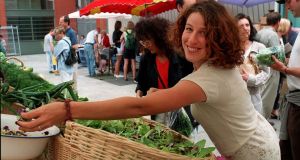 Organisers have been told that despite a weekly food market in the square, and several Christmas market stalls in the city, their market has been classed an ‘event’, under Covid-19 rules. File photograph: The Irish Times

Plans for a Christmas market in Dublin’s Temple Bar have been thwarted, despite having the support of the Garda and city council. The market, selling crafts and gifts, had been due to start at the weekend and run in Meeting House Square on Fridays and Sundays throughout the Christmas season.

However, organisers have been told that despite there being a weekly food market in the square, as well as a number of Christmas market stalls in the city, their Christmas market has been classed as an “event”, under Covid-19 restrictions. This meant only 15 people could be in attendance, including the stall holders.

“The HSE [Health Service Executive] has dictated that there can only be 15 people present at the market. With 12 stall holders, security staff and stewards, we could run a market, but we wouldn’t be allowed to have any customers. It’s Monty Pythonesque, ” said Martin Harte, chief executive of business representative group Temple Bar Company.

According to correspondence from Dublin City Council, the HSE’s Emergency Planning Unit advised the council the market would constitute an “organised outdoor gathering” and as such would be subject to Level 3 Covid-19 guidelines.

“Dublin City Council Events Unit will allow this event to proceed in principle on the strict condition that the maximum number of people (including staff, traders, security, members of the public) allowed in the event space at any one time is 15, as per national guidelines for Covid-19 Level 3 restrictions,” the council told Mr Harte.

However, Mr Harte has also received correspondence from An Garda Síochána, stating it does not consider the Christmas market an “event” within the meaning of the Covid-19 guidelines and it is supportive of the market going ahead.

“I note that there will be a limited number of stalls and that there is no music, live recorded or otherwise, no performances, no signage, no branding, no refreshments, no alcohol etc,” said Supt Joseph Gannon. “In this regard, a properly run Market will assist to displace some of the anti-social behaviour that occurs on this square by providing safe controlled activity, not allowing the build-up of persons attending or congregating in Temple Bar Square.”

He said he was satisfied the market “can proceed safely and in full compliance with prevailing Covid-19 guidelines/restrictions”.

Mr Harte said the market would have brought much needed footfall into the Temple Bar area. “We operate the weekly food market without incident. The Christmas market would also, clearly, have been a market not an event, but it seems the HSE is digging its heals in, even though there are Christmas markets in other parts of the city.”

Independent councillor Mannix Flynn said it was “an awful shame” the market was not being permitted. There was an “inconsistency in the interpretation of policy” when Christmas markets were permitted on Henry Street, but not in Temple Bar he said.

The council had last month said the Henry Street markets could not go ahead this year, but later relented following a consultation process with traders overseen by Lord Mayor of Dublin Hazel Chu.

A spokesman for the council said it was “happy to support a Christmas market in Meeting House Square”. In response to queries the HSE said the matter related to “the plan for Living with Covid” issued by the Department of the Taoiseach.

The cancellation of the market is the second recent blow to trade in Temple Bar. It emerged last week the council would not permit outdoor tables in the Temple Bar pedestrian zone, which runs from Eustace Street at the Norseman pub to Temple Bar Square.