Car door incident highlights what is wrong with insurance in Ireland 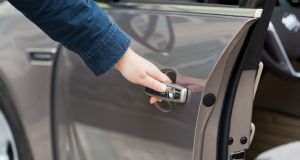 Elaine Donnelly says she has seen her insurance premium surge after a minor incident in a car park. File photograph: iStock

We had a couple of complaints about insurance – both car and travel.

Just more than five weeks ago Elaine Donnelly was involved in “a very minor incident where my car door hit another car door in a car park. A scuff mark existed which disappeared after polishing with a wet finger.” What happened next highlights much of what is wrong with the insurance industry in Ireland.

“The other driver became irate and took a photo of my insurance details. I photographed the scuff mark on the other car, and there was no damage to my car,” she says. “I contacted my insurer to inform them, in case of a fraudulent claim. No claim has been made to date by the other driver. Indeed, if one were to be made, my excess of €300 would more than cover the cost.”

But the story does not end there. “Meanwhile, my insurance renewal quote has been issued, and my premium has jumped from €487 to €1,276, a price gouging sum. I have full no claims bonus protection, with 10-years-plus no claims – 18 in fact, but not counted. My insurer has also stated on my no claims cert that I am at fault for a car accident with a claim outstanding. Thereby, preventing me from shopping around for a more competitive quote elsewhere. Apparently, there is no difference between a minor incident involving a car door in a car park and a motor crash that causes significant damage and injury. Informing my insurance company was on paper the right thing to do. However, in practice, [it comes with] a high cost to me in monetary and stress-inducing terms.”

Meanwhile, Gerald Duffy asked us to “give a big shoutout to VHI travel insurance”, but before the company gets out the champagne to celebrate some good news, it should probably know that he said that with his tongue firmly planted in his cheek.

He was prompted to mail us after getting an email confirming that his annual VHI travel insurance would auto-renew at the end of the month and the cost would be automatically deducted from his credit card.

“I had to phone VHI and cancel, and they even then tried to put me off, telling me that I would have access to exclusive airport lounges etc,” he writes. “A friend of mine only discovered his VHI travel insurance renewed in April at the height of travel restrictions when he looked at his Visa bill. Irate, he phoned them up and got a refund. Anyway, can you give a big shoutout to VHI travel, and their auto travel insurance renewal policies. ‘We are all in this together’, except of course VHI, who are in this for the profits.”

Boy settles for €450,000 hearing loss treatment case against HSE 14:01
One in five young people have experienced abuse by partner, study finds 13:52
December sky: Jupiter and Saturn to appear closest to each other since 400 years ago 13:52
Boris Johnson confirms Santa is ‘ready and raring to go’ 13:42
Recipients of PUP to get Christmas bonus on December 8th 13:36