Surely bank holidays were invented so that all workers could take time off at the same time? 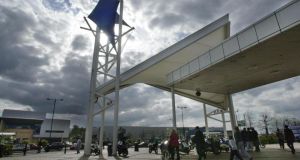 Any city dies a little on a bank holiday weekend . . . Life is taken, by car, to suburban shopping centres. Photograph Brenda Fitzsimons

This column is not for people who are worried about teenagers having threesomes – we are thinking about that a little too much. And, on a point of information, I want to know why most of the threesomes so lovingly discussed and lavishly illustrated last week consisted of two girls and a boy? Do two boys and a girl not add up to three? Perhaps I’m just old-fashioned.

No, this column is for people who don’t like bank holiday weekends. We are a persecuted and silent minority. But we want something in the Paper of Record, in case we meet with some fatal mishap.

Because people are very protective of their bank holidays. There is a sort of consensus about them being a wonderful thing, despite the panic-buying in the supermarket, the compulsory family time and all that driving. Yet there is a growing movement for change.

Let’s put it this way. We’re the people to whom Easter came as a big surprise. We know it’s a moveable feast, but do they have to keep on moving it?

More people than you think were shocked by the arrival of Easter. We’re the ones who don’t schedule, who don’t work in an office, who are retired or unemployed or live alone. In fact, like many groups presumed to be minorities (eg women) we’re probably the majority, when you think about it.

We’re the ones who woke up last Friday and said “Where the hell is everybody?” And found that everybody was on their way to the airport, or to the country, or to the superstore.

City dies
Any city dies a little on a bank holiday weekend. Public transport schedules all over the country, such as they are, collapse altogether. Life is taken, by car, to suburban shopping centres so that we can all get panic attacks in B&Q. Not that we are opposed to B&Q – we love B&Q, just not on bank holidays.

Yet – and this is the strange part – although the city enters a kind of limbo on a bank holiday, it goes without saying that all the shops are open, all the time, on bank holiday weekends. Thus completely removing any sense that either the holiday or the shopping is anything special. That’s because, as we all know, bank holidays are now about shopping, and for shopping. And of course the staff in all those shops, the type of worker for whom bank holidays were originally designed, back in 1871, don’t get the day off.

The employers, and perhaps even the unions – it’s hard to tell with unions these days – will say that the workers are entitled to another day off, in lieu for working the bank holiday. But surely bank holidays were invented so that workers could take time off at the same time, as a communal day.

Everybody off work together – wasn’t that what a bank holiday was supposed to mean? There is more shift work now – with all its implications for physical and mental health and of social isolation – than there was when manufacturing actually took place here. Because keeping the shops open is the main thing. (Note to retailers: You may just have oversold shopping. There is increasing anecdotal evidence of growing shopping fatigue, even among the most hardened and solvent of shoppers. Those clothes aren’t wearing out quick enough; you may want to look at that. You’re welcome.)

Gone missing
The other new feature of a bank holiday is how it bleeds into the surrounding seven days, and not just for the main RTÉ presenters who suddenly go missing from their posts (no jokes here about them going off to count their money). Good luck trying to get anyone in any office before this day next week.

And a bank holiday completely screws up the telly. It’s worse than Christmas for that. Someone has already noted that what modern life comes down to is that every religious feast is marked by an appearance by Andrew Lloyd Webber. I say again, is this what Pádraig Pearse died for?

Then there’s the news, which, short of a global disaster, also collapses on bank holidays. The radio news is reduced to recording the deaths of unfortunate people in road incidents. The television news is strangely quiet. We bank holiday haters are not news junkies, but we are nervy about the banking crisis in Cyprus.

Because there is only one thing more frightening than not understanding the European banking system, and that is looking at the people who do understand it. And wondering when they’re going to take your money away – again. Bank holidays have been used in the past, by the US and the UK, to readjust the banking system on the quiet.

We want that fellow Jeroen Dijsselbloem, president of the eurogroup, tagged. And watched. And followed by television cameras, 24 hours a day. There is a chance he could tell the truth again. This is no time for the television people to be on their holidays. At the moment your average person with money in the bank feels slightly like a duck at the start of the hunting season. And still the earth is shaking from the rush to get money into banks north of the border. Pity they’re closed today, isn’t it?

1:44 'Harvey Weinstein is exactly where he should be'