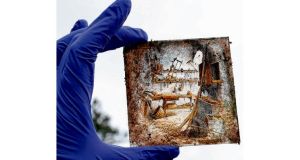 A glass plate slide found during excavations at a house in Fairview. photograph: brenda fitzsimons 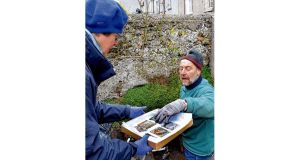 Archaeologists from the National Museum are excavating an ash pit at the rear of a house in which James Joyce and his family lived between 1900 and 1901.

The house is 8 Inverness Road, Fairview, which in Joyce’s time was known as Royal Terrace. This is the house where the family is recorded as living in the 1901 census.

The current owner, Stephen D’Arcy, who has restored the house, discovered the ash pit in the garden and began to investigate.

He soon discovered a number of glass slides and decided to call in the National Museum. The dig is being carried out by Mary Cahill and Andy Halpin, assistant keepers at the museum.

So far the main discovery has been a large collection of about 200 coloured glass slides, mainly on religious subjects.

It is possible that these were used in a magic lantern show or in some other form of display.

Further tests will be needed to see whether these were left there by the Joyce family or at a later stage.

Pieces of pottery and various kitchen utensils – the usual contents of such a location – have also been found.

The excavation began last Monday and is expected to conclude today. The finds have been stored carefully and have now to be analysed.

Ms Cahill said that the archaeologists were intrigued by the coloured slides and were hoping to establish their provenance through tests and checks of the records of the house’s occupation. It appears that an evangelical preacher lived there later. They were treating the site with the same care that they would give to any site of archaeological interest, irrespective of its age.

Mr D’Arcy said he was very pleased that the museum had taken such an interest in the find.

While it is unlikely that the excavation will yield any lost manuscripts, it is still the first such exploration of a Joyce location that has been undertaken.

The house is of particular interest because it is there that the fifth chapter of A Portrait of the Artist as a Young Man begins: Stephen, having had his face washed by his mother, sets off for the college down the lane at the back of the house, past St Vincent’s asylum, and makes his way eventually to the college on St Stephen’s Green.

The house appears as “8 Royal Terrors” in Finnegans Wake, but that is not necessarily a reflection of Joyce’s experience there.