Two-thirds of people say Ireland is too politically correct

Sign of the Times: Survey suggests fear of change as 47% say we are ‘losing Irishness’ 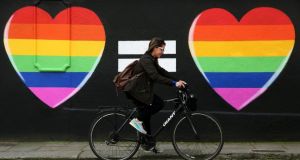 Marriage-equality referendum: 54% of adults said they felt pride in the result; 46% felt neutral or had no pride in it. Photograph: Brian Lawless/PA Wire

The results of the 2019 Sign of the Times survey by Behaviour & Attitudes are published by The Irish Times today. The annual snapshot of Irish life combines quantitative and digital qualitative techniques with B&A published data on the economy, health, technology and shopping. The research was conducted in January and February 2019.

Could we be seeing the first straws in the wind of a backlash against a more progressive Ireland? Not everyone in Ireland seems equally welcoming of recent societal and cultural developments, suggests research published today by Behaviour & Attitudes.

These are provocative questions, designed to take the temperature of people’s mood and instinctive reactions at a moment in time

Taken individually, none of these statistics tells the whole story. It’s possible that, for instance, some people think we are losing one form of Irish identity to gain other, more inclusive ones. The term “political correctness” carries a lot of baggage, and there’s likely to be a wide spectrum of views and attitudes captured in that 69 per cent. So too do the phrases “foreign national influx” and even “Irish identity”. And “everything changes too quickly” could mean many different things.

These are provocative questions, designed to take the temperature of people’s mood and instinctive reactions at a moment in time. “They’re designed to try to tease out from every single perspective what people really feel about the social issues of the day. Yes, they are pointed statements, but not leading statements,” because people can respond in a range of ways from “strongly agree” to “strongly disagree,” Ian McShane says, executive chairman of B&A. It is the first time such questions have been asked in the annual survey.

“The intention is to prompt and provoke, to some extent, an honest appraisal of people’s views on those issues.”

McShane says it was in the context of Brexit and Trump and “a sense of creeping negativism” that a decision was made to include questions on these issues. “I felt that we’ve been great at patting ourselves on the back in Ireland in the past three to four years in particular at how open, transformative and tolerant our society has become, and yet Peter Casey gets 23 per cent of the vote in the presidential election through striking a few chords. So we wanted to tease that one out.”

The discrepancy between the numbers who voted in favour of marriage equality, and the number who feel “pride” in the result might, McShane suggests, be explained by those who voted in favour of it based on human stories. “In the lead-up to the referendum, I happened to do a lot of research among older rural voters who would say ‘I’m not going to vote’ or ‘my granddaughter explained it all to me and I’m voting yes’, or ‘So and so from ‘Ballymagash’ down the road is gay, so I’ll probably vote yes’. I can see those people saying ‘No, I didn’t take pride in the result, but I voted yes’.”

Prof Ian Robertson, emeritus professior of psychology at Trinity College, points out that because of the way our brains are wired, a survey taken in the immediate aftermath might have revealed different results, as we rode the dopamine high. Now, marriage equality has become something we take for granted. He suggests that the frustration with political correctness expressed in the survey might be a reflection of current debates around language and identity politics.

More significant and perhaps more worrying, he feels, are the findings on immigration and “people being a bit estranged in their own country”.

To date, he says, Ireland has been “very good comparatively speaking at making immigrants feel welcome. I don’t want to be Pollyanna about this, but we are a tolerant, inclusive society.”

Young, tech-savvy people thrive in a globalised world and are going to have multiple identities – Irish, European, global citizen – which is a wonderful diluter of prejudice

But “what we saw with both Brexit and Trump was people feeling the rapidity of social and technological change was quite dizzying. And if you’re older and less educated, it’s even more dizzying, partly because you’re less able to benefit from the advantages of it, and more likely to suffer disadvantages.

“The young, bright-eyed, nimble on their feet, tech-savvy people thrive in a globalised world and are going to have multiple identities – Irish, European, global citizen – which is a wonderful diluter of prejudice.”

In the coming years, “there’s going to be exponential changes in technology, work and the social fabric, which are going to exaggerate this difference between educated people with flexible identities and transferable skills” and those with more traditional notions of identity. As a result, he suggests, “these trends identified in the data are likely to increase”.

So are these survey results a straw in the wind? Says McShane: “There are these concerns and fears bubbling not so deeply beneath the surface. [So] if somebody came up with a political proposition built around that they could do quite well. Should we be worried? Should America have been worried six months before Trump [was elected]?”

“There is a basis for a backlash there. The seeds of a backlash have been sown and are growing beneath the surface.”