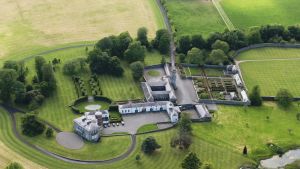 When Corbalton Hall last came to the market in 1999 it was described by the media as “one of the finest tillage farms in Co Meath”.

Home to the Corbally-Stourton family for 150 years, the family sold up in 1951 to German buyers who intended to renovate an older part of the house which dated from the 1700s. They knocked the older structure, but never completed their intentions.

Essentially what was sold in 1999, for a sum believed to be about £3.4 million, was a later addition to the house dating from the early 1800s. This three-bay façade with Ionic portico was designed by eminent architect Francis Johnson, whose legacy includes some of Ireland’s most prominent private and public buildings: the GPO on O’Connell Street, Armagh Observatory and what is considered his finest design for a private home Townley Hall.

The current owner, serial entrepreneur Pat McDonagh, began his career as a teacher, before realising his dream to educate children through computers. In 1983 he established Computer Based Training with a £15,000 loan, and by 2001 was listed as the top earner in Ireland on the Sunday Times pay list, with his company Riverdeep earning him about £107 million for the previous year. Riverdeep at one stage was valued at €1.5 billion. It is estimated that over the years his astute investments have amassed an estimated €500 million personal fortune.

The property lies on 358 acres just outside the village of Skryne, near to Ratoath and Dunshaughlin, and boasts one of the largest fields in the country – which is now a sweeping lawn as far as the eye can see.

To say the house and grounds have been renovated is an understatement. The works to the cottages in the walled garden alone are testament to the painstaking detail – and considerable financial investment – undertaken to bring this important house and gardens back to their former glory.

It is clear that this project was a labour of love, with an appreciation for and adherence to, its due conservation.

What is immediately apparent in the older part of the property is the natural light – and this is true for every room at both garden level and the upper floor. In this section lie both an inner and outer hallway, flanked by a drawingroom and a diningroom on either side. Proportions are immense: the current dining table appears so diminutive against the scale of a room that would happily accommodate a table for 40 or 50 guests.

A new extension was added the site of the older structure, which the German family knocked in the 1970s, adding a butler’s pantry, a secondary kitchen and the kitchen proper. Running alongside is a wooden conservatory, which overlooks an ornamental pond, as does a library.

Upstairs are five bedroom suites and a further reception room with views to the front lawn through a Wyatt window.

The basement restoration, which was a warren of dilapidated rooms, is simply outstanding. It has a private cinema room, and a wine and beer cellar all centred off an informal entertaining space. What is impressive is that despite the size the rooms speak of quiet relaxation rather than ostentatiousness, as can be the case with houses on such a scale.

The stable yard to the rear of the house, which now stretches to 1,161sq m (12,500sq ft), has been given equal consideration in its renovation, and offers a coach house and apartment as further accommodation. In addition, there are many cut-stone outhouses, which feel like a tiny private village.

The kitchen garden – on a par with many State-run gardens – is set within trimmed geometric hedges, and the two conservatoires are lined with seedlings trays ready for this years’ planting.

Corbalton Hall is a special place and were he alive today I think Mr Johnson might agree.

As the McDonagh children are leaving their nest the estate is now on the market through joint agents Goffs and Coonan Property. It is being sold as three lots: the house, buildings and 132 acres is seeking €8 million; 226 acres of prime tillage lands is seeking €3 million (equating to €13,000 per acre); and finally the entire estate on 358 acres has an asking price of €11 million.

As for agricultural use, corn, potatoes and dairy farming are synonymous with Co Meath. Potential leasing income is about €200 to €400 per acre depending on crops, and the estate has four entrances so if the house is sold separately to the tillage lands it will not impact in the least on new owners.

Co Meath is also famed for horse breeding, and the estate could also work as a world class equestrian centre with ample room to facilitate accommodation in the many quaint outhouses.

Corbalton Hall is a special place – the attention to detail in its preservation and expansion is evident in the tiniest minutiae – and were he alive today I think Mr Johnson might agree.

Irish in America: Share your views on the protests
10