Walk for the weekend: A visit to one of Ireland’s great wilderness areas 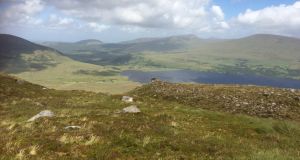 The vast uninhabited wilderness dominated by the Nephhin range held me entranced.

My offering this week comes from the lobby of the Westport Woods Hotel, where I have laid claim to the most comfortable armchair.

My justification is that I had earlier hiked the Nephin Mountains and explored one of Ireland’s great wilderness areas. If you haven’t been you really should go for this is an unforgettable place.

This dawned upon me as I approached the start of my walk for the access road seemed to almost float above an island strewn lakeland. On foot, it was down a quiet lane and through a couple of gates before breaking right to follow an informal trail to the Cloch Willy Stream. Here, it was uphill on reasonably benign terrain until the stream disappeared and I struck out for the col above Lough Doo and the first “wow moment “of my walk.

Laid out below was a place where nature prevails and almost nothing has been altered by human hand. Nephin Beg stood sentinel to the north, while beyond was Slieve Carr – queen of the Nephins and generally regarded as Ireland’s’ remotest mountain. Here, it occurred to me that this empty landscape of lonesome loughs, isolated mountains and blanket bogs might be straight from a Paul Henry painting.

Uphill, by the cliffs above Lough Doo, eventually led me to the cairn marking the 582m summit of Bengorm and into the southern extremity of Ballycroy National Park.

This vast uninhabited wilderness dominated by the Nephin range held me entranced for a time and put me in mind of the stark melancholic landscape typical of Scotland’s northern Highlands.

So unforgiving is the terrain that the area historically remained unpopulated except for a few, now abandoned, farms along the Bangor Trail: an ancient drover route that has now morphed into Ireland’s most isolated hiking route. Ambitious plans for the area now involve ceasing commercial forestry operations and creating a network of backcountry trails for adventurous walkers.

A rollercoaster ridge runs dreamily northwest from Bengorm to the 714m summit of Corrannabinnia (not named on OS maps) before crossing a most undreamily exposed arête and descending benignly to complete the famous Glendahurk Horseshoe.

I considered giving it a go but it was already afternoon with the weather closing in, so reluctantly, I began descending south. Directly ahead lay Clew Bay with its innumerable islands all pointing in the same direction having been created when a great glacier moved over the area. Beyond lay Clare Island, which from this angle reminded of a great ship at anchor in the mouth of the bay.

Rain-splattered I descended a broad shoulder to Oghillees Mass rock. Clearly, this spot was deliberately chosen as an excellent vantage point for identifying the approach of hostile forces during the celebration of a penal mass. A track, used by the faithful for countless generations led me downhill to a bog road where I followed left the markers for the Western Way. With the wind rising and rain now bucketing down, I was glad that these helpful arrows led me uneventfully back to my start point.

Getting there: from Newport, Co Mayo take the N59 west. After about 5km go right past Derrada Community Centre, go left at Salmon Leap Bridge and left again at a T-junction. Park before reaching a gate.

Mary McAleese: ‘I’m a bit of an ’oul interrupter. That’s what I hope to be’
8