Tourism Authority of Thailand plans to promote cave where soccer team was trapped, but Irish experts recommend caution when engaging in 'adventure tourism' 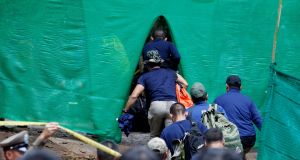 It has emerged that the Tourism Authority of Thailand is making plans to promote Tham Luang cave in Chiang Rai, where a dramatic rescue of a children’s football team was completed on Tuesday, as a major tourist attraction.

The authority’s director at the Chiang Rai office, Karuna Dechatiwong, was quoted by the Bangkok Post as saying the organisation would work with local officials and the private sector to promote the cave as it anticipates a bounce in tourist numbers following the rescue.

“After the rescue team found the 12 young football players and their coach . . . the cave has become of interest for both local and foreign travellers,” she said, adding that the tourism agency is ready to work out a route to the cave and other destinations in Chiang Rai.

The promotion of the province as an adventure destination has also been floated by Thailand’s tourism and sports minister Weerasak Kowsurat and Chiang Rai governor Narongsak Osot-Thanakorn.

Is there any circumstance in which you can picture a Tourism Ireland official suggesting that the nation capitalise on the scene of such drama and tragedy (a navy seal died during the rescue operation) by opening up a dangerous underground cave prone to disastrous flooding to tourists?

Of course not. But in Thailand there will most likely be many takers – at least in the short term - and many people will view a trip to the cave as the crowning achievement of a year adventuring around the world or a fortnight travelling through Thailand.

Adventure tourism is certainly big business and it is getting bigger. Worldwide it is valued at more than €250 billion or more than twice the estimated worth of the international cruise business. Its attractions for a largely young cohort are not hard to see – particularly in the era of Instagram when people can show the world how daring they are and how amazing their trips are in real time.

Caving, climbing, whitewater rafting, scuba diving, surfing, paddle-boarding, snowboarding and throwing yourself off a bridge over the Zambezi spitting distance from the Victoria Falls are just some of white knuckle offerings available to adventurous travellers now.

But there is a word of caution. In Ireland – and in many other developed countries – health and safety legislation as well as fears of litigation and exacting standards set by insurance companies – mean that such activities can be embarked up with a degree of comfort.

But other countries are not so concerned about the welfare of those embarking on adventures and while that may make some experiences more authentic, it also makes them more dangerous.

Since 2008, the US-based Adventure Travel Trade Association (ATTA) in collaboration with the George Washington University has produced an Adventure Tourism Development Index (ATDI) which assesses the potential of and readiness for countries to compete in the global adventure tourism market based on their scores in multiple categories.

When it comes to the safety category it examines if adventure operators provide for the safety of travellers and if facilities exist to cope with travel-related injuries.

For example, in destinations where scuba diving is a popular draw, it asks if hyperbaric chamber facilities for decompression exist. In destinations where mountaineering is prevalent it questions if rescue operations are available and if guides have first aid training. More broadly it asks if the client safety offered meets internationally accepted standards.

They are not bad questions to ask as a starting point.

The Department of Foreign Affairs also offers adventure tourists some advice. “Before you travel, or before your next destination, you should do some research and check out the reviews, tips and advice offered by other travellers,” it says.

“There are many trusted guidebooks and websites available for backpackers. In particular, you should ensure that tours, travels and activities are bought through respected tour agencies. This can ensure that you receive value for your money and ensure your safety if booking adventure sports activities.”

The department also recommends that tourists leave a copy of their itinerary with friends or family at home and leave a photocopy of passports and other documents – including travel insurance policies and tickets with someone at home as well as a scanned copy in their email in case of an emergency.

It is also important to check and recheck travel insurance companies. At the bare minimum a good travel insurance will cover medical expenses, medical evacuation and cancellation and well as theft of property. But anyone planning to do extreme sports will have to make sure they are covered for them.

Until recently David O’Hara ran a stand-up paddling boarding school in Co Sligo and was one of the first adventure tourism ambassadors appointed by Tourism Ireland.

“A more accurate phrase to describe ‘adventure tourism’ would be ‘experiential tourism’ as it really is about having experiences, many of which would not be understood as ‘adventure’,” he starts.

He points out that a seaweed bath in Strandhill “is a total adventure for anyone who has not had one” while “practising yoga on a SUP [stand-up paddleboard] is very much an adventure” although it is not as white knuckle as careering down a mountain.

“The term ‘adventure’ will stick however as experiential is not a very marketable word and lacks the excitement of the former,” he says.

He stresses that every provider “must have insurance, should have qualifications and must understand their service from their tourists’/customers’ perspective. I believe that after insurance, many providers fall down on the ‘understanding’ part. Would you want a SUP ‘lesson’ or a SUP ‘experience’. Do you want to be ‘taught’ or would you like to be guided? The words ‘lesson, class, instructor, instruction, teach etc’ were never used at SUP for all, we took people on an adventure which they would never forget and we did it with maximum safety.”

He also wonders if Irish adventure tour operators could learn something from those overseas rather than the other way around.

“Ireland tends to take a ‘belt and braces’ approach and often you will see people needlessly over safety’d [sic] to the point where the experience is diminished and participants feel afraid, insecure and unable to participate.”