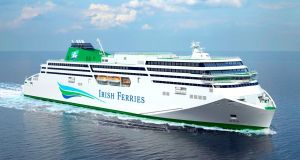 An artist’s impression of Irish Ferries’ WB Yeats. Delays in building the ferry have resulted in almost 30,000 passengers’ trips being cancelled

While thousands of passengers whose holidays were scuppered by the announcement that Irish Ferries had cancelled all sailings on the WB Yeats until the middle of September were disappointed, many were equally enraged by how the problem has been handled.

Social media lit up on Tuesday and Wednesday as people expressed frustration at their inability to make contact with Irish Ferries to try and rearrange crossings to and from France in the weeks ahead.

Colm O’Connor had his family holiday booked and was due to leave Dublin on August 17th. “I got the same group email that everyone else got yesterday from Irish Ferries and the phone line has been jammed since the news broke so I couldn’t get through. It is unacceptable for this to happen and then not to have the resources in place to deal with the aftermath,” he said.

It was the same story for another would-be passenger, David Dinsmore. He called the company multiple times and found it impossible to get through. He was also unable to leave voicemails as the mailbox was full. “I can sympathise with them for being let down by the shipbuilders but there’s no excuse for not being able to cope with the predictable volume of calls from customer,” he said.

Astrid Fitzpatrick had been booked to travel on the WB Yeats to and from France. She told The Irish Times that every time she called the company after hearing about the cancellations the call “gets cut off after seven minutes”. She said there had been “no response to messages either. First holiday in 10 years and this happens,” she said.

“I booked and paid in full for a ferry crossing from Dublin port to Cherbourg on August 1st,” said John Murray His plan was to bring a classic car to Spain for his daughter’s wedding. “I have several hotels booked along the trip which now have to be cancelled. I have a return flight back to Dublin which I will now have to cancel. Irish Ferries have not contacted me. I have logged 17 calls to Irish Ferries all of which are disconnected after seven minutes.”

Louise Maguire had a possibly even more frustrating experience. “We were originally booked to sail on Friday , July 20th to Cherbourg, returning on Thursday, August 2nd. When the first cancellation was announced [in April], we were able to get an alternative outbound sailing on Friday, July 21st, losing a day of our holidays,” she said adding that they did not think that was too bad.

“My husband was lucky enough to get through to Irish Ferries yesterday afternoon when the news broke of the further cancellations. Even at that early stage there was no availability for the Wednesday or Friday sailing, we now have to sail home on Sunday 5th August. We are trying to secure three extra nights accommodation on various campsites; prices vary from €375 to €500. Amazing to think really that Irish Ferries had no contingency plan in place should the WB Yeats not be ready on time.”

Joe Gogan received the bad news from Irish Ferries via email at exactly 3.46pm on Tuesday afternoon. “I have been trying to make contact by phone on the number they advised to phone from 4pm yesterday to 11am [on Wednesday] . Why do they give out a phone number without applying the resources to answer that number? I have attempted to make contact over 60 times to be advised by a recorded message to “try again”... this is far more frustrating than reading the original email message.”

Conor Hoey echoed the concerns of many when he expressed disbelief that he had been contacted by Irish Ferries only a week ago asking for the outstanding payment for his trip on the WB Yeats. “ So I made my outstanding €800 payment two days ago. I have a car train booked from Nice to get me to Paris two days before travel back from Cherbourg. All paid in advance.”

He also has hotels booked in Paris and Honfleur, which are also fully paid in advance. “Any major change to my plans (for example having to go to Roscoff) will cost me a fortune. This is shambolic from Irish Ferries. I’d like to cancel everything and fly instead, but Ihave so many hotels pre-booked over a three-week period, that it would cost me a fortune. If Irish Ferries had an inkling that the August deadline would not be met, they should have told travellers back in April and given us time to re-organise.”

The company accepted there had been problems with communications after the anouncement was made. It said it had been dealing with “an extremely high” volume of calls and had to contend with “a technical fault” on Tuesday which was “external to Irish Ferries”.

It said that by 4pm on Wednesday it had transferred customers on approximately 25 per cent of the affected bookings, “the vast majority of which are being transferred to alternate Irish Ferries sailings”.