The ‘WB Yeats’ debacle has cost Irish Ferries €6.5m, but the loss of trust could cost it a lot more 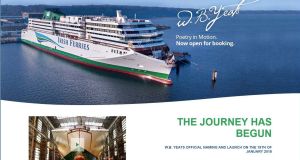 The Irish Ferries Webpage on June 13th with an image of the “WB Yeats”. The ferry company tried to rent another vessel of comparable size through international brokers

Last September Irish Ferries announced that work had started in a German shipyard on a €144 million ship that would be the pride of its fleet. It said that, in accordance with tradition, a specially commissioned ceremonial coin would be placed in the keel during construction to “bring good luck and calm seas for the vessel”.

The coin has not done its job.

The “WB Yeats”– as the new boat was named follow

ing a public competition that attracted tens of thousands of submissions – has been dogged by bad luck, and its failure to arrive in Ireland on schedule ahead of a busy season of summer crossings has done untold damage to the reputation of Irish Ferries and left the holiday plans of tens of thousands of Irish passengers all at sea.

News that things were going awry with the luxury ferry – which has space for 1,885 passengers and crew, 440 cabins including suites with private balconies, and 3km of car deck space – first reached The Irish Times on April 20th. “There are rumours that Irish Ferries new €144m ship, which is scheduled to take passengers from Dublin to Cherbourg from July, is delayed by a few weeks,” a mail from a reader and would-be passenger started.

It was more than a rumour. After The Irish Times broke the story online a day later, all hell broke loose. Irish Ferries confirmed it was cancelling more than 2,000 bookings for two July weeks, which would affect the holiday plans of about 10,000 people.

In emails sent to affected passengers, the company’s managing director, Andrew Sheen, said it had “just been informed by the German shipyard building the ‘WB Yeats’ ... that her delivery to Irish Ferries is likely to be delayed”.

Passengers due to travel on the “WB Yeats” through August and September were assured it would be plain sailing for them. Weeks passed and all was calm until, suddenly, the story took a turn for the worse.

Last Monday, by its own account, Irish Ferries received word from the FSG, the German shipyard where the boat was being made, that although the vessel was largely completed, a significant amount of electrical work had still to be done by a subcontractor. As a result, the “WB Yeats”would not arise and go to the Isle of Ireland until September.

The ferry company tried to rent another vessel of comparable size through international brokers. When that proved impossible, it released a short statement that, once again, blamed “extraordinary circumstances beyond its control” for the cancellations.

“Because of the uncertainty caused by this additional delay, Irish Ferries has no option but to cancel all the planned sailings to France for ‘WB Yeats’ this summer,” it said.

Customers were offered a number of alternative travel options including alternative sailings to France on the “Oscar Wilde”, or a “land bridge” that would see them sailing to the UK (from either Dublin or Rosslare) and then on to France.

Sheen told The Irish Times that the company felt “very disappointed and very let down” by the shipyard. “All we can do is apologise at this stage,” he said. “We are accountable but we are not the shipbuilder – we do not build ships.”

The statement from the shipbuilders barely referenced the delays and offered no apology and did not acknowledge the disappointment of its customer. “Due to delays in the delivery of interior components for public areas and on the electrical system installation in the hull and deckhouse, work on the new build will continue for a few weeks,” it said.

“All the key functions of our shipyard and our key suppliers are on the ship, and meet daily to ensure direct and efficient communication,” FSG chief executive Rüdiger Fuchs added. “Our team is fully focused on completing [the ‘WB Yeats’]. To overcome delays in the delivery of interior components intended for the public areas of the ferry, FSG has made additional funds available to pay second level suppliers directly.”

While Irish Ferries may not be able to build ships, it should have been able to answer telephones. But even that proved difficult in the aftermath of the second wave of mass cancellations.

Frantic passengers, desperate to make contact to see what they could salvage of their holiday, could not get through to Irish Ferries

As its helplines were deluged with calls, the company – and its reputation – started to sink further. Frantic passengers, desperate to make contact to see what they could salvage of their holiday, could not get through to Irish Ferries. Emails were ignored. Messages on social media went unanswered. And then the phone lines crashed, with Irish Ferries again blaming outside forces – this time it was their telecoms provider.

At 8pm on Tuesday, the staff manning what phones were still functioning knocked off for the day with thousands of calls unanswered. Would-be passengers fumed.

“I booked and paid in full for a ferry crossing from Dublin port to Cherbourg on August 1st,” said John Murray who had planned to bring a classic car to Spain for his daughter’s wedding. “I have several hotels booked along the trip which now have to be cancelled. I have a return flight back to Dublin which I will now have to cancel. Irish Ferries have not contacted me. I have logged 17 calls to Irish Ferries all of which are disconnected after seven minutes.”

After Joe Gogan received the bad news he tried and failed to contact the company more than 60 times, and each time he was told by an automated answering service that he should try again. This is far more frustrating than reading the original email message.”

Louise Maguire had a possibly even more frustrating experience. “We were originally booked to sail on Friday, 20th July, to Cherbourg, returning on Thursday, August 2nd. When the first cancellation was announced [in April] we were able to get an alternative outbound sailing on Friday, 21st July – losing a day of our holidays,” she said, adding that they did not think that was too bad . . . until the August sailing was cancelled too.

“My husband was lucky enough to get through to Irish Ferries yesterday afternoon when the news broke of the further cancellations. Even at that early stage there was no availability for the Wednesday or Friday sailing. We now have to sail home on Sunday, August 5th. We are trying to secure three extra nights accommodation on various campsites – prices vary from €375 to €500. Amazing to think really that Irish Ferries had no contingency plan in place should the ‘WB Yeats’ not be ready on time.”

Again, the company was on the back foot and 24 hours into the crisis it had dealt with only a quarter of those affected. “Irish Ferries understands that it has been frustrating for some customers trying to get through to us,” a spokeswoman said with considerable understatement.

Cost of the crisis

The cost of the crisis to the company is uncertain. Industry analysts at stockbrokers Goodbody and Investec have calculated that the cancellations, along with the resulting compensation and rebooking of passengers on alternative services, could set Irish Ferries back €4.5 million, on top of the cost of more than €2 million it had to pay for for the first round of cancellations.

What happens next very much depends on the regulator

But the reputational damage will be much harder to quantify. “Our customers and their goodwill is of utmost importance to us, which is why we making every effort to minimise the impact of this event – which was unfortunately entirely outside of our control – on our customers by advising them as soon as possible and assisting them with alternative arrangements to enable them to continue their holiday plans,” the Irish Ferries spokeswoman said.

What happens next very much depends on the regulator. The National Transport Authority has said it is “extremely disappointed” by the cancellations, and is examining whether the thousands of affected passengers will be entitled to compensation above and beyond the €150 voucher the company has offered to anyone who chooses to sail with the company next year.

Many of those who have been offered the voucher have labelled it derisory.

It remains to be seen just how many of them will be willing to put their trust in Irish Ferries again.