Surge in complaints to watchdog over airlines’ refunds delay 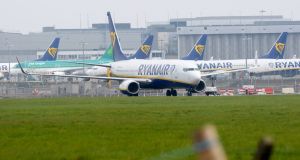 Planes lined up at Dublin Airport due to the coronavirus Covid-19 pandemic. Photograph: Alan Betson / The Irish Times

Ireland’s aviation watchdog has seen a significant rise in complaints since the start of this week over the refusal of several airlines to offer refunds for cancelled flights in a timely fashion.

Ryanair passengers furious at the offer of credit notes instead of cash refunds have made up the bulk of those complaining to the Commission for Aviation Regulation (CAR). However, people who had been scheduled to fly with Aer Lingus, British Airways and other leading airlines across Europe have also lodged formal complaints.

The number of queries and complaints received by the CAR started to rise in early April, hitting around 25 a day last week, and rising to almost 200 a day on average this week, The Irish Times understands.

The commission has declined to release exact figures but it expects the number of complaints to rise again next week.

The aviation regulator, which oversees consumer rights when it comes to all air travel out of Ireland, has repeatedly said that people whose flights have been cancelled as a result of Covid-19 are entitled to refunds. In spite of this, almost every major airline operating in the EU is offering vouchers in the first instance as they face the worst crisis in the history of commercial aviation.

Passengers who hold out for refunds are not being given any indication if and when such refunds will be processed. In the normal course of events, refunds must be processed within seven days.

For weeks Ryanair had been out of step with most other airlines in Europe in promising no-quibble cash refunds but its U-turn came as several countries across the EU moved to change the rules to allow airlines offer credit notes instead of full refunds. Minister for Transport Shane Ross is considering a similar step in Ireland.

The regulations governing flight cancellations were “important consumer-protection provisions”, a spokeswoman for Mr Ross’s department said, but Covid-19 posed enormous challenges about how to protect “jobs and at the same time stand over consumer protections”.

There are concerns across Europe that forcing airlines to issue cash refunds instead of vouchers to all impacted passengers, coupled with virtually no bookings through April and May, could lead some into bankruptcy causing thousands of job losses and ultimately diminishing the level of completion in the sector once the crisis abates.

On the surge in consumer inquiries, a CAR spokesman said: “This week’s daily figures show a significant increase of multiples of the levels of complaints and queries that the commission has received thus far this year.

“Passengers should be aware that they should contact their airline first and go through their complaint handling process before making a submission to the commission.”

Both Ryanair and Aer Lingus insist they are fully compliant with EU regulations governing refunds with Ryanair stressing that while it was offering passengers vouchers now, it would get round to processing refunds at some point in the future when the Covid-19 crisis lifts.

It said as a result of the grounding of more than 90 per cent of its fleet in recent weeks it was “having to process 10,000 times the usual volume [of refund requests] and have fewer staff available due to social-distancing measures”.