Bangor is an energy: how music has fuelled the rise of this seaside town 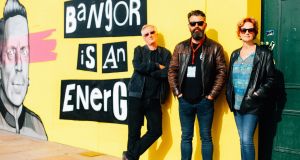 The lyrics of the Joni Mitchell song Big Yellow Taxi danced around my head on a summer trip to the seaside town of Bangor, Co Down.

“They paved paradise,” Joni sang, “and put up a parking lot.”

That’s exactly what “they” – local councillors in this case – did in Bangor in the 1990s. The sea used to come right up to the town centre before it was decided that a car park would make better use of the space.

“I know,” says Alison Gordon, when she sees my unimpressed reaction to the car park revelation. Gordon runs the Open House Festival with her husband Kieran Gilmore, and is filling me in on the town’s fortunes as we walk past the sea-cancelling car park.

In its heyday, Bangor was a buzzing seaside resort, known for dance halls run by Italian immigrants such as the Capronis and the Milanos. There were hotels, guest houses, ice-cream parlours and a harbour with a wooden pier and a small beach.

“Back then Bangor was known as ‘the Brighton of Ireland’, and attracted tourists from all over Northern Ireland and Scotland,” says Gordon. The decline came, as it did for many other seaside towns, with the rise of foreign package holidays luring people to sunnier spots. When the marina was built 30 years ago – the largest in Northern Ireland – the controversial car park was created between the marina and the original sea wall to support the burgeoning retail sector that had replaced the town’s attraction as a seaside resort.

The retail sector has since waned, and for a few years now there has been a growing realisation that Bangor needs to reclaim its identity and reconnect the town centre with the sea. Those like Gordon and Gilmore who want to help with the rejuvenation are looking to UK towns such as Margate, Whitstable, Hastings and – naturally – Brighton for inspiration.

The couple met in the early 1990s in London through the music scene.

“Kieran was from West Belfast and I was from Bangor,” says Gordon. “So we were from different sides of the political and religious divide – although neither or us were particularly political or religious.

“We got very involved in the trad music scene in London, which was undergoing a revival at the time, and started bringing musicians over from Northern Ireland and touring them around folk festivals in England and Scotland.”

In a timely intervention, a friend from Belfast, Stephen Dunlop (now the chair of Open House), gave them a report called The Art of Regeneration, which introduced the concept of reviving areas through arts and culture, and set them off on a new career path.

The couple had also seen how cities like Glasgow and Dublin were changing their cultural identities through arts activities. When the Belfast Agreement was signed in 1998, they decided to go back home and start a folk festival in Belfast’s newly designated Cathedral Quarter, with the aim of helping to create “a vibrant and inclusive arts and music scene and a destination for cultural tourists”.

In 2013, with the Cathedral Quarter thriving and Belfast having undergone an economic and cultural transformation, they moved the Open House Festival to Bangor, where they had been living and bringing up a family, to try to kickstart a similar revival.

Bangor now has an opportunity to capitalise on its natural, historical and cultural assets, and reinvent itself as the key seaside resort in Northern Ireland

By any assessment, they’ve done a great job. In a couple of days in Bangor last August, we got a real taste of a vibrant programme of events from a brilliant Bluegrass Picnic in Ward Park to a palette-tickling whiskey tasting in the back bar of the famous Fealty’s pub.

The highlight was Folk on a Boat, a jaunt out on the sea with a bottle of prosecco and a musical guide in the form of singer and storyteller Davy Lennon – a retired barrister and local amateur historian. Lennon is a collector of hilarious, moving and often bawdy local folk songs, along with his son David. Even a lone mackerel-fishing woman on a kayak giving us the finger for disturbing her afternoon expedition couldn’t take the shine off the afternoon.

We also enjoyed the Bangor Rocks Music Tour celebrating the town’s musical history while driving around town in a vintage bus – the town has connections to Thin Lizzy, Rory Gallagher and even Suzi Quatro. Bangor also happens to be the hometown of Snow Patrol, Foy Vance and Two Door Cinema Club.

The guide was Paul Corken – a local who, in his teens, was a member of Bangor punk band The Doubt. The best story involves the band’s first gig in the local public toilets and the ingenious use of multiple extension leads to get power from one of the band’s houses. Bangor had a vibrant punk scene in the late 1970s – immortalised in the song Alternative Ulster by Stiff Little Fingers: “There’s nothing for us in Belfast/The Pound’s old and that’s a pity/Okay, so there’s the Trident in Bangor/And then you walk back to the city.”

This is a hotel for dogs and for people. And if you don’t like pooches, it won’t be your bowl of pedigree chum

We are staying in the Salty Dog, a boutique hotel created from two Victorian townhouses. It has glorious views out to sea – and Scotland on a clear day – and it’s located beside a walk that curves dramatically around Bangor Bay. Just inside the lobby, a soporific Dalmatian is stretched out at his owner’s feet, a dog bowl half full of water nearby.

There are dogs everywhere, and that’s when I twig that the hotel’s name is not just a seafaring reference. This is a hotel for dogs and people. And if you don’t like pooches, it won’t be your bowl of pedigree chum. The food for both animals and people is top-notch in the hotel’s bistro, by the way. We get one of the best laughs of our trip there as we listen to a group of English tourists ask the waiter when the specials are on. “All the time,” she says. “Today we’ve got pulled pork.” It turns out the English men meant the band The Specials who were playing at the festival that night.

The month-long Open House festival harnesses the best of the town, including producing Bangor’s own locally brewed festival beer. The venues which hold the events range from cosy pubs to that vintage bus. This year there were more than 160 events, attracting nearly 40,000 visitors, and there are gigs and events planned all year round.

The town is increasingly attracting interest from outside Northern Ireland. Wayne Hemingway, the founder of Red or Dead, became involved with Bangor when he was appointed as a consultant to the planned £50 million redevelopment of Queen’s Parade on Bangor seafront. He has this year also been appointed as a consultant on the planned £63 million Masterplan for Bangor Waterfront, which will transform 3.2km (two miles) of coastline around Bangor, as part of the Belfast Region City Deal.

“Timing is everything,” he said. “Bangor now has an opportunity to capitalise on its natural, historical and cultural assets, and reinvent itself as the key seaside resort in Northern Ireland.”

On that note, the festival is in the process of acquiring the former Court House on Bangor seafront, a Victorian listed building which the organisers hope to turn into a year-round venue and permanent home for the festival. The restoration project will spearhead the planned regeneration of the seafront.

No wonder former Sex Pistol Johnny Lydon, when asked to visit the festival last year, coined the phrase “Bangor is an energy”, utilising a line from his own PiL song Rise.

They may have paved paradise, but green shoots are sprouting up all over this plucky seaside town.

For more on the Open House Festival, visit openhousefestival.com