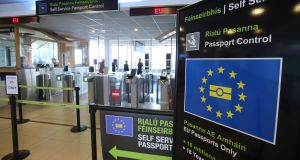 New electronic passport readers will be in place at both terminals in Dublin Airport from Tuesday in an attempt to significantly reduce delays at immigration control. File photograph: Niall Carson/PA Wire.

New electronic passport readers will be in place at both terminals in Dublin Airport from Tuesday in an attempt to significantly reduce delays at immigration control.

However, as airport infrastructure continues to make it impossible to segregate passengers arriving from domestic airports and the Common Travel Area (CTA) from those flying in from the rest of the world, passenger congestion looks set to remain a feature of the airport at peak times.

Delays of up to an hour were reported over the June bank holiday weekend by passengers making their way through the airport arrivals halls, with some suggesting on social media that the cause of the delays were reduced staffing levels at immigration booths.

The Department of Justice insisted that “all immigration booths were manned during the congestion period”. However, a spokesman conceded that on occasion an immigration officer was required “to step out of the booth to conduct further investigations with primarily non-EU passengers”.

A third of all the passengers who come into Dublin Airport each year are from the UK and under the rules governing the CTA – made up of the UK, the Channel Islands, the Isle of Man and Ireland – they should be able to travel freely without showing any documentation.

The department has blamed the infrastructure of Irish airports for the issue which means “passengers arriving on flights from internal and external origin are not segregated”. A spokesman said it was a matter for the airport authorities which come under the remit of the Department of Transport rather than his department.

A DAA spokesman, however, said that “under Irish rules, the authorities want to be able to confirm that a specific passenger is entitled to avail of the CTA and to do so their documentation is checked”.

He added that the DAA has not been requested to segregate CTA passengers. “Such a change in the system, which has applied for many years, would require a major retrofit to the entire airside arrivals area at a very significant cost.”

The DAA spokesman cast doubt on whether this cost would be supported by Dublin Airport’s airline customers “with whom we consult on all significant capital spending” or by the Commission for Aviation Regulation (CAR) “to which we must submit our capital plans for approval”.

He confirmed that thousands of domestic passengers have to go through immigration channels every week but played down the impact the anomaly has on the time it take people to exit the airport after landing.

“We understand the frustration that domestic passengers have in relation to passport control, and we have looked at several options to allow them to bypass immigration in a controlled way,” he said.

“But unfortunately none of these have thus far been feasible.”

From Tuesday, e-Gates in both terminals will be open from 8am. On one day last week a record 13,314 people passed through the e-Gates in Dublin Airport.