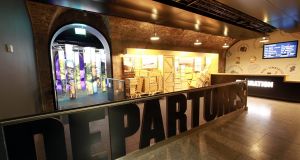 The three-year-old project in Dublin’s docklands, picked up the award on Saturday, winning over Buckingham Palace, the Eiffel Tower and the Colosseum in Rome.

Welcoming the award, EPIC founder Neville Isdell said: “I have always believed that the story of Irish people around the world was worth telling, and so, I founded EPIC. When we opened in 2016, we had a vision to create a local museum that could connect globally. It’s very important that we honour the Irish diaspora abroad and recognise the vital contributions and monumental impact Irish people have made worldwide.” The interactive museum based in the CHQ building expects to welcome over 300,000 visitors this year.

The awards were announced in Maderia on Saturday night and are voted by tourism professionals and consumers worldwide.

Start them stirring, knife skills at four: how to teach kids to cook
9