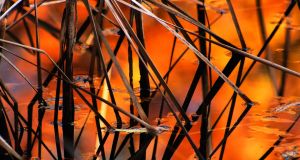 National Biodiversity Week, which ends this weekend is a celebration of Ireland’s native flowers, trees, insects, animals and birds.

The term first originated in the 1960s as biological diversity and was reduced to biodiversity in the 1980s. And, in this 25th anniversary of the United Nations Convention of Biological Diversity, the Irish Environmental Network highlights walks, talks and workshops all over Ireland this week (see biodiversityweek.ie and panel for some suggestions).

However, it would be naïve not to acknowledge the ongoing destruction of biodiversity by humans in what is known as the Holocene or Anthropocene extinction – the fifth massive extinction of species since life on earth began.

“There is more awareness of biodiversity now but there has been a great reduction in biodiversity in Ireland due to intensification of agriculture,” says Ni Lamhna.

Specifically, she refers to how most pastureland is now rye grass compared to meadow grass which had up to 60 species of wild grasses and wildflowers. “Cutting silage instead of hay also has an enormous affect on pollinators, other insects, birds and animals like hares.”

She is, however, encouraged by the efforts by Tidy Towns groups to plant native trees and let wildflowers grow – all of which encourages biodiversity.

Ni Lamhna joined other environmentalists to celebrate the range of habitats, insects, birds and animals on the conserved Abbeyleix Bog in Co Laois on Saturday, May 19th. Ecologist and Eco Eye presenter Anja Murray was also there.

“Biodiversity Week is a lovely event which celebrates natural habitats and encourages people to open their eyes and get out in nature. Abbeyleix Bog, for example is teeming with wildlife from carnivorous plants to rare flowers and birds,” says Murray.

Over 550 species have been recorded on this community-led project since it was leased from Bord Na Mona in 2009.

Like Ni Lamhna, Murray is keen to point out that Ireland has lost much of its species-rich grasslands and wild woodlands.

“I think there was a backlash against nature when the Special Areas of Conservation and Special Protection Areas were designated in Ireland. Part of this backlash resulted in reduced funding to organisations like the National Parks and Wildlife Service and the Heritage Council,” says Murray.

She says it’s important to be positive about nature now. “It’s not a battle. The natural world should be protected for all our benefit, not just because of scientists and bureaucrats. There is an inter-dependency between us and the natural world. My main hope for the future is in community and volunteer-led initiatives like the Abbeyleix Bog project.”

Chris Uys is one of the volunteers on Abbeyleix Bog. “It is a multi-disciplinary collaborative project. We have the National Parks and Wildlife Service, the Irish Peatland Conservation Council and Laois County Council on our advisory group, and we work with environmental non-governmental organisations including Groundwork, the Irish Wildlife Trust, Birdwatch Ireland, Bat Conservation Ireland as well as researchers and citizen scientists for surveys for the National Biodiversity Data Centre.”

But, alongside all this conservation work is public engagement. Abbeyleix Bog is an open access amenity with looped walks and boardwalks. “More and more people are coming here to walk,and when they are here they start asking questions about butterflies and bees. The solution for our future wellbeing is looking after the environment for everyone,” says Uys.

Events in National Biodiversity Week on Saturday/Sunday, May 26th-27th

Blossom Week at the Irish Seedsavers’ Association, Cappaore, Scarriff, Co Clare: enjoy free entry and free tours of gardens and orchards from 9.30am-4.30pm on Saturday and Sunday at this centre whose focus is on protecting Ireland’s food biodiversity and heritage crops. If you have plants aplenty go along to the annual plant share on Sunday from noon-4pm, where you can share plants, seeds, seedlings. Horticulturist Richard O’Gorman will speak about the therapeutic benefits of gardening. irishseedsavers.ie

Go Wild in Galway: indoor and outdoor events across the city celebrate biodiversity. Drop into the Orbsen Building at NUIG on Saturday and An Taibhdhearc Theatre, Middle Street, Galway, on Sunday to meet experts, join workshops and find out about ongoing conservation work.

Explore the biodiversity of Clarisford Park, Killaloe, Co Clare: a chance to identify trees and flowering plants in the park, look out for signs of mammals, go on a bug hunt, and see life under water on Saturday from 11am-2pm.

Dublin City Green Trails: join a two-hour guided tour of Dublin city to discover the plant and animal species in semi-natural habitats in Dublin city centre. The walks, which start from St Stephen’s Green on Saturday at noon and 6pm, will explore grassland, woodland, freshwater and parkland areas of St Stephen’s Green, the Iveagh Gardens and Merrion Square Park.

The butterflies of Lullymore West at the Bog of Allen Nature Centre: Find out how habitat management has helped conserve endangered butterfly species such as Marsh Fritillary. The talk at noon on Sunday will be followed by a guided butterfly walk to Lullymore West bog.

Nature walk on An Taisce’s Burren land: Meet at the Corofin Burren Centre, Kilfenora, Co Clare, to take a short bus ride to the Burren National Park, stopping off at different habitats en route on Sunday at 2pm

Outdoor workshop in Bull Island, Dublin: Learn how to identify the seashells in Dublin Bay on Sunday at 4pm at this workshop led by Karin Dubsky.