Feasting our way through history on a foodie tour of Mauritius

From street snacks to high-end hotel cuisine, there’s much to try, and much to love 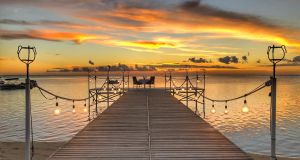 Having prised myself from the caramel-cobalt beach that lines the west coast of Mauritius, I’m at chef Rakesh’s cooking class in the kitchen garden of Maradiva Hotels. Surrounded by exotic ingredients like hibiscus, lychee, tulsi, fig and papaya, he reaches across for what I first think is a pole, then a chair leg. But after peeling away the rough outside layers, it begins to resemble a leek. It slices like one too. He tosses it in lemon, parsley, coriander, et voila: a palm heart salad, nicknamed “the salad of the millionaire” in Mauritius.

“It’s an expensive ingredient: one piece in a supermarket is around €20,” says Rakesh. “Locals have it only at special occasions like Easter or Christmas, and hotel resorts buy most of the stock. We’re growing the right palm trees here at the moment, but it takes three or four years before we can harvest them.”

It’s a privilege to try it fresh. Grown sustainably in Mauritius, it gives a subtle, artichoke-style texture to the salad we feast on at the end of the cookery course, a meal that also includes a Mauritian chicken curry, made with freshly ground spices and marinated chicken, and a fresh fruit kebab for dessert.

This divine meal is only one style of the many that make up Mauritian cuisine. A small tropical island off the coast of Madagascar, its eventful past has led to a melting pot of culture and cuisine, complemented by an impressive array of local produce: 30 per cent of its food is cultivated domestically; not bad for a small island that almost has as many annual visitors (1 million) as residents (1.3 million). The full breadth of clientele – from those grabbing a snack at a street food van, to honeymooners expecting the meal of a lifetime­– add another dimension to the delicious diversity.

In its 500-year modern history, Mauritius was colonised by the Dutch, French and the British, who were joined by economic or forced migrants from Africa, India, Malaysia and China. Now a republic, Mauritius is a glorious example of how these groups can co-exist without friction. British in some aspects (they drive on the left-hand side of the road), French in others (the language), but arriving at a Creole conclusion, an exploration around the hilly southern island reveals it’s a usual occurrence to see a church, mosque and Hindu temple on the same road.

A gastronomic equivalent, you’ll also the sign “Roti chaud” atop a small stall. It’s comical for me to see, having grown up in an Indian household in the 1980s where roti might as well have been on a different planet to the English-speaking realm, never mind the French-speaking one.

Here they serve one of the most popular fast foods: flatbread filled with grois pois (butter bean curry) and rougaille, a tomato sauce, rolled up. Another variation is dholl puri, where soft fried bread is laden with chickpea curry and a piquant tomato chutney that only the brave should try.

My first dholl puri is at the bustling food market in Curepipe, a small southerly town satisfyingly pronounced “kew-peep”. As in the capital of Port Louis, the food market is found alongside stalls selling clothes, jewellery and knick-knacks, punctuated by fresh fruit stands. In the first throes of summer, though it’s already a sticky 30C, mango and pineapple are in season, ready to be bagged up with a fiery red chilli and salt topping. But I venture out to the food vans; there’s one selling noodles, one selling drinks, and an abnormally busy one selling dholl puri. And if I see a queue, I join it.

As it shuffles forwards, I observe those before me. Most are going for a version where two filled puris are rolled together to make one megawrap. So when it’s my turn, unable to speak Creole, I point. Unfortunately I get a single filled puri instead, but it costs me 15Rs (40c) and provides an excuse to have my second course at the stall next door.

They serve samosas, the ubiquitous gateaux piment, smaller fried lentil and green chilli balls and bhajis with vegetable fillings. I order one of each. The first bite of the bhaji is like compressing a cloud: light and delicious, the thin slice of aubergine in the middle is clearly an excuse for the thick, airy batter around it. Altogether, it’s well worth 80c.

As tasty as the street food is, a large proportion of Mauritius’s visitors are couples on a lavish holiday of a lifetime, and in the market for a meal to match. For this, they gravitate to the top hotels that add world-class finesse to Mauritius’s cuisine.

The circumference of the island is busy with high-end hotels: there are 34 five-stars, seven of which are “five-star luxury”. Maradiva is one, partly because of the plush accommodation of 65 private pool villas, partly because of its cuisine.

Like most large hotels, there’s a choice of restaurants. There’s a traditional Indian, a teppanyaki restaurant to add a little theatre, and Coast2Coast, an international restaurant with sunset views over the sea, and better still, can facilitate dinner on the beach. Underneath the softly lit Raj tent, with sand in your toes and the lapping of waves in the air, it’s a romantic setting to enjoy a glass of wine and dishes like burrata and tomato salad, or Mauritian bibimbap: a local twist on the Korean rice bowl, with steamed chicken and noodles.

The next day, I travel to the aptly named Blue Bay in the southeast, and it’s another glorious day in paradise. A few fluffy clouds in the sky, mild breeze, perfect heat. Idly peering over my book towards the shallow waters of the bay, I spot a couple of guys waist-deep in the azure-tinged waters, snorkelling equipment in one hand, fishing rod in the other. They’re out to catch their Sunday dinner.

Come lunchtime, I take the 10-minute drive to Mahébourg, the port where the French famously won a rare victory against the British in 1810, though the Brits took control of Mauritius by the end of the year.

All but closed on a Sunday, its wide promenade is empty except for a few leisurely strollers and a couple of people out with fishing rods. I follow the waterfront around, take a narrow back street and find Mahébourg’s Fish Landing Port, where the fishermen arrive with their haul – red snapper, seabream, tuna, capitaine and grouper.

Opposite this, at Le Vielle Rouge, I find Barwayze Purbhoo, a passionate restaurateur whose father was a fisherman. Six years ago, he bought this house and converted it to what’s become the most famous seafood restaurant of the southeast.

“Being located opposite the fisherman’s port and buying from them directly means I can get my pick of the day’s haul,” he says with pride.

There’s lobster curry, calamari in a sweet and sour sauce, seafood kebab, fish’n’chips, and fish braised in coconut milk. The specialty is Indian-style fish cooked in a banana leaf, served with rice and salads for Rs375 (€9.50).

“The trick is to bake it at exactly the right temperature for about five minutes,” he explains. “Too high and it will burn the leaf. Too low and the fish won’t cook through.”

Today’s fish is capitaine and it’s baked beautifully, with the strong flavours of the sauce adding strength to the light, flaky chunks. Fusion cooking at its most authentic.

With Mauritian cuisine ready to be sampled by travellers who explore this remarkable island, pity those who spend all their holiday on the beach. But not that much.

Shilpa Ganatra was a guest of Maradiva Villas Resort & Spa. Villas with private pools start from €587.50 at low season and €680 at high season (half-board). See maradiva.com.

Indirect flights from Dublin, from airlines like Air Mauritius, Swiss, Turkish Airlines and Lufthansa, begin at €526.

Fire your internal drill sergeant, it’s time to be kind to yourself
10