‘When customers come here for dinner, they don’t want to think about Covid’ 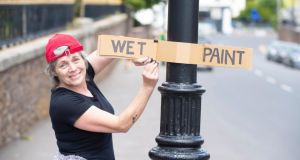 Gillian Westman of Dunmore East Tidy Towns repainting the lamp posts: “It’s a beautiful place. We can’t keep it all to ourselves.” Photograph: Patrick Browne

Dunmore East is beginning to wake up after the longest winter in anyone’s memory. With the countywide travel restrictions lifted, parking is suddenly at a premium again in the Co Waterford seaside village. And for once, nobody is complaining about it.

A small, socially distant lunchtime crowd has gathered in the sun outside the Lemon Tree restaurant. The restaurant switched to takeaway only in March, and stayed open throughout the lockdown, serving a full daytime menu through a newly installed hatch. It’s been such a success that owner Joan Boland hasn’t yet decided whether to reopen the dining room. Like most people here, she is glad to see life coming back to the village. “There are cars everywhere. It’s a nice feeling.”

Gillian Westman is giving the lampposts outside the Haven Hotel a fresh coat of paint. “I’m doing them in sixes,” she says. A member of the Tidy Towns committee, her pleasure at seeing signs of summer is tinged with nervousness. At 132.6 cases per 100,000 people, Waterford has the lowest incidence of Covid-19 of anywhere in the country. “Our numbers have been right down all the way through. Everybody is a bit anxious” that might change when the full travel restrictions are lifted, Westman says.

But, she adds, “it’s a beautiful place. We can’t keep it all to ourselves.”

There is an awareness, too, that the local economy relies on those visitors. With a summertime population that swells from 2,000 to between 8,000 and 12,000, “tourism is the only game in town”, says restauranteur Adriano Cavaliere.

At the socially distant team meeting upstairs in Azzurro, he and his co-owner brother Dario give floor staff an idea of what to expect when the restaurant reopens on June 29th. “When customers come here for dinner, they don’t want to think about Covid,” Adriano says. So there won’t be large signage all over the restaurant beyond what is legally required.

A staff member asks about masks and gloves. Masks will be provided to floor staff, Dario says. But, Adriano adds, “the thing to remember is it’s not mandatory. Let’s say you, as a punter, go into a restaurant and everybody is wearing masks and visors, and they all look like Darth Vader, you’re not going to feel comfortable. Hand hygiene is the number one way to stop the spread of Covid.” Staff will be required to complete a hygiene course before they come back to work, he says.

Dario asks who would like to wear a mask. Nobody raises their hand.

Back downstairs, Adriano has laid out tables 1.5 metres apart. The business won’t be viable if the two-metre rule isn’t relaxed, he says. “If it stays at two metres, I probably wouldn’t bother opening the doors. Normally, I’d have 16-18 people in this room. At two metres, I’m looking at six to eight. It’s just not practicable. You can’t do it.”

The three months of summer account for nearly 60 per cent of the restaurant’s total business. “Right now, just with takeaway, I’m making enough money to pay the suppliers and keep the lights on,” Adriano says. He’d like to see the Government give a VAT holiday to help businesses like his survive.

The season is even shorter for Karen Harris, who owns the Dunmore East Adventure Centre. The centre’s aqua park, which should already be open for school tours and birthday parties, is closed until June 29th. The current regulations mean operating at half-capacity with increased hygiene measures and temperature checks, but Harris won’t increase prices. “As soon as we put out there that we were reopening, the bookings flew in. Everybody is mad to go,” she says.

The Breakwater gift shop opened on Monday morning to a steady stream of customers, many of whom were buying multiple baby and birthday gifts. It’s a “bittersweet day”, says owner Emma Loftus, from behind her new perspex screen. She’s delighted to be back, but her second shop near the Greenway won’t be reopening. “It could have been a lot worse. I could have lost everything.” In the breaks between serving customers, she is philosophical. “You can’t run a business with your heart. It has to be with your head.”

Outside the Strand Hotel, staff members are repainting the blue tables and benches ahead of the planned reopening on June 29th. It can’t come soon enough for owners Edwina Foyle and Louise Foyle-Fezer. “We’ve now had four sunny bank holidays, and we’ve missed out on all of them. The whole village has missed out,” says Foyle.

Most people are connected to the tourism industry to some degree, adds Foyle. “We would employ 50 people here in summer and 20 in winter. We really are so dependent on the summer months.”

Down by the beach, Angela Kearns is taking advantage of the easing of countywide travel restrictions. Having spent the lockdown in Dunmore, she and her daughter Arlene and their dog are heading for a hike up to Coumshingaun Lake in the Comeragh mountains. The peace has been nice, but “it’s good to see a bit of normality return to the village”.