Sardines packed into a syringe: The Dart at peak time

I’m relieved the rail strike is suspended. Until I get to the station and face the rush-hour Dart 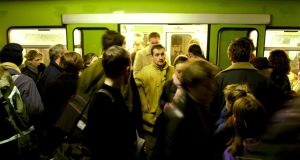 The doors open, and a sea of bodies almost spills out onto the platform. Photograph: Frank Miller

Today’s planned rail strike is suspended, and I travelled to work by Dart this morning. That’s good news, isn’t it?

So today, unlike last Tuesday, it didn’t take nearly three times as long as usual to get to work (late), and my son’s fingers won’t be sore with the cold when he finally gets home from school, after waiting for an hour for a bus, as several trundle past him, full.

(It’s only a suspension of action, and given the track record of management and unions thus far, don’t hold your breath that they have it in them to sustain the service, and it could fall apart. Both sides of the argument have a point, but most of us are not that interested. Just get on with it and get us where we want to go, efficiently and comfortably. And that last is the point.)

So why does the prospect of getting on the Dart give me a sinking feeling each morning when I wake up?

It’s 8.20am, peak morning commuting time at a suburban station half an hour from Dublin city centre. The platform is full, as there hasn’t been a scheduled Dart for over 15 minutes.

The train rolls languorously to the platform and I glance down its length. It’s four carriages long. Again. At peak time. The doors open, and a sea of bodies almost spills out onto the platform. The seats are full, the aisles are full, the door areas where they removed seats some years ago to create more standing room, are full.

How is anyone going to squeeze in there? It’s like sardines packed into a syringe. Maybe instead of improving the service Irish Rail will instead employ train crushers with white gloves, to shove more passengers onto the train, Toyko-style.

Right. Take a deep breath, gird your loins, sharpen your nerve, and just go for it. The waiting passengers slowly worm their way on board, squeezing their bodies through imperceptible gaps in those standing, to try and establish a tiny bit of space.

So you stand there, uncomfortably close to strangers; an arm reaching here over your shoulder to grasp a rail, a stranger’s face breathing into yours, a bag on someone else’s back jostling into your side.

Often there is nothing accessible to hold onto as the train lurches, and I have perfected the art of standing steady without a handgrip: feet as far apart as the crowds allow, bend the knees slightly as you feel a lurch coming, mentally grip the floor with your feet (I think that bit is a psychological help only).

Then gently release and straighten knees as the lurch ends. The bodies pressed close around you sometimes help prevent a fall. It may be safe, but it doesn’t feel safe.

In these circumstances you can’t put your bag down. You can’t manoeuvre to take a coat off when it is hot because of the crowds (and there’s nowhere to put it anyway). A cough – yours or someone else’s – is a source of horror. Reading a newspaper or a book is impossible; reading on a phone is a strain; there are coverage blackspots, and heavy phone use, so listening to the radio or music can be unsatisfactory.

People are often friendly, and occasionally some chat breaks out.

The windows fog up so you can’t see the station names, even if you can spy a gap between the crowds. Other people’s leaking headphones crackle inches from your ear. So you spend your time staring at the flecks on the back of the brown duffelcoat back of the stranger 6cm in front of you, feeling the warm breath of the person behind you on your neck, as you brace yourself against the lurches, and keep an eye out for a fissure in the crowds which might allow you to move down the carriage for a centimetre more personal space.

This is the comfort of commuter rail travel, peak time, in the capital city of a first-world country. The Luas is lovely but it too is overcrowded at peak time; drivers at peak time suggest people move up the car, or open the windows so passengers don’t faint.

Bus travel is crowded and uncomfortable at rush hour too; but bus drivers don’t allow beyond a certain number to stand onboard – this limits the overcrowding, but means buses regularly fly past waiting passengers, full.

I’ve never seen anyone monitoring the conditions at rush hour, or stop passengers get on a Dart due to safety concerns, no matter how full a train is. According to Irish Rail, a carriage is full when no one else can get on the train. (And relief; they have no plans for Asian-style crush loading.)

Today there were eight carriages on the usual morning Dart. Sometimes there are four, sometimes eight, and I can’t work out a pattern, or whether it’s completely random. Eight carriages means that when the doors open there can be some floor space visible. And you can hold on to a bar. The brown duffelcoat is a distance from my face.

We expect city commuter trains to involve many passengers standing, and a degree of crowding, but this seems excessive, and apparently every day.

According to the RailUsersIreland website, “Europe wide there is no legislation or standard to be found which define limits or legal restrictions [on overcrowding]. However it is clear the overcrowding problem in Dublin is the worst to be found in Europe. We know of nowhere else where it is routine to operate virtually all peak hour trains at the manufacturers’ capacity limits. For comparison, the busiest train in the UK is 12 coaches in length and carries 1,300 passengers, and it is routine to pack 1,240 people into a 8 coach commuter train and up to 1,400 on a DART train in Dublin.”

The Dart service is quite good, if slow and infrequent, outside commuter rush hour. But during the several hours of daily peak travel, Dublin Area Rapid Transit (I’d like to see what they reckon regular is, if this is rapid) is horrible.

Even more galling is that for this unpleasant service, we are paying through the nose. Dublin Bus, Luas and Dart fares compare very badly with public transport ticket prices in most European and US cities (barring the UK where they’ve made a pig’s ear of public transport generally), where the norm is to have a have a faster, more frequent, less crowded, integrated, way cheaper public transport service than the mess we are overcharged for. (And fares are going up on December 1st.)

Some 19 million people took a Dart journey in 2016 (up 11 per cent on last year), with roughly a third of those during the morning commute and a third in the evening rush. (One day a year, there is a snapshot survey of Dart travel patterns; this year it will be on Thursday 16th, so watch out for people counting in stations.)

Search online for “Dart overcrowding” and a slew of online commentary comes up, going back years. It’s not a new phenomenon. One of the functions of management is long term planning. So it’s a surprise to learn that there isn’t an order in for more carriages to catch up with demand.

Irish Rail communications director Barry Kenny says there are 154 Dart carriages currently in the fleet (76 of those are original carriages from 1984). Some were out of service in the downturn and are being brought back to service gradually, leading up to the welcome promised 10-minute frequency between Darts at peak time.

When they extend the Dart to Maynooth and Balbriggan, they will order many more carriages.

Industrial relations are being “finalised”, and Irish Rail expects the more frequent Darts to run in the first quarter of 2018. This will create 20 per cent extra passenger capacity, with the same number of trains running more frequently.

The unknown is whether the overcrowding will still be as bad, as the service pants to keep up with increasing demand.

And in the meantime, tomorrow morning, it’ll be: take a deep breath, grin and bear it. Again.

‘I couldn’t get a job in Ireland. Was it because I’m a different race?’
5