Trains, brains and all of the feels: The travel trends of the future

Emotion-recognition technology, an increase in rail travel and people-carrying drones will play a part in your holidays 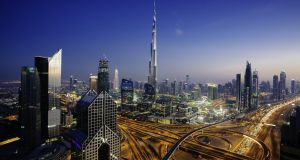 Transport networks in Dubai are dabbling with drones to move people around.

Fancy booking your next holiday based on the emotions you'd like to feel while you're away? What about being delivered to your destination by drone? According to trend predictors Euromonitor International, technology will completely change the way we travel in the future.

At the World Travel Market in London on Tuesday, research organisation Euromonitor International, launched its Global Travel Trends report predicting how we’ll be taking our holidays next year.

Technology is going to play an ever bigger part in our choices of holiday destinations. According to the report, it seems it is not a long way away until we book our holidays by reading brain activity. Computer headsets from Emotiv will record brain activity, registering different emotional states deciphered from gestures and sensors, when looking at destinations. Your reactions will help determine where you might travel.

Travel website Expedia is already testing emotive technology and has opened a number of Usability Labs to analyse people’s use of their website. Sensors are attached to subject’s faces to give an insight into their emotions.

In future, when making hotel bookings, it could all be done by mood. Travelsify is a hotel booking platform that uses 34 attributes that allows users to book a hotel based on mood or emotional state. Travelsify Hotel DNA identified attributes such as cosy, spacious, zen, classic, vintage, nightlife, luxury, design, gourmet etc. They intend to narrow the gap between expectation and experience.

Paying for travel can be a reason to restrict your travels, but if there was a way to pay by instalments, more people would travel, the report found. Flyto, a two-year-old startup, has developed software that integrates with a travel provider’s website and offers customers a way to pay for travel in instalments while Flyto pays the provider upfront. Flyto is backed by Mastercard and Telefonica.

Rail is expected to become more of a transport solution in the near future. Britain is soon to have HS2 high-speed service from London to the midlands, with London to Birmingham in 47 minutes – compared to one hour, 52 minutes at the moment – and Hyperloop is already planned for Dubai.

Dubai was identified as one of the fastest growing destinations , as its tourism industry is booming and it seems insulated from the turmoil in the region. Dubai aims to welcome 20 million visitors per year by 2020, up from 14.9 million in 2016. Dubai is also using technology to improve visitors’ expereiences: The city is testing passenger drone runs over the Burj al Arab. It has also signed a deal with Hyperloo One to launch a hyperloop train to run from Dubai City to Abu Dhabi with speeds of 500mph.

While the US is looking at ways of restricting visitors, Africa is looking to do the reverse: opening borders and enhancing collaboration with the African Union’s plans towards seamless borders and, in some cases, abolishing visa restrictions.

The report also ranked the world’s top cities in terms of international arrivals. The top three were Hong Kong with 26.55 million visitors followed by Bangkok with 21.25 million, which has overtaken London with 19.19 million in 2016. Asian cities dominate the global destination rankings thanks to the huge rise of Chinese outbound tourism and six of the top cities were in Asia, one in North America, two in Europe and one in the Middle East.

ABout 51,500 travel professionals from 182 countries visited the show in London on from Monday to Wednesday, November 6th to 8th.

A total of 70 Irish tourism enterprises are represented at the show.