The best ski deals this winter

Whether you’re a first-timer or a seasoned pro, heading as a family or with a gang of friends, here are some of the best packages out there 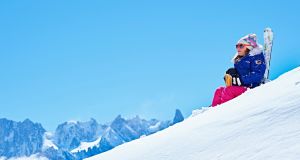 Resorts such as Aime La Plagne Club Med in France offers kids’ clubs and activities such as sledding to keep little ones amused. Photograph: Getty Images

St Anton is famed for its snow conditions, off-piste, night skiing and its après scene. Skiing here can be challenging, especially in the Galzig area, but your pass gives access to a 305km of varied terrain in the Ski Arlberg area. Depart January 6th for seven nights at Chalet Schlosshof, on a catered basis (breakfast, afternoon tea, evening meal with wine), with return flights from Dublin and transfers from €915pps. A ski bus stops outside the chalet that sleeps 18-22 people. crystalski.ie; 01 433 1080.

Zermatt ticks all the group travel boxes: scenery with Matterhorn views; impressive ski area crossing over the Swiss-Italian border; shops, museums, and galleries – plenty to keep fussy friends happy. Stay in the four-star Hotel Alpenhof for direct access to the Sunnegga cable car and an indoor pool. Departing Dublin, B&B costs from €1,344pps. The three-star Elite, also close to the train station and cable car, is from €824pps. Connecting flights are available from Cork. abbeytravel.ie; 01 8047100.

If you want to make friends, Highlife offers a solo package – waiving the single supplement – to the eight-bedroom Chalet Etienne in Méribel. The trip starts with a group drinks reception in the chalet – the perfect way to get to know your fellow travellers. At the chalet, your chef and host will prepare afternoon treats, three-course evening meals with a selection of wines, rounded off with digestifs and a cheese board in front of the log fire. And you don’t even have to do the washing up. Prices start from €765pp and include minibus transfers to and from the chalet, which will have facilities including a hot tub, meals, wines, bar and ski discovery tours. highlife.ie; 01 6771100.

Known as Little Siberia among the Italians, La Thuile’s east-facing slopes have a good snow record and long, wide runs best suited for beginners. Beginners can start on the two easy slopes, served by a travelator carpet lift at village level or on higher runs at Les Suches. Depart January 7th from Dublin to Planibel Apartments for seven nights, self-catering basis, from €379pps based on four people sharing. crystalski.ie; 01 433 1080.

Mont Blanc, the highest mountain in the Alps, provides a stunning backdrop to the Chamonix Valley, the “ski capital of the world”. The town of Chamonix is much more than a resort town though, perfect for a non-skier, with weekly markets, restaurants, shopping and leisure activities. The valley – connected by local ski buses – offers slopes for every level from wide, easy slopes at Les Houches to Grand Montets at 3,300m. Don’t miss a trip to the summit of Aiguille du Midi even if you aren’t skiing. If you want to keep control, arrange your own trip. There are daily flights to Geneva, bus transfers from the airport, and a range of accommodation offerings on Airbnb. “New chalet Mont Blanc” is a stylish detached mazot on Avenue Ravanel le Rouge (from €70 per night) suitable for two to four people, but not small children. If you are renting a car, do it from the French side of the airport for the best value.

Europe’s highest resort, Val Thorens seems to go on forever as it forms part of the famous Three Valleys, offering more than 600km of piste – from powder snow on the glaciers of Peclet and Chavière to mogul-bashing on the long, steep Cîme de Caron black run and the Couloirs of Courchevel. At this height, go for luxury at the five-star Hotel Koh-l Nor, which costs €1,685pps for seven nights, half-board, departing Dublin on March 17th. If you can’t wait until St Patrick’s Day, depart January 13th to the Temps d’Soleil self-catering apartments from €509pps. crystalski.ie; 01 433 1080.

Avoriaz, in the Haute Savoie region of the French Alps, was one of the original snowboarding resorts in France. There are purpose-built snow parks and a superpipe, the most famous of which is the Stash, which is on a wooded mountainside and brings together elements of all-mountain riding and freestyling. Expert boarders tend to head to the park at Arare. Avoriaz is located about 800m above Morzine and is part of the Portes du Soleil region. Seven nights in Chalet Jean France located on the piste, including meals, from £468 (€532), excluding flights to Geneva. inghams.co.uk.

One of the world’s premier ski resorts, Val d’Isère combines some of France’s best skiing and snowboarding conditions with an exciting après scene. The resort links to Tignes to form the Espace Killy, one of the most varied ski areas in Europe, with 90 lifts. Depart January 13th for seven nights at Jardins studio apartments on a self-catering basis, from €485pps based on four sharing, including return flights from Dublin. There is a buy-one-ski-pass, get-one-free offer. crystalski.ie; 01 433 1080.

Kitzbühel hosts the Hahnenkamm, the scariest downhill race on the World Cup circuit. But beyond that one weekend in January, the skiing around this medieval town in the heart of the Tirol is best suited to intermediate skiers or boarders. Depart February 3rd for seven nights in the five-star Hotel Schloss, including breakfast and evening meal, and return flights from Dublin, Cork or Belfast, for €1,399pps.topflight.ie; 01 240 1700.

Best on a budget

Better call Söll for budget skiing. This Austrian resort is one of the liveliest resorts in the SkiWelt area and offers great value for money in a traditional village atmosphere. Seven nights B&B in the two-star Pension Niedermühlbichler starts at €399pps, including return flights from Dublin and transfers. directski.com; 01 254 6300.

Its duty-free status means Andorra is a top destination for skiers on a budget. Blue and red runs dominate the resort of Pas de la Casa. The Manzano Apartments – clean, spacious and simply furnished – are a walk from the après-ski action. Depart January 14th for seven nights self-catering from €405pps, based on four people sharing. Upgrades to B&B are available. crystalski.ie; 01 433 1080.

Camping might seem like an extreme approach to budget skiing, but Camping Flims has heated snow pods that are a five-minute shuttle ride from the main ski lift. Pillows and sheets are included, but not towels or sleeping bags. Laax is very snowboarder-friendly with its superpipe and some of the best snow parks in Europe. Nightly rates start at €64 for a two-person pod and €102 for a four-person pod. The campsite is two hours by shuttle bus from Zurich (from €60 each way). camping-flims.ch.

Calistoga is the latest chalet to join the stable of Hip Hideouts stable, the luxury Val d’Isère specialist. The chalet is in the quiet Le Crêt quartier on the edge of the village with incredible sunset views. The sitting room has double-height ceilings, large windows and rich fabrics. Five bedrooms, each with its own individually-designed bathroom, sleep 10 people. There’s also an eight-metre long pool. From £12,500 (€14,195) for the entire chalet, excluding travel. hiphideouts.com.

Nothing says luxury like your own helipad and five-star chalet with private spa, cinema and gourmet food. And if you are spending this much, adding flights to Canada probably isn’t a big deal. Bighorn Lodge sits in the backwoods of British Columbia, at the base of the Revelstoke lifts. There are eight guest suites and a spa area with a pool, gym, sauna, massage rooms and an outdoor hot tub. Expect top-class service at a price of $65,000 (€43,425) for up to 16 people, excluding air travel. Add heliskiing with Selkirk Tangiers from $14,480 (€9,600) for a day with a private helicopter for eight. Bighornrevelstoke. com.

Verbier’s exciting terrain and lively nightlife has long attracted a youthful, sporty clientele. For those ready to splurge, Chalet Pierre Avoi, in the Plan-Praz area, is available for exclusive use by a group of up to 14, plus two children. Choose from 10 complimentary house wines and two house Champagnes – Perrier Jouet Grand Brut and GH Mumm Cordon Rouge – throughout your stay. There is a panoramic terrace with fire pit, a dedicated room for massage and treatments, two sitting rooms, a sauna and an outdoor hot tub, and chefs to cater for any dietary requests. Prices start from £19,600 (€22,250), including a 24-hour driver service. Skiverbierexclusive. com

For family-friendly learning conditions, head for Aime La Plagne Club Med. Perfect your technique in the snow park, then head for the pistes on the north face of the Bellecôte. The resort has kids’ clubs and there are other activities such as sledding to keep little ones amused. Depart Dublin on January 7th for seven nights on an all-inclusive basis with full-board, open bar, transfers, ski pass and lessons from €1,339pp. clubmedsunway.ie.

This high mountain pass links the regions of Trentino and Lombardy. Most hotels are in easy reach of the lifts, which have few queues. There are races, illuminated runs, face painting and hot chocolate four times a week. The Grand Hotel Paradiso is situated just in front of the Serodine chairlift and the Paradiso gondola to the Presena glacier is across the road. The Crystal Pepi Penguin Nursery or Whizz Kids Club are based at the hotel. Depart Dublin on January 13th for seven nights, half-board from €909pps, €1,984 (2+1); €2,172 (2+2). crystalski.ie; 01 433 1080.

Thanks to friendly slopes, a traffic-free centre and plenty of non-ski activities, Zell am See is a great choice for families and intermediate skiers. For a Christmas break, depart Belfast on December 23rd, with transfers from Salzburg airport and accommodation at the three-star Pension Hochwimmer, from £489 (€550). Departing December 30th is £569 (€646). The same trips from Dublin cost from €649 and €779. skimcneill.com.