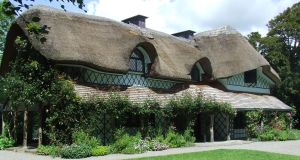 The closest setting to JRR Tolkien’s Shire this side of Middle-earth, Lord Cahir built the Swiss Cottage as a thatched rustic retreat in the early 19th century. Its intricate network of structural beams and quirky architecture bring it out of the chocolate box category. It’s a classic “cottage orné” designed by John Nash, whose credits include the Pavilion in Brighton and many cornerstones of London’s Regency era.
Open: April 6th-November 1st
Hours: 10am-6pm
Admission: €5 adults, €13 family (admission by guided tour only; no credit card facilities)
http://iti.ms/2o4eKyd/

Ever since it appeared in the closing scene of Star Wars: The Force Awakens, fans are lining up to take the 12km boat journey to this monastic island outpost. Described by Mark Hamill (Luke Skywalker) as “just indescribably beautiful”, the Unesco world heritage site makes visitors work for the island experience – 600 vertigo-inducing stone steps lead visitors to the monastery on one of the island’s twin peaks. With no rails, it is not for the fainthearted. Licensed ferries carry guests across to Skellig Michael from Portmagee Harbour.
Open: May 12th-October 2nd
Admission: Free, but ferry prebooking essential
http://iti.ms/2nB3ygc

It’s hard to imagine that sleepy Foynes was once the epicentre of the aviation world. The world’s only B314 flying boat replica is the museum’s most eye-catching display, set in the original Foynes Airport terminal building. A full-scale 3D hologram recreates the cold winter night in 1943 when Chef Joe Sheridan invented Irish coffee for passengers. The museum has a replica 1940s cinema and the airport’s role during the second World War is showcased. The Maritime Museum addresses Foyne’s pivotal location on the Shannon river.
Open: Mid-March to mid-November
Hours: 9.30am-5pm (6pm June-September)
Admission: €11 adults, €28 family
flyingboatmuseum.com

Quin Abbey’s 15th-century colonnaded cloister is the crowd-pleaser in the heart of Co Clare’s most idyllic countryside village, 10km from Ennis. John “Fireball” MacNamara, the hell-raising last chieftain of the McNamara clan, is interred in an ornate tomb in the Lady Chapel. Relatives of Thomas Blood, famous for stealing the crown jewels, lie in a vault beyond the cloister. The altar remains as it did in medieval times while the nearby charred remains of a 17th-century stucco crucifixion hangs on a wall. The monk’s dormitories remain intact from the time of Henry VIII’s dissolution of monasteries.
Open: Good Friday to end of October
Hours: 9am-6pm
Admission: Free

The O’Brien and Doolin Ferry lines compete with friendly banter for business on Doolin Pier. While the bulk of traffic heads across to the Aran Island, both operators offer a cruise 700 feet beneath the soaring cliff edge. It’s the only way to get a full on Harry Potter and the Half Blood Prince experience, when Harry and Dumbledore battled the Atlantic waves beneath the Cliffs of Moher in search of a Horcrux. The cruise sails close to a colossal puffin-coated sea stack under the watchful eye of the giant hag’s head.
Open: March until October 31st
Admission: €15 adults

The modest medieval tower house close to the entrance of Shannon Heritage’s wooded Living Past open-air museum of ancient Irish life was once the home of Daniel O’Connell’s unsung hero, honest Tom Steele. He was an eccentric who changed direction some years after he urged Pope Pius VII to convert to Protestantism by becoming a champion of Catholic emancipation. Steele’s initials are engraved on the wall of the tower. On a lake below, the park’s premier attraction is a detailed recreation of a cránnog, an artificial island dwelling from the Iron Age. Other highlights include a ring fort with an underground escape passage that doubles up as a refrigerator, pungent wild boars and the Brendan, the boat used by explorer Tim Severn to retrace and prove the possibility of St Brendan’s discovery of North America in the 7th century.
Open: Easter Saturday to mid-September
Hours: 10am- 5pm
Admission: €8.50 adults, €22.50 family
shannonheritage.com/Craggaunowen

The engraving onto the cut stone plaque on this 16th-century tower house states: “I, the poet William Yeats, with old mill boards and sea-green slates, and smithy work from the Gort forge, restored this tower for my wife George; and may these characters remain when all is ruin once again.” Yeats penned some of his finest work, from the Winding Stair and Other Poems to The Tower Poems, in the four-storey castle on the bend of a Co Galway road. it is now restored and open to visitors, who can discover the winding stair to the top floor or look out through the river-facing window in the chamber described by the Nobel Prize winner as the “pleasantest room I have yet seen”. Thoor Ballylee appeared in John Ford’s timeless The Quiet Man (1952).
Open: Every day until September 30th
Hours: 10am-6pm
Admission: €7
https://yeatsthoorballylee.org

Stretching back some 6,000 years, the Céide Fields are the most extensive Stone Age dwelling system in the world. The father and son Caulfields, a father and son team, discovered the oldest known network of megalithic tombs and stone walled fields preserved beneath north Mayo’s boglands. The site also takes advantage of its coastal location with a viewing deck over a 110m cliff edge.
Open: Every day from April 6th-November 1st
Hours: 10am-5pm (6pm June-September)
Admission: €5 adult, €13 family
http://iti.ms/2o4ozMQ

“The light of evening, Lissadell,
great windows open to the south,
two girls in silk kimonos, both
beautiful, one a gazelle”
That’s how Yeats described Lissadell House’s most famous residents, sisters Constance Markievicz and Eva Gore-Booth. Markievicz returned her silver spoon to join James Connolly’s Irish Citizen Army, where she became a 1916 Rising Leader, before taking a pioneering role in European politics. Gore-Booth was a suffragette activist. Current owners Constance Cassidy and Edward Walsh are restoring the house to its former glory on the shores of Sligo Bay. Visitors are given a guided tour of the house, stunning gardens and courtyard visitor’s centre with a 1916 Rebellion showcase.
Open: Until October 1st
Hours: 10am-6pm
Admission: €14 adults, €36 family
http://lissadellhouse.com

These tombs date back to 3000 BC, and some 30 stone passage graves are spread out over the summit of three hills. Cairn T is the largest tomb, with a corbelled roof and cross-shaped passages. Take note of the swirling Neolithic art etched into stone throughout the site. It’s a steep climb, so wear sensible shoes.
Open: Every day from May 25th-August 30th
Hours: 10am-6pm
Admission: Free
http://iti.ms/2nBuPPj