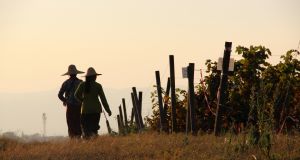 There’s a reason the world’s best wines are produced in France, California, and the handful of other sun-kissed regions we all know and love. It’s because they’re the only places with the kind of climate, soil and culture needed to grow great vines.

Tucked away in the hills of Myanmar’s central uplands, one man is out to change that view.

A veteran viticulturist from Germany’s Mosel Valley, Hans Leiendecker is on a mission to bring his decades of expertise to bear on Myanmar’s embryonic wine scene. A half-hour drive from the tourist hotspot of Inle Lake, the German runs the idyllic Aythaya Wine Resort, Myanmar’s first winery.

“Around 20,000 plants were brought from France, Italy and later Germany in the late 1990s to start up,” says Leiendecker from a table in the resort’s open-air restaurant overlooking the vineyard. On the table in front of us is a wine list describing the fruits of 20 years of hard work: three white wines (including a specialty late-harvest Sauvignon Blanc, priced at €2.50 a glass), two reds, a rosé and a grappino. Guests choose four of these for the wine-tasting experience and help is on hand from a team of English-speaking waiters trained for eight weeks in the finer details of wine pairing.

As we’re led on a fascinating tour of the winery and vineyard, we come across a small group of workers busily unloading and processing more than a tonne of Shiraz grapes in the heavy spring heat. “We tested around 60 different vine varieties,” Leiendecker explains. “Many failed.”

More than a dozen south-east Asian countries are now in the wine-making game. China, Myanmar’s giant neighbour to the north, is today the world’s fifth-largest consumer and 10th largest producer (despite production falling 20 per cent last year) of wine. All this means that, for the first time, a new generation of people in Asia are being exposed to a drink often associated with luxurious lifestyles and sophistication. Leiendecker is keen to get in on the act.

With views stretching out for miles across the valley, Aythaya is not only about grapes and vines. The vineyard is popular jaunt for newlyweds taking photos and local families who come for lunch at the Sunset WineGarden restaurant, which serves excellent Shan and European dishes.

For those thinking of staying locally, Aythaya has secluded guest rooms at its four-star Monte diVino Lodge just off the vineyard, ranked by TripAdvisor as the best accommodation in the area. Watching the sun set slowly across the valley below with a glass of red in hand as the hum of distant music wafts through the warm air is one of life’s true pleasures.

But there are few other places in the world where the science and skill of viticulture is tested as it is here in central Myanmar. Leiendecker has tried and failed with Pinot Noir, Chardonnay, Merlot and Riesling vines. “Pinot Noir, Merlot and Riesling all were planted, and they grew, but they didn’t produce grapes. Grape varieties that have a longer vegetation period are not useful in Myanmar because the daylight hours are too few,” he explains. It wouldn’t be so bad if the tests didn’t take seven to eight years to see through.

Leiendecker says that in Europe, the fruit setting of the buds for the next year’s harvest is done in June. “Fruit setting is also in June or July in Myanmar, but we have only 12 hours of daylight, and it’s during the rainy season.”

The maximum yield, he says, is about one-third the equivalent in Europe, and harvesting takes place in Myanmar’s driest months, February and March. “In Europe, half the year you have nothing to do in the vineyard, here it’s year-round work,” he says.

Traditional grape-growing regions normally have several sub-zero nights in winter. When temperatures fall to -2ºC, a hormone is activated that presses the shoot out of the bud later in spring. But because temperatures never fall that low in Myanmar, Leiendecker and his team have to buy the hormone and place it on each individual bud.

Then there’s the cost of producing quality wine in such a remote location. General production expenses are 2.5 times what producers face in Europe. Delivering wine vats by road from Yangon, Myanmar’s capital, is more costly than shipping them thousands of kilometres from South Africa, where there are bought, to Myanmar.

And yet Leiendecker doesn’t come across as a man overly troubled; it seems like he simply revels in the challenge. Years of trial and error have resulted in eventual success with Sauvignon Blanc, Shiraz and some Spanish varieties since they are conditioned for dry climates, as it is here for part of the year. German varieties, specifically Dornfelder, have produced the highest yields.

But is it any good? The excellent Aythaya red (80 per cent Shiraz, 10 per cent Dornfelder and 10 per cent Tempranillo), is the winery’s best seller and is well-balanced and aromatic, if not spectacular. (The 2017 Aythaya Shiraz Dornfelder vintage scores 3.2 out of 5 on Vinino.com, the ratings website.) Unfortunately, Myanmar wine is not yet available in Ireland because the Myanmar authorities have yet to apply to an EU list of “third wine-growing countries”. “We as a winery can’t do anything,” says Leiendecker.

Because the majority of his customers are not westerners, the international outcry over the Rohingya crisis that saw thousands killed and more than 700,000 people displaced from western Myanmar into Bangladesh in the autumn of 2017 has not hit him as hard as other tourist-centric industries in the region.

“We are not suffering because we are more dependent on locals and Asian tourists, and they are still coming,” says Leiendecker. He says a 30-minute feature broadcast on Japanese national TV a few years ago helped the winery reach an entirely new audience.

Sure enough, the restaurant’s clientele is overwhelmingly made up of locals – mostly middle-class families from nearby Taunggyi, Myanmar’s fifth-largest city. There’s also a group of Taiwanese tourists visiting Myanmar on a photography trip who’ve stopped by for drinks and dinner.

With just two wineries (the second, Red Mountain Estate is a 40-minute drive from Aythaya) in a country of more than 53 million people, the potential market for wine is huge. And with a breakneck modernisation drive taking hold in Myanmar since its return to the international fold in 2011, Burmese vintners who’ve earned their stripes in Australia or New Zealand are returning home to work in the beverage industry in increasing numbers. Stylish new wine bars in Myanmar’s capital, Yangon, run by savvy local entrepreneurs are introducing local connoisseurs to foreign wines for the first time.

Still, that doesn’t mean Myanmar is an easy place to start up a business in wine. Several other attempts at establishing vineyards have failed and the cost of delivering quality equipment from overseas is increasing all the time. For a young generation of Burmese looking to experience the world in new ways, local wines can come across as less appealing than the European and Californian brands on offer in Yangon. In fact, several of the capital’s well-stocked wine bars (Marco’s Cellar, for example, boasts more than 100 wines) say they don’t stock local wines because they’re too costly. Go figure.

For his part, Leiendecker knows the resort can’t prosper on the back of grapes alone. He recently bought 40 adjacent acres of land that will be used to expand the vineyard and the resort’s accommodation capacity.

And that’s all the more reason to visit a country on the cusp of a wine revolution.