Cycle series: A pleasant trip back in time 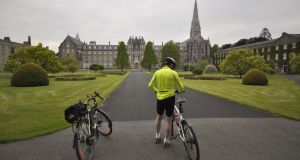 This is a really pleasant route, rich in history and interesting places, incorporating two short cycles along canal towpaths, two historical houses (the route passes through the grounds of both) and two significant figures from Irish history. It packs in a lot in a short distance and is convenient to residents of the Dublin commuter belt.

To start, leave Maynooth via the main street and follow Carton Avenue into the grounds of Carton House. It now operates as a four-star hotel and golf resort but public access is permitted.

Take the right fork just before the bridge on the grounds heading on to the Leixlip-Maynooth road. Cross over the road and swing left onto the Royal Canal towpath – which is excellent for cycling – just to the left of the Pike Bridge.

The canal towpath is a lovely way to avoid traffic on the busy R148 and to travel at a slower pace.

On the opposite side of the canal is the railway line and you will probably see a commuter train zipping by with its passengers much quicker than canal barges of the past would have.

The Royal Canal alongside Mountjoy Prison was immortalised in song by Brendan Behan in The Auld Triangle in his play The Quare Fellow.

I’ve often felt the canals need to be promoted as greenways out of the city for cyclists – how do you exit Dublin safely with its busy road network?

Stay on the towpath for about 5km, passing Deey Bridge and the reputedly haunted 13th lock. The canal starts to curve gently, passing under the Louisa Bridge and your exit is at the next bridge, at Confey.

Pass over the bridge and cycle downhill into Leixlip. The name in Irish, Léim an Bhradáin, recognises that the river Liffey was renowned as a salmon fishery.

Of course, before the multinationals located here, there was Guinness, which had its first brewery in Leixlip, so the town can rightfully claim to be the original home of Guinness.

Its associations with Guinness are now celebrated in the 14km heritage trail, Arthur’s Way, which becomes part of our route.

Follow the road down to the T-junction with Main Street, then turn left and continue as far as the River Liffey Bridge at the Salmon Leap, just to have a peek. Retrace your steps back up Main Street as far as the Spar shop. Turn left into the car park. It is probably best to walk along the riverside path to Main Street, turning left as you emerge.

The road curves to the right but you can take a shortcut up Old Hill. At the top, turn left and stay on the road. You will pass over the M4 after 1km. Just before that you might like to divert to see the unique corkscrew shaped Wonderful Barn, built in 1743 to store grain.

Continue on the R404 for another kilometre and turn right on to a side road that leads towards Castletown House.

This is another treat as you pass through the 1,100 acres of Ireland’s largest Palladian-style house, which was built in 1722. Today the house is in the ownership of the State and is a fantastic resource particularly for the neighbouring towns of Celbridge and Leixlip. There are also cafe facilities attached to the house, making it a perfect stopping point for thirsty cyclists.

Continue through the grounds and enter Celbridge. Keep straight down the main street, passing a statue of Arthur Guinness, who lived here in his early years.

Turn left at the traffic lights and cross over the bridge. Take the right turn (which is straight ahead) off the main road in the direction of Hazelhatch. Cross over the second canal that you encounter today, the Grand Canal, but with caution as this is a narrow humpback bridge on a busy road with poor visibility.

Swing right onto the canal towpath, which has an asphalt surface for the next few kilometres. Hazelhatch has many floating residents so you should see a lot of colourful barges.

This is very easy cycling for 9km on a great surface – and you can even stop off at the Lyons Estate cafe for another rest stop if you wish. Leave the canal at Henry Bridge (the second bridge after Hazelhatch) and head uphill for 2km before taking a right for Oughterard Graveyard, burial place of Arthur Guinness.

There are fine views across Kildare and Meath from the graveyard, which also contains the ruins of a round tower and a church that holds the vaults of the Guinness family.

Adding another layer of history is the fact that Daniel O’Connell, the Liberator, fought a duel near here in 1815 with John D’Esterre over criticism O’Connell made of the treatment of the poor by Dublin Corporation. D’Esterre died as a result and O’Connell always regretted this deed.

Another interesting nugget concerns the film Mission Impossible. In the film Tom Cruise’s character is told that the American president is unavailable “because he is fishing in Oughter Ard, Co Kildare”. The only waterway here is the Grand Canal and I don’t think he would have caught much more than a cold here!

This is the outer limit of our route. We return back down the hill to the canal but cross over this time and turn right into the village of Ardclough and follow the road back into Celbridge.

Turn left (to rejoin the road on which you exited Maynooth) and cross over the river, then turn right onto Main Street. Turn left onto the Maynooth Road close to the entrance to Castletown House. Stay on the road for 1.5km and take the second left onto Kilgowan Lane (the first left after Celbridge House pub).

Take the first right-hand turn and follow the main road back into Maynooth to your parking spot in St Patrick’s College.

Verdict: Great route with the family