Greece: Everything you need to know about that holiday you’ve booked

Greece is running out of money and its banks are still closed. Good place for your two-week break? 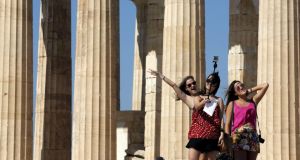 Holiday snap: taking a selfie at the Parthenon in Athens; most protests have been in the capital, away from many tourist destinations. Photograph: Jean-Paul Pelissier/Reuters

I have booked a holiday to Greece. Should I be worried?
Probably not. Apart from the fact that some class of deal between the Greek government and the powers that be in Brussels – and, let’s be honest here, Berlin – is most likely going to be struck before your flight takes off, tourists who have travelled to Greece in recent weeks have been largely unaffected by the turmoil which has engulfed the country. Having said that, it might be worth checking your travel insurance policy to see what cover you have just in case things shift dramatically in the days ahead.

What should I be checking my policy for?
It might be a good idea to have a policy that covers losses in the event of travel disruption and delays due to strikes. And if you have organised a holiday independently make sure your insurance policy covers “End Supplier Failure’. This will cover you if your hotel or car hire company goes to the wall.

This all sounds worrying, should I still go?
Absolutely. For a start it is a great – and possibly your only – way of showing solidarity with the Greek people. And they could do with a bit of solidarity right now. More importantly, perhaps (or at least more selfishly) if you have a holiday booked – either independently or through a travel agent – there is absolutely no possibility of you getting a refund now largely because the Department of Finance has not even come close to suggesting that it might be a bad idea to travel there. This means the choice is likely to be go on your holidays as planned or lose it entirely.

But what about money? Aren’t there restrictions on how much money can be withdrawn from ATMs?
Yes, and no – but for you, it’s mostly no. Anyone with a Greek debit card can only withdraw €60 a day from ATMs but as you are most likely to have an Irish card credit caps such as these will not apply and you will be able to take out as much cash as your bank at home will allow. There is a but, mind you. You will only be able to take money out of an ATM if it has money in it. Many bank machines across Greece have been emptied and those that do have money in them tend to attract long queues.

What about using my credit and debit cards in shops and restaurants?
Again, that should be no problem, in theory. All card machines in shops, restaurants and hotels are working as normal but some businesses – understandably concerned about the short-term future and their own cash flow – will only take cash. With that in mind, it might be a good idea to carry more cash with you than you normally might, although that comes with its own risks. The Department of Foreign Affairs has suggested taking more than one means of payment – cash, credit cards, debit card and even travellers cheques, if you can remember what they are. It also advises that people take enough cash to cover emergencies, unforeseen circumstances and delays. But don’t doing anything stupid like flashing it around or keeping it all in one place.

Am I likely to be caught up in any protests? Probably not. Most of the protests have taken place in Athens and tourist areas have been largely unaffected. It is also worth remembering that Greece is one of the safest countries to which you can travel.

Grand so, are there any deals to be had?
Apparently there are. Some sources have reported this week that last-minute bookings for many areas popular with tourists all but dried up at the height of the crisis which means there is still plenty of availability so it comes down to supply and demand. The Greek Tourism Confederation said on Thursday that it had seen a 30 per cent drop in last-minute bookings, which typically account for one-fifth of bookings to the country. “We believe that a swift conclusion to the Greek government’s negotiations with the country’s creditors would still give us sufficient time to make up for the loss – as far as possible – in last-minute bookings,” Andreas Andreadis, chairman of the confederation, said.

Where are the cancellations coming from?
Germany, mostly. Nearly two million Germans book package holidays to Greece each summer and with relations between the two Gs somewhat strained of late, new bookings have slowed significantly – the most notable slowdown came immediately after June 26th The good news for the Greeks is that many of the German holidays were booked and paid for months ago and with no refunds being offered, the many Germans will have to travel there anyway.

And when I am there, should I talk about the crisis?
Do you know what? Listening to tourists talking about the crisis is probably the last thing Greeks want right now so maybe you could talk about football, the weather or the shock break down of Vogue and Brian’s marriage – in short, anything but the crisis. But if you do feel compelled to mention it, can we suggest that you adopt a tone of empathy? It’s Greece today but it could have been us back in the day. . . and to be honest, it still could.