Familiar names from folklore, such as Fionn Mac Cumhail, Oisín, the Fianna, Diarmuid and Gráinne, are all associated with these hills 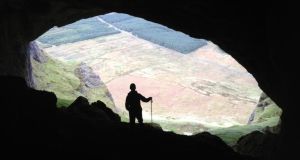 The Horseshoe Road in Gleniff is a lovely scenic 8km looped drive or cycle, deep in the Dartry Mountains of Co Sligo. It is also known as the “magic road” because a stretch of it apparently allows your vehicle to freewheel uphill! Recently, while cycling the loop, I met two US visitors who came with surveying equipment to check it out. I couldn’t help, having found it hard work all the way around! That said, there is magic in the air.

The area has more than its fair share of megalithic tombs – and legends abound of heroic figures, hunts, jealousies, magic spells and evil enchanters. Names familiar to us from folklore, like Fionn Mac Cumhail, Oisín, the Fianna, Diarmuid and Gráinne are all associated with these hills; they add a real magical “feel” to the high mute limestone escarpments and their incessant swirling winds, evoking WB Yeats’s imaginative hidden and hiding world unseen and unfelt by the rest of us.

High above the southwest corner of this magical road is a grim mouth-like opening in the mountain, almost at the top of the escarpment, known as the Cliffs of Annacuna. Unmarked and unnamed on the map, this is not the legendary “fairy door” of Benbulbin, but a fascinating natural limestone cavern, seemingly the highest cave in Ireland – and having spotted it from the bike, I just had to come visit.

And so, weeks later, my son and I trudged up nearly 300 metres of grassy talus slope, steepening just short of the cave mouth where a fixed rope has been installed.

The cave is a dry inactive system, the mountain topography so changed by aeons of glaciations and weathering that its ancient rain-gathering catchment is long gone. But it is beautiful, a huge chaotic and complex space, or series of spaces and levels, where natural processes have acted immensely more slowly than on the glacially riven land surfaces outside.

To us the cave was a wonder, revealing itself over two hours of exploration with powerful head-torches and careful footwork. It is really two caves: a little inside the mouth, one system runs slightly upwards at first, then down through a series of levels deep into the mountain; the other runs continuously upwards to the right, narrowing as it goes, seemingly to within metres of the plateau surface above. It may be the same system with a bend or “elbow” opened to the sky, by the action of a powerful much younger valley glacier?

Ancient collapse debris litters the floor, but there are also perfectly smooth tributary tunnels, where ancient rain, from ancient weather systems, once gurgled and flowed deep into the mountain, dissolving it as it went.

This is known as the “Cave of Diarmuid and Gráinne”, the last resting place of Diarmuid who, one legend has it, died of his wounds while hunting with jealous Fionn, and of broken-hearted Gráinne, who died by her own hand and whose last view was of Gleniff, out through the mouth of the cave. It is well worth a careful visit. All you need is a good pair of boots and your imagination.

Correction: This article should have pointed out that the land in question is privately-owned and not open to the public.

Dr Muiris Houston: ‘For me, the most shocking Covid-19 statistic of all is this…’
9

‘I might be crazy’: The people who set up new businesses during Covid
10