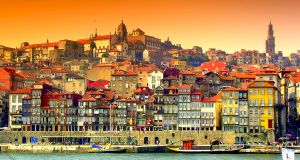 The centre of Porto, which retains many of its original 18th century buildings, has been classified as a world heritage site by Unesco

The only thing I knew about Porto before arriving there was the famous drink that takes its name from the city – port. I did not even know it was on the Atlantic, that’s how well-up on I was on this beautiful, celebrated city north of Lisbon, which is in fact Portugal’s second city.

Porto, which has a flying time of just over two hours from Dublin, now has direct flights with both Aer Lingus and Ryanair. As a result, it has become increasingly popular with Irish visitors, especially for weekend breaks: our Friday flight over was full.

The drive in from the airport along the coast is gorgeous: on one side, big sweeping views of ocean and surfers, and on the other, higgedly-piggedly houses on hills and simple seafood restaurants, where fish is grilled outside, even in winter. It’s like a Portuguese California.

The centre of Porto, which retains many of its original 18th century buildings, has been classified as a world heritage site by Unesco. I hadn’t known that either. Porto is built on hills and slopes, and the river Douro divides it from the city on the opposite side, Gaia. You’d assume Gaia was in fact just another part of Porto, but it’s a complete and independent city. The Douro river is spanned by several striking metal arch bridges, one of them, a former railway bridge, the Ponte Dona Maria, was designed by Gustave Eiffel in 1877.

Our hotel, the Pestana Vintage, is on the riverfront: a series of adjoining 16th, 17th and 18th century buildings. It’s a prime location, and the 1950s-style interiors – formica side-tables, vintage radios, chairs with spindly legs – are a quirky modern complement to the old buildings.

Gaia is also built on hills and slopes, and is where the majority of those famous port houses have a presence. Their names are painted metres high on the facades of buildings attached to the steep hillsides, and visible from the other side of the river. There’s Taylor’s, Graham’s, Sandeman, Offley (nothing to do with our midlands county), Cockburn’s and many others.

We went for a tour of Graham’s port house, where 72 years is the average age of the casks in its cavernous cellar, which dates from 1890. Tours and tastings cost between €10 and €100, depending on the age and rarity of the port you’ll be trying. If you really want to drink something special, there are 656 bottles left in stock of Graham’s 1882 vintage, at a cool €6,000 each.

This port house also has a restaurant on the premises, the Vinum, with wonderful views out over the Douro river. One of the specialities here is the beef, which is fire-grilled on the bone in giant salt-rubbed hunks and comes to table sliced up rare on platters for a group to share.

Porto, like several other cities and towns in Portugal, has some beautiful examples of azulejo, the blue and white ceramic tiles that decorate the facades of buildings and public spaces. The city’s most famous example of azulejo is the railway station: its magnificent entrance hall is entirely covered in these tiles, depicting historical scenes.

While the railway station is Porto’s most famous example of azulejo, the casual joy of the city is the many private homes and small shops that incorporate the tiles into their facades. We are brought into one such shop, in the old city, that only sells religious artefacts. It’s not the rosary beads, the children of Prague, or the crucifixes that our guide wants to show us; it’s what’s behind the sliding glass doors of a display cabinet. Within are several objects made of wax. I look more closely. Is that what I think it is? It is. It’s a heart. Over there is a breast; beside it, a hand; on the shelf underneath, a nose. There are wax babies, adult-sized ears, feet, legs and many other body parts. To be frank, it’s pretty gothic.

These wax objects are all for sale. The tradition is that should you or someone dear to you have some kind of illness, you buy a wax image of the relevant body part, and bring it to a church shrine. The hope is that this ritual offering will aid with recovery.

From wax noses and breasts to Portugal’s most famous bookshop, the Livraria Lello on das Carmelitas. There is, amazingly, a queue to gain access; a queue for which you have to buy €3 tickets, which can be redeemed against a purchase. I spend a couple of minutes thinking how cultured the Portuguese are, that they will queue to get into a bookshop, until I am enlightened as to the specific attraction of Lello’s. While it has always been a beautiful and beloved bookshop, the fact is that when one JK Rowling lived in Porto teaching English all those pre-Harry Potter years ago, she often went there. Lello’s apparently was then the inspiration for Flourish and Blotts, the bookshop in the series. The people queuing are tourists and Harry Potter fans.

Inside, Lello’s is genuinely charming: a small, narrow, wood-panelled bookshop with a dramatic, double-forked staircase that looks as if it is, well, right out of a Harry Potter set.

There are river cruises on the Douro that you can take all the way to the Douro valley itself. We went by bus, but if you had more time, I can’t imagine a more peaceful arrival at Pinhão than gliding along the river for a few hours from Porto.

The picturesque Douro Valley is the oldest wine region in Portugal, where port is produced as well as wine. The Quinta da Roêda vineyard is here, as are more than 40 others, which are open to the public. Some have accommodation, and you can walk, cycle, drive or boat between them. At the Quinta da Roeda vineyard, a quarter of the output is still pressed by the age-old method of foot-stamping, for four hours at a time, in the stone basins onsite, as photographs on the wall attest.

The standout restaurant in the region is the DOC, on the Douro river, at Armamar. Its chef, Rui Paula, was awarded a Michelin star this year for his restaurant, the Casa de Chá da Boa Nova, at Leça da Palmeira. The stars had only recently been awarded when we visited, and, unsurprisingly, this sister restaurant was packed, including several families with very small children, which was refreshing to see, proving a top-class dining experience can be a family-friendly one.

We had Sunday lunch here, on the misty riverside, with some classic Rui Paula menu highlights. They included a fish and lobster broth, with chunks of lobster; turbot with basil gnocchi; and a rack of baby lamb with three kinds of Jerusalem artichoke, pureed, in crisps, and in small batons. It’s classic cooking, done very, very well.

He’d probably do very well in MasterChef, someone at the table jokes. What’s that? Rui Paula is a judge on Portuguese MasterChef? No wonder the restaurant has a big screen up that has a live feed of activity in the kitchen. It’s probably only a matter of time before the DOC at Armamar gets its very own TV show.

Rosita Boland was a guest of the Porto & Northern Portugal Tourism Board. Ryanair flies year round to Porto. visitportoandnorth.travel/ visitportugal.com