On a high in the Isle of Skye

The largest and most northerly of the Inner Hebrides has rugged mountain scenery, pretty towns, Michelin-starred food, and of course, a decent dram 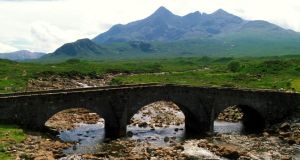 Looking across a bridge towards the rocky ridge of the Cuillin mountains from Sligachan, the Isle of Skye. Photograph: Paul Tomkins/Visit Scotland

Island envy is a likely side effect of visiting the Isle of Skye, the largest and most northerly of the Inner Hebrides. Our own islands of Aran, Tory and the Blaskets can seem somewhat diminished when compared to the sheer melodrama of this iridescent archipelago – without even considering their thriving tweed, whisky and shellfish industries.

But such comparisons are unfair: Skye is 550-times the size of Inishmore, Ireland’s largest island. Its most dramatic feature, the Cuillin mountain range, is on the scale of the Alps or the Dolomites, a jagged black vastness of diabolically twisted basalt and gabbro, featuring more than 20 summitable Munros (peaks over 3,000ft). This Hades-like expanse is what first emblazons itself on the visitor’s consciousness as you approach the Kyle of Lochalsh, where a road-bridge has arced out from the mainland since 1994.

Skye boasts one of Britain’s truly outstanding landscapes; an intimidating egg box of soaring peaks with heather-clad moors and wind-gnarled peninsulas radiating outwards, separated by seal-rich lochs, towering sea cliffs and turreted clan castles. The landscape is as vast and barren as Iceland, with that backlit verdant greenness one associates with the Faroes.

Surprisingly for somewhere so untamed, it is Scotland’s third major tourist destination, after Edinburgh and Loch Ness, but the scarcity of roads and sparse population makes it easy to lose oneself on a craggy peninsula or shingle beach where you are entirely alone, apart for perhaps a deer at a plunging waterfall or a golden eagle scanning a heathered summit. Most visitors stick to the Trotternish peninsula and the towns of Portree and Dunvegan, pleasant spots in their own right, but lacking the breathless wildness of remoter stretches. In the Highlands, one is always looking for that visceral quality unique to marginal areas; a sense that one can breathe more deeply, or at least, more consciously.

The island’s capital, Portree, is a pleasant pastel-painted harbour with some decent crafts shops, good cafes and an excellent chipper down at the pier.

The loop road from here around the Trotternish peninsula is as obligatory for the tourist as the Ring of Kerry, its highlights being a wind-sculpted rock pinnacle known as the Old Man of Storr and a valley of smashed up boulders known as the Quiring. Both can be obliterated when the mist rolls in.

The name Skye comes from the Norse sky-a, meaning cloud island, and finding oneself enshrouded in vapour is a common experience. Indeed, the locals call their island, Eilean a’Cheo, Isle of Mist, or at least that’s what they used to call it. While 31 per cent of the island officially claimed to speak Gaelic in 2001, it is rare to hear it, apart from around Sabhal Mòr Ostaig, Scotland’s only Gaelic college. Certainly, the few I tried my Irish on hadn’t even the equivalent of the cúpla focal to reply. When one hears a place name such as Edinbane or the Kyle of Lochalsh uttered by a local who has no idea that the former derives from An t-Aodan Bàn (the white façade) or the latter from Caol Loch Ailse (the narrows of Loch Ailse), it brings on a pang of sadness, and a hope that Ireland doesn’t face the same future.

When the mists and monsoon-like rains roll in, there are dozens of art galleries, craft studios, crofting museums and castles to see. There’s the evocative Museum of Island Life on Trotternish peninsula. This is a series of vernacular buildings preserved since 1965 as an example of 19th century Hebridean subsistence culture, with a village smithy, crofter homestead and weaver’s house. Nearby are imposing clan Donald castles at Duntulm and Armadale – glimpses of chieftain life, with rooms full of portraits and memorabilia, most significantly those connected with Bonnie Prince Charlie and his brave saviour Frances MacDonald. If you’re not familiar with their tale of Jacobean daring-do, you won’t escape the island without hearing all about it.

For those wishing to see just one medieval fort, head to Dunvegan Castle on Waternish peninsula. This imposing bastion has been the ancestral home of the chiefs of clan MacLeod for 800 years. Their wooded highland estate overlooking Dunvegan Lough radiates a legacy of past glories and defeats, and still houses the Fairy Flag from the seventh century (allegedly), which guarantees success in battle if unfurled. It has been used twice already to secure MacLeod victories and can only be used one more time. Surely the Scottish independence referendum would have been an ideal occasion? There’s also the Dunvegan Cup, gifted by the O’Neills of Ulster in gratitude for the clan’s support against the marauding forces of Queen Elizabeth I.

Waternish peninsula was cleared of crofters (small-scale farmers) during the Highland Clearances of the 18th and 19th centuries and is only now recovering as a centre of traditional crafts. The stand-out producers are Skyeskyns, one of only two remaining sheepskin tanneries left in Britain, producing luxurious, natural hand-combed fleeces, and the Skye Shilasdair Dye House, which produces naturally-pigmented yarn and has demonstrations of the dying process and a garden with specimens of the plants used. On the neighbouring peninsula of Duirinish these yarns are then woven into tweed throws, blankets and scarves by a couple calling themselves Sky Weavers, using a pedalled loom from the Isle of Harris, which lies directly north of them.

Regarding travelling to Scotland, there’s an embarrassment of planes and ferries from every corner of Ireland, but the most practical way of reaching Skye is by flying to Inverness and then renting a car, or else taking a train to the Kyle of Lochalsh and then walking or getting a bus across the bridge onto the island, where you can hire bikes or use the local bus service, but distances are long and roads can be bleak and remote.

In terms of accommodation there are a plethora of B&Bs, with a few campsites and hostels (known as bunkhouses), but the two places that get most attention are Kinloch Lodge, owned by the high chief of the clan Donald (Lord Macdonald of Macdonald), who has 10 rooms steeped in the family’s heritage and history and a Michelin-starred restaurant serving local lobster, quail and scallops in a dining room of antiques and gilt-framed ancestors.

The other is Three Chimneys on the north-westerly-most peninsula, also with a Michelin-starred restaurant in a traditional crofter’s cottage and six subtly luxurious suites overlooking Loch Dunvegan.

Both of these places regularly make the lists of the world’s top getaways. While the decor at Three Chimneys is more contemporary, the food is just as rooted in the locality as Kinloch’s, with langoustines on tattie scones, coral roe under a local hazel crust, pickled whelks and island venison with garden rhubarb. For breakfast, expect kedgeree with peat smoked salmon, or porridge sanctified with single malt whisky.

And let’s not kid ourselves, whisky is one of the core reasons to visit the Hebrides. The wild landscape and the tweed seems to have met its quintessence in liquid form in single malt whisky. While some of Scotland’s whiskies can be overly peaty, the island malts are more subtle and sea-washed. Skye’s whisky is Tallisker, with an appropriately picturesque distillery on the shores of Lock Harport looking out at the Cuillin Hills. The 45-minute £8/€11 tour is fine, but really it’s worth committing the time and money to the two-hour £35/€48 Tasting Tour to get a full appreciation of what the Scots are trying to achieve with their finest malts.

Make sure you drive on out to the glorious Talisker House where Dr Samuel Johnson and Boswell stayed during their famous tour of the Western Isles, and walk down the valley to Talisker Bay. The landscape here has the sweet, full-bodied allure of the single malts you’ve just been sampling. It is the lifeblood of Skye, and once it’s coursing through your veins you’ll find it hard not to return.

HOW TO . . . SKYE
Getting there: Dublin to Inverness from €85 with FlyBe, flybe.com. Dublin to Edinburgh/Glasgow with Aer Lingus, aerlingus.com and take the train across Scotland. Ferry from Belfast or Larne, stenaline.ie or poferries.com