Where two-wheels rule the roads

The long road home: In southeast Asia entire families ride atop scooters or motorbikes with ease, but not me 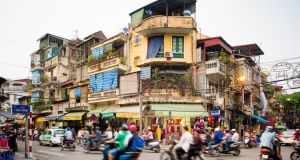 On two wheels in Hanoi: “There are five million motorbikes in the Vietnamese capital 2030.” Photograph: Getty Images

Like taking off your shoes inside and bottles of sweet chilli sauce on the dinner table, it seems that dodging and weaving through scooters and motorbikes speeding towards you full pelt is simply a big part of life in southeast Asia, one that cannot be avoided. It’s a reliable common denominator in most of the countries I’ve been to so far – certainly in Thailand, Cambodia, Laos and Vietnam, two-wheeled transport is undoubtedly king.

The feats of bravery, ingenuity and downright recklessness are something else. Entire families ride atop one machine with ease – toddlers wedged happily standing up between parents, the pet dog perched in the leg space below.

I’ve seen huge glass dining tables being transported, massive trees in planters that take up half the street, unwieldy roosters tucked under a driver’s arm, and four pigs in a cage strapped to rear seats. A friend even clocked a proud couple leaving a maternity hospital in Vietnam, with a bundle that looked suspiciously like a tiny newborn baby being driven away on a motorbike. Nothing too big or too small, it seems.

I was chatting about this wall-to-wall two-wheeler situation with a fellow Irish traveller recently. I pitched to him my big idea: scooters and motorbikes as a means to solve the rural isolation and public transport problem back home in Ireland. My companion astutely pointed out that the issue in Ireland would be the wind, cold and rain, which would mean everyone would have to wear leathers.

Frankly, I don’t see that as a negative. As long as your great-granny in Dingle can quickly and safely get from A to B on her moped, who cares if she’s wearing full on Hells Angels biker gear? Get me Shane Ross on the phone. I’ve bloody well cracked it.

That said, I haven’t dared yet to commandeer one of these vehicles. I can’t drive a car, and the rules of the road over here seem a great deal more fluid than what I’d be dealing with at home on the N7. In Cambodia and Vietnam especially, lanes and even the direction of traffic flow seems more like a vague, half-hearted suggestion than anything too strict. (Helmet-use tends to be hit and miss too, despite laws and fines in operation.)

There are five million motorbikes in the Vietnamese capital of Hanoi. What is surprising is that the city is attempting to phase out the vehicles by 2030. People are sceptical, but Yangon in Myanmar has had a similar ban since 2003 – although it hasn’t done much to help the fumes and traffic.

It can be a drag for me sometimes, refusing to hop astride a motorbike, feeling distinctly like the odd one out. There’s a niggling feeling that you’re missing out on a rite of passage, especially in places where a motorcycle loop is the major tourist draw, such as the Bolaven Plateau in Laos or the Ha Giang region of Vietnam, to name but two supposedly epic trails.

A few stops along the way, such as the quiet town Kampot in Cambodia or the scooter-overrun hippie commune Pai in Thailand, people have encouraged me to take the handlebars and set off into the sunset. I’ve held firm. Why? Nervousness mostly. Plus, the frequent sight of grim-faced backpackers laid up on crutches and plaster in hostel lobbies, looking down in the mouth about their lot, most likely googling their insurance details and the fastest route back to Bangkok to get their various scrapes seen to.

But that’s travelling, isn’t it? We choose our own adventures, and luck and chance play a big role in how it’ll all turn out.

In Kratie, a small town in Cambodia near the border to Laos, I took my own leap of faith. I rented a push bike and cycled on the road to go dolphin watching. It was a very hot, dusty journey and the first time I’ve ever tackled cycling in traffic – let alone facing oncoming lorries, motorbikes, rogue chickens and waving Cambodian kids eager to say hello. That cycle was enough of a mini personal victory for me. There was no engine involved, but it feels like I’ve come pretty far in the past four months, even without one.