More than three million transatlantic passengers travel through Dublin in 2017 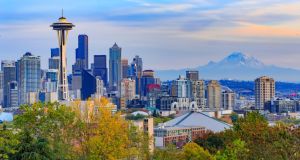 Aer Lingus chief executive officer Stephen Kavanagh today announced the launch of a new transatlantic service to Seattle, in Washington State, the second new route to North America announced this year. It will bring the number of Aer Lingus routes to the United States to 15.

Commencing May 18th 2018, flights will operate four times a week to Seattle Tacoma airport. The city, on the north-west coast, is home to many multinational organisations that have operations in Ireland. The biggest employer in the city is Boeing, while Microsoft and Amazon also have bases there. These companies have substantial business relations in Ireland, with plans for expansion.

In October, the airline announced a new service to Philadelphia from March 25th, 2018. It will compete directly with American Airlines on this route.

The number of transatlantic passengers travelling through Dublin Airport this year will exceed three million, increasing from 1.5 million a year a decade ago.

Since Aer Lingus became part of International Airlines Group IAG it has planned to increase its fleet to enable more transatlantic flights via Dublin and Shannon from the UK and Europe.

The three major US carriers, Delta, United and American Airlines, have all increased their routes and capacity for Ireland this year. Next summer, Delta will operate daily flights from Dublin to New York, Atlanta and Chicago and a daily service to New York from Shannon.

Norwegian, which began services in July 2017 from Dublin, Cork and Shannon to two US east coast airports – Stewart International Airport and TF Green Airport in Providence Rhode Island – will be continuing its existing 18 flights per week next year.

Services to Canada have also increased in recent years and there are now six airlines providing services. Air Canada has taken the Toronto route back to a full service carrier year round from Dublin. Aer Lingus also operates to Toronto.

Air Canada Rouge, the low cost carrier, will return in the summer with up to five flights per week on the Vancouver route.

For 2018, Air Canada will also be launching new seasonal flights from Dublin to Montreal and Shannon to Toronto, beginning in June. Both services will have four flights a week and will be operated by Air Canada using the newest single-aisle aircraft, the Boeing 737 Max 8, with Premium Economy and Economy cabin configuration.