Walk for the Weekend: The gentle hills of the western Knockmealdowns 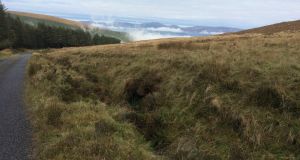 Hillwalking has become very popular, with more than 2 million overseas visitors coming to walk and hike in Ireland last year

Áit iargúlta is an evocative Irish expression that succinctly captures the wonderful aloneness I experience when visiting a special place in the Knockmealdown Mountains. Remote and little frequented, but imminently accessible, the area above Crow Hill car park immediately puts me in mind of youthful days when, in the style of William Wordsworth, I wandered lonely as a cloud through swathes of beguiling countryside.

If you believe Wordsworth was right – that the uplands are best sampled in solitude – you may now feel your ship has sailed. Hillwalking has never been more popular, with more than 2 million overseas visitors coming to walk and hike in Ireland last year.

Finding true solitude on any of our most popular trails is now increasingly problematic, but fortunately there are still refreshingly less-frequented landscapes where mostly you won’t meet another soul. The gentle hills of the western Knockmealdowns are one example.

To explore the moorland landscape west of Bay Lough, I set out from the car park at Crow Hill, which is located at a walker-friendly elevation of 455m. After ambling north along the public road, I then followed waymarkers for the Blackwater Way, east through magnificently empty terrain. A stony path conveyed me gently but idiosyncratically uphill for about 1.5km to reach the high point of Knockclugga where a hypnotically attractive vista unfolded over the Waterford countryside: a land of slow flowing rivers, rich pastures and soft-focus colours.

At a point where the trail began descending again, I bade adieu to the marked trail and headed north along a broad ridge with gently rising ground to reach Knockshanahullion (652m) – the highest point of the western Knockmealdowns.

The summit is topped by a large bronze age burial cairn, which has been considerably disrupted, but still serves what was, perhaps, it original purpose: whispering eloquently from the dawn of history about the beliefs of our ancient forbearers. Further reward came from an inspirational view across the Golden Vale to the Galtee peaks; flat topped and angular to the west, gentle and rounded to the east.

Leaving the summit, I descended southeast heading towards the corner of a fence. The fence led me east but when it swung south, I struck out towards point 630m. Clever clogs that I am, I didn’t follow a direct route but arced a little to the south to avoid losing height in the valley of the Glounliagh river. Here, the summit was crowned by a smaller cairn with the most compelling views unfolding east to Sugarloaf Mountain and the Knockmealdown Ridge.

Continuing east for a couple of hundred metres, I encountered another fence leading south with a gradual descent to reach a three-fence intersection where the way was right along a trail that skirted a forest edge. Taking the first right and later the right option at a three-way junction, I soon rejoined the waymarkers for the Blackwater Way. Now, it was a question of following the yellow walking arrows over Knockclugga and then downhill to my start point, not having encountered another soul all afternoon.

Here I concluded that easy access to magnificent summits is the unique selling point of the western Knockmealdowns.

Getting there: From the south Tipperary village of Clogheen, take the R665 for Ballyporeen and then go left at a sign for Shanrahan Graveyard. Continue to the highest point of this road and park in Crow Hill car park.

Suitability: Moderate challenge requiring reasonable fitness. The arrows for the Blackwater Way and a network of fences reduce but do not eliminate the need for navigation skills.

Lockdown letters: ‘Life is all about making connections’
9

Ask the Expert: My husband has a very short fuse with kids
10