A sight for saddlesore eyes in Co Laois

Cycling: The route from Abbeyleix to Wolfhill takes in the stunning Masslough lake and Fossey Mountain 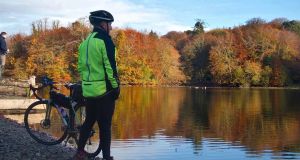 Masslough, on the edge of Ballinakill, is hidden away from view, and what a stunning lake it is. The views from Wolfhill and Fossey Mountain are breathtaking in all directions, and the roads are great for cycling.

Abbeyleix, bypassed by the M8 in 2010, is one of the oldest planned estate towns in Ireland. Built by the Viscount de Vesci, it has a tremendous built heritage to explore. One famous stopping-off point is Morrisey’s Bar, built in 1770. Situated on the main street, it is one of Ireland’s favourite pubs. A must-visit, but probably better to visit after you complete the route.

Cycle down the main street, with Morrissey’s on your right-hand side. Rather than take the main route to Ballinakill, which is winding and dangerous, there is a safer alternative just on the edge of town, off the N77. Turn left onto the L5731, which will bring you to the edge of Ballinakill. After 5km turn left onto the L5735, which takes you into the village. Continue up the main street through the square where there is a monument to the 1798 rebellion.

Take a right-hand turn, signposted as Laois Cycle Route A. This road turns back around the village past an entrance to beautiful Heywood Gardens and around the Masslough road. The lake appears as if by magic, one of the best-kept secrets in Laois.

When I visited, it was a classic autumnal scene: a semi-circular silver lake, bordered on three sides by native woodland and a riot of autumn colours. The sun burst through just as I stopped, and the colours became even brighter reds and yellows and golden browns. The only sounds were of the abundant birdlife on the lake, including swans, ducks and herons on the far side. I could have stayed all day but it was time to move on.

Continue past the lake and the wood and turn left at a T-junction (ignoring the signs for the Laois Cycle Route), then a right shortly after onto the L5732 as far as Ironmills Bridge. Turn sharp left onto the L1738 and continue on to the L1829 all the way into Castlecomer, turning right at the junction on the edge of town. Proceed into the square and turn left. Continue to the end of the town and out past Castlecomer Discovery Park.

Continue out past the Ormonde Brick Factory and turn left on to the L5874. The road runs straight for about 4km, parallel to the N78. Continue into the village of Clogh. This is quite a populated area with houses scattered across the plain; most people in the area would have been employed in the collieries in times past. Pass through Clogh and onto the “new village” of The Swan.

The village was built after the opening of the Flemings Fireclays factory in 1935. Flemings provided all the houses in the village until 2003 when two new developments took place. The factory is now owned by Lagan Brick. Cross this dangerous crossroads with care and continue up the hill for 3km to the top and turn left at the sign for Wolfhill Church. The views across Laois, Carlow and Wicklow are spectacular on a clear day.

Continue past the church and on the descent make a left-hand turn onto the L3850. Turn left after 2km at the next crossroads onto a heavily wooded road and continue as far as the crossroads with the R426, the Swan-Timahoe road. Cross over and continue downhill but be careful as the surface here is not good. Turn left at the T-junction and proceed for 3km to another crossroads, where you turn right.

The L7780 will bring you into the village of Ballyroan where you turn left onto the R425, which takes you back into Abbeyleix.

Verdict: Packs in some great scenery

Start/Finish: To reach Abbeyleix, exit the M7 at Junction 17 and turn left at the top of the slip road. Follow the N77 for about 12km. Park on the main street or around the square.