Going solo: A walk like no other in Patagonia 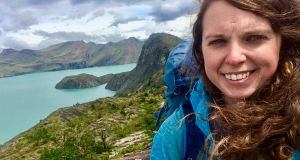 Sharon Quigley in Torres del Paine National Park in Patagonia, Chile: “I had seen for myself the power and unpredictability of the Patagonia weather. I could go from applying suncream to eating snowflakes in the space of five minutes.”

Maybe I’d watched Wild with Reese Witherspoon too many times, but there I found myself frantically filling sandwich bags with powdered mash in preparation for one of my slightly stupider ideas – a seven-day solo female hiking adventure in Patagonia. I had notions of completing the Q circuit in Torres del Paine National Park, southern Chile, self-guided and carrying all my own camping equipment and food for a week.

My only previous self-equipped multi-day camping experience consisted of soggy weekends at Electric Picnic (where the biggest concern was running out of lukewarm cans of Bulmers), so venturing into Patagonia’s puma-filled wilderness alone was certainly going to be a personal challenge.

“Surely a structural engineer could erect a tent,” she nervously said to herself, as she practised in the back garden of the hostel, cracking one of the tent poles in the process – great start.

Chile’s premier hiking location has had a huge rise in popularity over the past few years, so now getting campsite reservations for Torres is harder than hiking the trails. Once I finally had all my campsite bookings, achieved only by going into the different campsite agencies in person (“Oh yeah, we stopped replying to emails in August”), I began organising everything else.

Keeping my pack light was my main priority when it came to packing. Soap, shampoo and a towel were luxury items that didn’t make the cut – I’d just be smelly for a week instead. I had one set of clothes for hiking and one precious warm dry set for nighttime carefully wrapped in a plastic bag.

Water was readily available on the trail, one essential heavy item I didn’t have to carry, so I designed my gourmet menu for the week around this huge advantage. It consisted of as much powdered food as possible – powdered soup, powdered mash and powdered milk, with some dehydrated mince to spice things up. While making mashed potato out of dust felt slightly insulting to my proud potato loving heritage, it was light, fast and gas-canister efficient.

I started hiking from Paine Grande counter clockwise. There are three main park trails based on the letter shape the trails roughly map out – the most popular four-day W trek, the full eight-10-day O circuit over Gardener Pass or the Q trail (the O circuit plus one more additional trek out of the park).

I had accidentally booked a seven-day Q circuit, a day less than the usual normal person itinerary (idiot), and unable to add an additional night once I realised my error, it was decided – I’d just have to do a lot of walking.

Aquamarine lakes, snow-covered mountain towers, iceberg-filled lagoons and glaciers dating from the ice age induce involuntary “Oh Wows” as you meander through the park’s dramatic landscapes. Drinking straight from the streams like a happy dog (the best water in Chile) I was soon drunk on nature, loving the idea that I had everything I needed for a week right on my back.

Pitching my tent for the first time in the park, I managed to lose two tent pegs (idiot strike two). With the Patagonian wind, those tent pegs were essential – luckily the campsite reception had two old, slightly bent pegs they donated to my cause and I was back in business.

I hiked up to Británico mirador in Francés valley the first day, and got really lucky on day three with perfect clear blue skies at the famous three Torres. I began the backside of the full circuit, arriving into Serán campsite late evening on day three.

That night, however, I heard from other hikers that the Gardner Pass was still closed because of dangerous conditions. The pass hadn’t opened yet for the season due to the weather, very unusual for November, and apparently only guided groups were going through, or hikers willing to sign their life away on a disclaimer form. I had entered the park three days ago, informed the pass would be open by the time I got there, but Patagonia weather doesn’t adhere to any schedules. I was now forced to make a decision – either continue on the trail hoping the weather would improve (before I ran out of food), or backtrack and hike the west side of the park I hadn’t seen yet.

What I had lacked in experience up to then I had tried to make up for with pure stubbornness, but I also didn’t want my stubbornness to lead to stupidity. Trying to take my pasty Irish legs (one having a reconstructed anterior cruciate ligament) up a closed steep and icy trail was perhaps less tough and more stupid. ‘Irish woman lost in waist-deep Patagonian snow’ would be a less than ideal headline.

Was this the lesson I had to learn from Patagonia? To make logical rather than emotional decisions, and despite all the buses and sandwich bags that had got me here, I needed to accept that the weather was to win this round.

I had seen for myself the power and unpredictability of the Patagonia weather. I could go from applying suncream to eating snowflakes in the space of five minutes. The wind at night was like sleeping in a mini hurricane, and I awoke several times delighted the tent canvas hadn’t shredded or poles bent. On day six I saw a car flipped over by the Patagonia breeze. Conditions here were very variable and potentially extreme. Time for plan B. I still had another two days to explore the western side of the park so the adventure wasn’t over yet.

I got the bus and ferry combo back to Paine Grande on day six to hike the final leg of the W trail to Glacier Grey. However, I spent too long up in the cafe hiding from the wind and when I got down to the dock I was told the ferry was full. Despite my pleading in Spanish to be allowed on, they were untying the boat to depart. Some Germans I had befriended on the back circuit were onboard and saw me stranded. They told the boat people “she’s with us” – and the emotional blackmail worked, they let me stow away on to the full ferry. Hooray! People onboard who had been observing my idiot numero three moment cheered when I emerged inside with my dirty rucksack. There were Germans actually breaking rules to help me out – this place was amazing!

On my final day, I packed up my tent from Grey campsite for the last time and hiked out of the park. The final 173km trek I ended up walking over seven days in Torres National Park wasn’t what I had planned and didn’t resemble any letter in the alphabet. I hadn’t completed the full circuit but I was walking out of the park after a great week’s adventure in Patagonia, now a solo female hiker with blisters, bruises and memories of the most incredible landscapes. As I overheard another hiker saying to a friend, “You can take as many photos as you want, but nothing beats seeing it with your own eyes”.