A Cannonball run, Liverpool at Anfield, and early-bird family holidays

Great Escapes: Wow Air’s cheap flights to the US, no single supplement in Westport 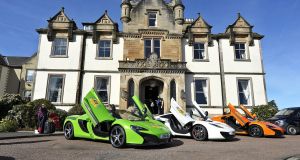 Cannonball run: the Lions Trip will be zipping across Ireland, Wales, England and Scotland in March

The Lions Trip Cannonball run will be zipping across Ireland, Wales, England and Scotland in March – and you can sign up to take part, as long as you have a supercar, movie-themed car, American monster car or wacky vehicle to bring along. You’ll be staying in lovely hotels and making great food stops in the Brecon Beacons, Highlands of Scotland and Glens of Antrim before returning to Dublin. The price for the event, which takes place over the weekend of March 23rd-26th, is €1,300 per person; cannonball.ie.

Ready to book a family holiday?

January can be a great time to book family holidays, with travel agents and tour operators offing discounts and other incentives. TUI Holidays – formerly Falcon – has a low deposit of €75, free child places and discounts on summer holidays. Cassidy Travel has family holidays from €662 for three to European seaside resorts. Clickandgo.com uses Aer Lingus for its sun holidays and asks for a deposit of just €1.

If you fancy staying in a family home in Florida, Kissimmee is close to Orlando and its theme parks. A week in an “executive home” with a pool costs from €489 per person sharing with flights and car hire. Book by January 31st with americansky.ie or call 01-6649979. You can buy discounted attraction tickets in advance in Ireland from attractionticketsdirect.ie.

If you like cruising you might be interested to hear that Royal Caribbean’s Independence of the Seas is sailing again after a refurbishment. On June 16th it leaves Southampton, on the south coast of England, for a two-week round-trip cruise of the Mediterranean that will take in Cartagena, Palma de Mallorca, Barcelona, Nice, Ajaccio, Malaga and Seville. Prices start at €1,739; more from royalcaribbean.ie or your local travel agent.

Liverpool take on West Brom in the fourth round of the FA Cup on January 27th, and Celtic Horizons is offering a day trip. Ferry and coach travel to Anfield, with seats at the stadium and access to the Code Lounge, including half-time drinks, costs from €199 for adults and €179 children. Be prepared, though: it’s a 24-hour trip, leaving early on the Saturday morning and returning overnight, to be back in Ireland in the early hours of Sunday.

Lower fares to the US

Getting to the United States this year could be cheaper if you are prepared to stop over at Reykjavik. The Icelandic airline Wow Air is offering flights to San Francisco until April from €155.99 each way. Could be handy if you’re going to the Coachella music festival that month. Iceland Air is beginning services in May, so expect some competitive fares.

Hotel Westport, in Co Mayo, is waiving its single supplement for five-day stays, starting on selected Sundays, in January, February and March. Prices range from €220 to €280. hotelwestport.ie or 098-25122.