Travel Bag: we check out the deals so you don’t have to 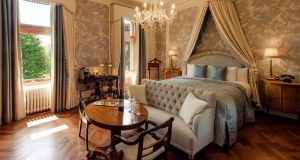 A bedroom in the Cahernane House hotel

Cahernane House hotel in Killarney is undergoing the final stages of a €6.5 million refurbishment. The hotel has already seen the Manor House’s 12 rooms restored, and the Herbert Room restaurant refurbished. There has also been a major refurbishment of all 26 rooms in the Garden Wing, while the Cellar Bar and lobby are set to receive complete makeovers. The final phase will also see an additional 22 bedrooms and more public spaces added to the building, including an orangery. The doors of the four-star fine manor house hotel will be closed throughout January and March to allow for the renovations, but visit cahernane.com for bookings of their big reveal.

The Travel Department has announced a trip to Bulgaria’s Black Sea Coast this May and September, exploring the coastal town of Nessebar with a boat to the rocky island of St Anastasia. Prices start from €749 including seven nights’ four-star half-board hotel accommodation, return flights from Dublin, transfers, excursions and all taxes and charges, with flights departing May and September 2018. See traveldepartment.ie for more.

Mount Juliet’s new on-site hotel, Hunter’s Yard, welcomes guests for a special night away this month. Stay during January and enjoy a cocktail on arrival, breakfast served in The Hound at Hunter’s Yard, late check out and complimentary parking from €169 per room. Located in a former courtyard, the new space is adjacent to Mount Juliet treatment rooms and golf course, perfect for a quiet break away with all the luxury amenities on your doorstep; mountjuliet.ie

Aer Lingus has been ranked amongst the most on-time airlines in the world in a new study conducted by digital flight information provider OAG. The Irish airline was ranked third most punctual airline in Europe, and 10th of all airlines worldwide for 2017. For a full list of results visit oag.com