Where in the world? More than 30 new flight routes from Ireland in 2018

From Hong Kong to Marrakesh, and dozens of destinations in between, where will we be flying this year? 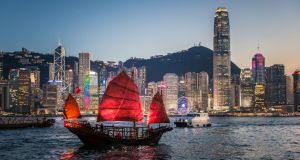 For the first time, passengers will be able to fly direct to China with a Cathay Pacific Dublin to Hong Kong service, which commences in June. The service will run four times a week, year round. Trade, leisure and education links with China have increased in recent years, and there is a strong possibility of China’s fourth largest airline, Hainan Airlines, launching a Dublin to Beijing service later this year.

Dublin Airport will expects to break passenger records in 2018 with 181 cities connected to the country’s main flight hub.

As well as the two new transatlantic routes from Aer Lingus to Philadelphia and Seattle, Air Canada will be operating a four times weekly service to Montreal. Canada will have strong links to Ireland with four airlines flying there from this year. It is expected that Aer Lingus will announce further routes to the United States, as soon as it can acquire new aircraft.

In North Africa, there will be two flights, to Agadir with Air Arabia and a return of Ryanair to Marrakech. Tunisia is not likely to come back this year, but other European countries have reopened flights there.

Cyprus, long a popular destination from Ireland, will see the extension of year-round flights with Cobalt Air to Larnaca, while Ryanair will begin a service to Paphos.

Within Europe, Ryanair will have new routes from Dublin to Munich and Stuttgart and British Airways will operate a weekly service to Manchester from Dublin.

Iceland Air will begin a service from Reykjavik to Dublin six times per week and it will be competition for Wow Air which already operates that route. Both carriers have substantial networks to the US and compete strongly on prices.

Cork
Cork was recently voted the second happiest airport to travel through, based on responses to “smiley” voting feedback in departures. Ryanair will operate extra flights to Barcelona, Girona, Reus, Malaga, Mallorca, Lanzarote, Tenerife, Bordeaux and Carcassonne from Cork this year.

Aer Lingus Regional and Stobart Air will substantially increase capacity from Cork to nine UK regional airports, including Cornwall, and Rennes in France. Manchester will have 18 flights per week. The aim is to carry 339,000 passengers from Cork.

Shannon
Shannon will be playing to its strengths in the transatlantic market, with a new four times a week summer service to Toronto by Air Canada, and increased capacity to Philadelphia. Ryanair will open a Barcelona Reus service in March and is increasing services to Alicante and Mallorca.

Ireland West
In Knock, a new service to Mallorca will enable travellers to avail of package holidays from Ireland West with TUI Holidays. Ryanair has increased capacity on its summer service to Milan by 35 per cent, and also to Alicante. Flybe will be operating more services to Birmingham, Manchester and Edinburgh.

Kerry
Kerry airport will be welcoming more German visitors to the Wild Atlantic Way with a new service beginning with Ryanair from Berlin.

Belfast
In the north, business at Belfast International Airport increased by 13.5 per cent last year. The airport is also seeing strong growth from the Republic with the Sterling exchange rate. Ryanair is launching 14 routes from Belfast for summer 2018, including Berlin and Milan. The airline is reinstating the Belfast to London Stansted route a month earlier than planned, on March 1st.

New routes from Jet2 and Easyjet include Madeira, Valencia, Naples, Isle of Man, and Dalaman in Turkey.

Belfast City airport will have flights to Mallorca with Jet2, Doncaster and the Isle of Man with Flybe.