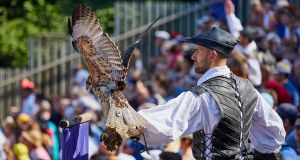 It was nearly 20 years since we had driven to France for a campsite holiday. In the interim we had been spoiled by short-haul flights to airports handily close to campsites in France, Spain and Croatia. Boarding a plane in the morning and being at your destination that afternoon is always attractive, especially if you have young children. There was also that niggling memory of driving on to the ferry home in a frantic lather, just as the ramp was pulled up behind us.

But boarding the Pont Aven – Brittany Ferries’ flagship vessel from Cork to Roscoff – in last summer’s golden sunshine marked the start of a wonderful ferry experience. Our little four-person berth was a holiday highlight, between figuring out where the beds are stowed and staring out the lovely porthole window on to the flat, calm, glistening sea.

While the ferry itself was packed, it had a cruise ship feel – complete with a pool and two cinemas – and we happily sunned ourselves on the deck for a few hours.

For a treat to kick off the holiday, a good tip we followed was to book Le Flora restaurant immediately after boarding. It’s in high demand, and it’s easy to see why. In the elegant dining room, the centrepiece buffet groans under the weight of langoustines, salmon, prawns, cold meats and salads. Add to this a fantastic cheese and dessert selection – again from the buffet – and a generally excited atmosphere, as dolphins and whales cavorted and dived alongside the ship in the evening sun.

Our destination was a six-hour drive from Roscoff to Bonne Anse Plage in the Charente Maritime/Vendée region, near the town of La Palmyre. The big attraction here is the endless stretch of coastal beaches and dunes, flanked by cycle paths. We hadn’t tried a Siblu campsite before and they operate a little differently to the usual campsite operators, in that Siblu manages rentals for individual mobile home owners.

So while all mobile homes are equipped to a uniform standard, they will also feature quirks and improvements added by their owners. Our three-bed home didn’t disappoint. In a good location close to the services – but not too near the entertainment – it had a decent-sized veranda, which is something of a must (when you don’t have one, you really notice it).

French campsites of quality are fairly uniform, with little to distinguish them. Bonne Anse Plage is a nice, manageable size – good for families with smaller children – and the restaurant/entertainment set-up is well done. You could dine in the reasonably priced on-site restaurant, and because the stage was right beside it, it wasn’t a traipse to another part of the campsite for the “animation” – the evening shows that are a feature of every campsite, which children love and parents ... Well, parents go along too.

We hired bikes on day one, which meant the car didn’t move for the rest of the week. Cycle paths run the length of the coastal area, so you could visit a different stretch of beach every day if you wanted. In the evening, La Palmyre was only a 10-minute cycle. It has a great zoo that’s well worth a visit for an up close animal experience.

After a week of sun, sea and endless Vendée beaches, we moved to the next leg of our travels, and probably the highlight of any French holiday we have ever been on. Puy du Fou is a historic theme park, the second most popular theme park in France after Eurodisney. It also seems to be France’s best-kept secret, even though it attracts two million people every year. Whether they are trying to keep Les Rosbifs and the rest of the EU from sharing this spectacular park is unclear, but it is about an hour and half north of La Rochelle and close to ... well, very little.

This may be a theme park, but in the loosest sense imaginable. There are no rides, simply experiences from history. It was originally an incredible medieval falconry display, before a further series of purpose-built arenas were developed to showcase and re-enact moments from history. The Colosseum complete with full-on chariot racing, lions and gladiators is an absolute highlight. So too is a reprise of a Viking landing, where a longboat emerges (incredibly) from under water and mayhem ensues. King Arthur and the Knights of the Round Table (rising from the deep also) are re-enacted elsewhere, and the story of Joan of Arc is cleverly weaved into a display of horsemanship and jousting.

There are also immersive experiences walking through the trenches of the first World War. And aboard one of the great expeditions on the high seas in a leaky creaky tall ship.

We took two days at Puy du Fou, and stayed overnight in one of the many themed accommodations. Ours was a cosy “medieval” wood cabin on stilts above the water. Other options include yurts and an Italian Renaissance villas. Similarly, there are many themed restaurants dotted around the site, serving up good, well-priced fare. The tickets are also reasonable, given the amount of entertainment on offer.

If you can manage an overnight stay in summer, it is well worth attending the nighttime show, Cine Spectaculaire. Featuring 2,000 actors – many of them local volunteers – set against a medieval backdrop in an outdoor arena, it has to be seen to be believed. This whistle-stop tour through French history is an incredible spectacle, incorporating singing, dancing, hundreds of animals and one of the most impressive fireworks displays you are ever likely to see. If you find yourself remotely close to Puy du Fou, make the effort to go – you won’t be disappointed.

A driving holiday in France can seem in the planning like a lot of hassle and to-ing and fro-ing, but once on the road, and if you’re not too tied to deadlines, it can be a great adventure that will live far longer in the memory than a holiday spent poolside in one location. And the wine travels very well too.

Getting there
Brittany Ferries: Pont-Aven from Cork to Roscoff takes about 14 hours. Sailings start from €132pp return, based on four sharing. brittanyferries.ie, 021-4277801.

Don’t miss: Puy du Fou
Two-day tickets to Puy du Fou theme park cost about €60 for an adult and €43 for a child. The Cinéscénie evening show is extra, tickets €28. Or a two-day, one-night package for two adults and two children at the medieval village including Cinéscénie costs about €560 in July.

Covid-19: How Northern Ireland has fared better than the Republic of Ireland
Real news has value SUBSCRIBE