The abbey itself seems alive as it merges with the landscape, adding to the ambiance 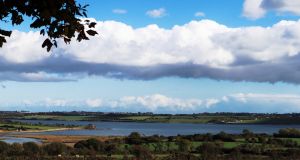 I still remember the shock of first seeing Whitby Abbey in Yorkshire. There was this magnificent ruin standing in a closely mown large green field.

I love old ruins, but my experience of them in Ireland is of ivy-covered walls surrounded by all kinds of weeds, headstones lying askew with barely readable script. I felt that ruins, rightly, should be metabolising back into the natural landscape. This building, impressive though it was, with its green lawn and pristine walls, didn’t have the atmosphere of a modern barn.

So I approached Tintern Abbey with trepidation and got exactly the same feeling. Large car park, steam-washed walls, security fencing and looking the same as any other abandoned abbey.

I once asked an old monk why there so many abandoned abbeys scattered around these islands. Expecting an historical lecture, I was taken aback when, with a twinkle in his eye, he gave a hilariously scandalous reply. This being a family newspaper, I cannot repeat it, but if you ever bump into me on the hills, I will tell you.

Why was I here, you might ask? I had come not to see Tintern Abbey but to savour it. There is great pleasure to be had in wandering through the woodlands, gardens and lakes the monks had created around their holy edifice.

And as you wander the trails through the grounds, you get differing perspectives of the abbey as it rises above the autumn-tinted trees.

Sometimes just the tip of the castellated tower, sometimes a wall of Gothic windows or the magnificent Chancel Window. And then the abbey appears alive as it emerges from or merges with the natural landscape, all the while adding character to the ambiance of the walk.

And even as you walk further there is always a hint of it somewhere on the skyline or amidst the vegetation.

The initial part of the walk is along the driveway leading to the abbey. It passes through wide pasture land enclosed by trees before emerging into the large car park under the walls of the abbey.

Averting my eyes, I followed the path that leads down to a castellated bridge across the creek, leading up from Bannow Bay. Crossing the bridge, you gain access to a trail that leads down to Saltmills. Great banks of deciduous trees line the upper slopes of the inlet while rich pasture runs down to the water.

Arriving at Saltmills you come to Bannow Harbour, where the Normans landed in 1169. It was a pleasant walk along the road beside the bay, the tide was flooding but there was still enough of the mudflats exposed to reveal their role as a habitat for large numbers of waders and wildfowl.

The road turns inland and up a leafy lane which leads back to a trail that brings you down to the bridge.

After a quick look, around the magnificent walled garden which deserved more time, I took the trail beside the stream bounded by beech, oak, which brought me back to the car park.

Start and Finish: The car park for walkers, a short distance inside the entrance to Tintern Abbey. How to get there: Head south of the N25 from Wexford Bridge. Take first right on to R733, continuing on it through Arthurstown and Ramsgrange. Five kms further on, Tintern Abbey is signposted to the right. Time: Three hours Distance: 8km Total Ascent: 150m Suitability: Easy Food and Accommodation: Wexford, Saltmills, Arthurstown Map: Ordnance Survey, Discovery Series, Sheet 76 Grid Reference: 798 108