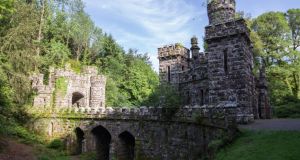 Lismore, Co Waterford: Situated close to the river Blackwater, Lismore is a charming and historical town with a wealth of heritage to discover 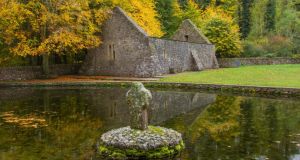 St Patrick’s Well: Tipperary is blessed with an abundance of spectacular medieval sites 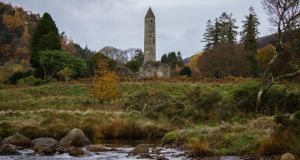 A round practically every corner in Ireland’s Ancient East you can discover fascinating echoes of the past. This region holds some of the world’s finest examples of prehistoric ingenuity, a wealth of early Christian monasteries, massive medieval castles and sprawling abbeys, and great landed estates. A new guidebook by archaeologist Neil Jackman helps people to discover 100 incredible places, with directions and maps to help you explore the story of Ireland. Here, Jackman gives 10 of his personal favourites that all make for a great day out.

Hidden away in the rolling countryside of Co Louth, you can find Castleroche castle, arguably the finest example of a 13th-century castle in Ireland, and the only one of its period to have been constructed by a woman. It was commissioned by Lady Rohesia de Verdun in 1236 to serve as a bastion of defence for the Anglo-Norman colony in Louth against the Gaelic tribes of Ulster. Lady Rohesia was a formidable individual: legend has it that she had the castle’s architect thrown from one of the tower windows so that he could never reveal its secrets.

The Boyne valley in Co Meath is packed with an almost bewildering array of ancient tombs and monuments, perhaps most famously the great tombs of Newgrange, Knowth and Dowth, all accessible through the superb Brú na Bóinne visitor centre. Located to the north of the Boyne valley, near the village of Oldcastle, the passage tomb cemetery of Loughcrew is one of my favourite sites in Ireland. The Irish name of Loughcrew – Sliabh na Caillí – translates to “The Hill of the Witch.” Folklore has it that the monuments at Loughcrew were formed when a witch called An Cailleach Bhéara was challenged to drop an apron full of stones on each of the three Loughcrew peaks: if she succeeded she would be proclaimed the ruler of all Ireland. She was successful on the first two peaks, but missed the third and fell to her death. The largest of the tombs, Cairn T, stands on the summit of Carnbane East and may be the focal point of the whole cemetery. This passage tomb has some of the finest examples of Neolithic art in Ireland. Visit during the autumn or spring equinox to witness sunlight entering the chamber to illuminate the inside of the tomb.

A spectacular blend of natural scenery and built heritage, Glendalough is rightly one of the best-known of Ireland’s historical sites. The name Glendalough comes from the Irish Gleann Dá Loch, or “Valley of the Two Lakes”. The monastery was founded by St Kevin. It boasts a number of important monastic buildings, including churches, a cathedral and a round tower, but many people overlook one of its more unusual treasures, the field known as Seven Fonts, where you can find a remarkable collection of bullaun stones dotted throughout the field and in the adjacent river. “Bullaun” comes from the Gaelic word for bowl. These hollowed stones are found at a number of sites around Ireland, often in association with early medieval church sites. They may have been holy water fonts or served a more practical role such as a large mortar for crushing herbs or minerals.

Castletown House in Celbridge is one of Ireland’s most spectacular landed estates. Once the palatial residence of William Conolly, it contains 100 rooms and is set in 120 acres of beautiful landscaped grounds stretching down to the river Liffey. Its scale alone, quite apart from its design, makes it hugely impressive. As one 18th-century commentator remarked: “This I believe to be the only house in Ireland to which the term ‘palace’ can be applied.” After Conolly died in 1729, his widow Katherine continued to live in the house and commissioned a number of spectacular follies (like the nearby Wonderful Barn and Conolly Folly) to keep local people employed during periods of hardship. Today Castletown and the historic village of Celbridge are wonderful places to explore.

Clonmacnoise is one of Ireland’s most iconic historical sites. The monastery was founded by St Ciarán in the middle of the sixth century. Though today it seems peaceful and somewhat isolated, in the early medieval period Clonmacnoise was at the crossroads of the two major routeways of Ireland: the mighty river Shannon and the Slí Mór (meaning “The Great Way’). At its height the monastery was surrounded by a large bustling settlement, with markets, craftsmen, labourers and farmworkers. Today, it is a truly beautiful and peaceful place to encounter early medieval Ireland. Quite close to Clonmacnoise, you can discover more wonders from the early Irish church. St Manchán, a monk from Clonmacnoise, founded another monastery nearby at Lemanaghan. His shrine, one of the most breathtaking examples of medieval art, is still on display in the nearby parish church at Boher.

6. The Rock of Dunamase, Co Laois

The Rock of Dunamase is dramatically perched on top of a steep limestone outcrop that towers above the low-lying plains of Laois. Dunamase was part of the dowry paid by the king of Leinster, Diarmait Mac Murchada, when his daughter Aoife married Richard de Clare (Strongbow), the leader of the Norman invasions. He appointed Meiler FitzHenry to hold the castle, which was on the dangerous and unsettled borderland with powerful Gaelic Irish tribes. Later, the famous knight William Marshal continued the work begun by FitzHenry, and transformed Dunamase into a truly formidable fortress. The Rock of Dunamase was finally captured by the Ó Mordhas in 1330, but they left the site unoccupied and it fell into ruin. Today you can explore it and enjoy spectacular views over the lush landscape of Laois.

Lough Gur is one of the most important and remarkable archaeological landscapes in Ireland. This small, horseshoe-shaped lake has been a focal point for settlement and activity for millennia, beginning in the Neolithic period. Folklore and mythology abound here, with legends of a lost city beneath its calm, enchanted waters. The island near the eastern shore is named Garrett Island after the third Earl of Desmond, Gerald (or Garrett) Fitzgerald. He disappeared in 1398 and legend says he is doomed to live under the lake. He emerges fully armed and dressed in his finery at daybreak one day every seven years, mounted on a phantom white horse. He rides across the lake and leads a fairy host. He is compelled to repeat this until his horse’s silver shoes wear away.

Situated close to the river Blackwater, Lismore is a charming and historical town with a wealth of heritage to discover, including the castle with its lovely gardens, St Carthage’s Cathedral and a superb heritage centre. Just outside the town you can find the Towers of Ballysaggartmore. The towers were commissioned by Arthur Kiely-Ussher around 1835. It is said that his wife had become deeply envious of Strancally Castle, built by Arthur’s brother John Kiely, and hectored Arthur to build a residence to outshine that of his brother. Plans for an extravagant mansion were drawn up and work began on the long and winding carriageway, with an ornate gate lodge and bridge. However, their ambitions quickly outstripped their funds. A newspaper account at the time derided their extravagance: “the crowning folly of them all, at Ballysaggartmore in Waterford, huge gates, then an even larger bridge, then for economy a smaller bridge and then at last no house, for there was no more money, the derelict demesne lies heavily overgrown, enclosed and silent ...” Today it is a wonderful and unusual setting for a walk.

Kilkenny city itself is a treasure-trove of medieval heritage, and the county is full of wonderful places to see; of these Kells Priory is perhaps my favourite. This enormous site has the appearance of a large castle, with high walls and strong towers, but despite its military appearance it was a monastic foundation, founded by the Norman knight Geoffrey FitzRobert circa 1193 for the Augustinian canons. A number of other fascinating sites like Kilree (with its fine round tower and high cross), Jerpoint Abbey, Newtown Jerpoint, and Kilfane Church (with its remarkable eight-foot tall effigy) are all nearby, making for a wonderful day soaked in the majesty of Kilkenny’s medieval marvels.

Tipperary is blessed with an abundance of spectacular medieval sites. The most famous of these is undoubtedly the Rock of Cashel; however for my list I’m going to be unashamedly biased and include St Patrick’s Well, located just outside my adopted home town of Clonmel. Holy wells are sacred places where natural springs or man-made hollows that collect water are thought to have a religious significance because of their association with a saint. Many are thought to have been places of pre-Christian worship and tradition that were co-opted as Christian sites following the conversion of the local population. If you visit this spiritual and tranquil spot it is easy to see why it was chosen as a place of worship, as there is a clear connection between the natural and sacred world at this site.

Ireland’s Ancient East – A Guide to its Historic Treasures by Neil Jackman is published by The Collins Press, price €17.99. It is available in good bookshops and at collinspress.ie