Time’s up for idling car engines

One Change: CO2 emissions could be greatly reduced if drivers avoided idling for just a couple minutes a day 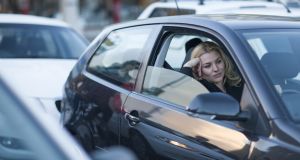 Ireland had the third highest greenhouse gas emissions in the EU in 2019, with transport and agriculture accounting for the lion’s share of harmful emissions. Photograph: Getty Images

With every passing month the issues highlighted in this column appear to be more mainstream. A reader suggested that we focus on the pollution caused by engines left idling when cars are parked. I felt this might be too niche, or that urging people to switch off their engines could seem nannyish.

Yet now I read in this paper (irishtimes.com/news/education/dozens-of-schools-to-introduce-no-idling-zones-under-campaign-to-tackle-air-pollution-1.4416178) that “dozens of schools” have introduced “no idling” zones as part of a campaign aimed at combating air pollution caused by cars left running when dropping off and collecting children at school gates.

It has been estimated that CO2 emissions could be reduced by 1.4 million tonnes annually if drivers avoided idling for just three minutes per day. This would be the equivalent of taking 320,000 cars off the road. All it requires is the introduction of an awareness campaign backed by enforceable penalties.

But, in the meantime we can make a difference by implementing it in our own lives, and by encouraging people to sign a petition (chng.it/RVqT2JK655) that calls on “the Department of the Environment, Climate and Communications to introduce laws and an awareness campaign to tackle engine idling, as part of the nation’s efforts to tackle emissions in line with its 2050 climate goals”.

In some way, it can seem like a small thing, and I realise that in many parts of rural Ireland men of a certain age appear to find solace in hearing the sound of their pick-up, tractor or truck running while having a chat, we just need to find a way to politely tell them that not only are they contributing to increased CO2 emissions, but they are polluting the air they breathe. Air pollution causes almost 500,000 avoidable early deaths in the EU each year, according to the European Environment Agency. And because more than 60 per cent of Irish cars are diesel, compared to just 3 per cent of US cars, the human and planetary impacts of our cars are greater than elsewhere.

People think that turning off and restarting their engine uses more carbon, but research by numerous bodies, including the US department of energy, has shown that idling for any more than 10 seconds uses more fuel and produces more CO2 emissions.

Tom Spencer, editor of an online guide to electric cars, irishevs.com is adamant that private and commercial drivers need to be educated about idling. “The recent mile-long tailbacks at McDonald’s drive-throughs before and after the first lockdown shows urgent need for greater awareness around this issue, and the impact that it can have on public health and the environment. Anti-idling laws are the norm in much of the world. It makes sense; for example, if the 10,000 buses in this country cut their engines when stopped they could save 40 tonnes of air pollution annually.”

Of all the One Changes we’ve suggested over the past 18 months, this might be the simplest and one of the most impactful, as Ireland had the third highest greenhouse gas emissions in the EU in 2019, with transport and agriculture accounting for the lion’s share of harmful emissions.

Starting today we can begin addressing this by simply switching off.