‘Are you living your dreams through us?’ my daughter asked

I may be a momager but I am a rubbish one 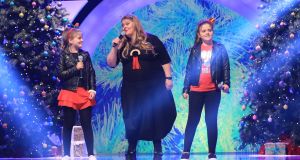 Last August, on a sweltering hot day, I found myself on a stage with my daughters in an RTÉ studio pretending it was Christmas. It was one of those moments in life where you ask yourself: how did I get here?

It wasn’t a difficult question to answer at a surface level. What happened was a nice woman from a television production company rang me up and asked if I’d take part in a Christmas “celebrity” version of the children’s programme Donncha’s Two Talented.

Donncha is sports legend Donncha O’Callaghan who has seamlessly made a transition from the rugby field to children’s television presenting. He’s now the host of this charming show where talented children act as mentors persuading reluctant parents to perform a song or a dance with them. It’s not a competition. There are no judges. It’s pure, heartwarming entertainment.

When the call came, I quickly decided to ignore the fact that (a) I am not a “celebrity” and (b) I have never exactly been what you might describe as “reluctant” to make a show of myself in any given discipline.

My two 11-year-old daughters were almost as keen to take part as I was. We rehearsed a Christmas song and performed it out in RTÉ several months before Christmas, as is so often the way in television land. The whole experience was a wonderful pandemic distraction from start to finish. It’s only now that it’s about to actually be on the telly that I am getting a fit of the collywobbles.

How did I really get here? That takes a bit more unpicking. It might have been watching The Late Late Toy Show as a small child and burning up with resentment that I’d never be one of those Billy Barry kids. Perhaps it was singing in all those talent shows as a young one during Sandymount Community Week when I was always placed second or third but never landed the big prize.

It might have been the time I was supposed to star in a student film as a teenager but then got fired by phone for not having an authentic enough Dublin accent. A few years later, I passed the assessment stage for a drama degree but then didn’t bother studying enough for the Leaving Certificate to earn enough points for admission.

All that rejection and thwarted showbiz ambition. Could it possibly have anything to do with me pushing my children from an early age towards music, singing and acting?

“Do you ever think you are living your dreams through us?” one of my annoyingly perceptive daughters asked me recently. “I mean I don’t mind if you are, I just wondered.” “You’re a momager,” a friend slagged me when I told him about the upcoming TV thing. “A stage mother. Own it.”

It’s true that from an early age I’ve had the girls in music, speech, drama and dance lessons. But if I’m a momager, a la Kris Jenner, I’m a rubbish one. I regularly forget to reply to emails about auditions and when I do I’m a demon for not reading the instructions properly.

And, ladies and gentlemen of the jury, you will please note in my defence that none of this singing and acting and music would be happening at all if my children didn’t enjoy it. They may grumble about practice and Zoom lessons but they are passionate about learning their poems and monologues for their speech exams and about all the singing in public.

When I moan about how much the tuition costs they beg me to keep paying. That sound you hear is me, resting my case.

Watching them, their frosty breath evaporating in the air like the nerves they’d complained of at home earlier, I marvelled at their composure

The other day a neighbour sent me a text. She’d heard the girls like to sing and asked would they take part in a Christmas video for our local community garden, Mud Island, in Dublin’s North Strand. The girls were delighted and did a quick rehearsal, deciding to reprise their cover of Linger by The Cranberries that the three of us rewrote in early lockdown to reflect these pandemic times.

“We wish, wish we could return, wish we never had to learn, words like Covid-19, coronavirus you’re so mean …” is the opening line.

Their dad and I walked them down the road to Mud Island on a crisp, winter’s night, where they filmed three songs. Watching them, their frosty breath evaporating in the air like the nerves they’d complained of at home earlier, I marvelled at their composure. “Smile, girls,” I encouraged them, standing as close as possible to the action. “Make sure you smile.”

After the first take the children shouted at me to go away, banishing me to another part of the garden where I could no longer see them perform.

I stood, freezing from a distance, while they sang about how “a virtual Christmas day” was “a tiny price to pay” for keeping people safe these days. Afterwards, the director said, a bit unnecessarily, that they did a much better vocal without me standing gurning at them.

When my children were born, an old friend brought a framed poem by Kahlil Gibran into Holles Street as a gift. “Your children are not your children,” Gibran advised. “You may strive to be like them but not to make them like you,” he suggested. One day, a good few years ago, the framed poem fell off the wall and the glass shattered. We never put it back up. Maybe that’s how I got here.

All I know is that, when he wrote his poem, Kahlil Gibran had never seen the faces of grown men light up because his children were singing a pandemic version of Linger by The Cranberries in a fairy-light festooned, inner-city community garden.

And anyway, Mr Gibran, my children will thank me for all of this one day.

I am nearly sure of it.