Life after cancer: ‘I felt as if I had been attacked by cancer’

Cancer can be cured, but it can leave a person feeling bruised and battered emotionally 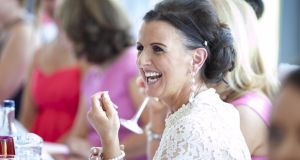 Yvonne Joyce, who had breast cancer, at the Ladies Lunch in aid of the Marie Keating Foundation. Photograph: Chris Bellew/ Fennell Photography

Cancer had never been an issue for Yvonne Joyce. She obviously knew it was very common but none of her family or close friends had ever experienced it, so it wasn’t something she ever thought about – until October 2009.

It was just before Halloween when she felt a tiny lump in her right breast. She wasn’t unduly concerned and only mentioned it to her husband, Niall, as she was sure he would be equally unfazed by it.

Luckily for the Dublin woman, he told her to check it out and, as a result, she was treated for cancer before it got worse.

“I felt a little lump which was so easy to ignore,” she recalls. “I asked Niall to feel it as I thought he would agree that it was nothing to be worried about, but he said I should go to the doctor, which I did.

“The GP also thought it was nothing but, to be on the safe side, she sent me to have a mammogram and ultrasound done the following day. I still thought there was nothing wrong and it was only when I saw the shading on the ultrasound that I realised I was in trouble.”

After discovering cancerous cells in her breast tissues, Joyce’s medical team ordered a series of tests to ensure the disease hadn’t spread to the rest of her body. Thankfully, it had been contained and after a lumpectomy, chemotherapy and radiotherapy, she had finished her treatment three months after she first discovered the minute lump.

It was a difficult process but the mother-of-three didn’t allow herself to dwell on any emotions, even when she started losing her hair.

“All through diagnosis and treatment, I was so determined to survive that I just got on with things, not really allowing myself time to think,” she says. “I have always liked my glamour but when my hair started to fall out, I realised that I had bigger things to worry about and decided to go and get it shaved and be done with it.

“Initially I didn’t want Niall to come with me as I thought I would be better off doing it alone. But at the last minute I changed my mind and I’m so glad that I did because he was part of the process and, despite seeing me at my worst, said some lovely things and really supported me through it all.”

Once her treatment was over and her hair gradually started to grow back, the worst of the physical suffering was over. In the eyes of the world, her cancer had been cured, but the emotional scars ran a lot deeper and Yvonne, who writes a column for the Kerryman newspaper, took a long time to recover from the mental impact of what she had been through.

“I was offered counselling while I was going through treatment but I felt that I didn’t need it,” she says. “I talked a lot to friends and family so I thought this was enough, but it wasn’t until a few months later that I started ask why cancer had picked on me. I began to feel angry that it had happened to me as I hadn’t done anything to bring it on.

“I lost confidence in myself and began to have panic attacks; I even had to stop singing in the gospel choir – something I had always loved – for a while as I just couldn’t cope. I felt battered by emotions and I really wasn’t right for about two years.

“And even though I hadn’t needed a full mastectomy, I still felt disgusted with my body and how it looked after the lumpectomy. I felt as if I had been attacked by cancer.”

Coming to terms with her new physical state was difficult for Yvonne who also went into an early menopause.

“My body had changed physically with the lumpectomy and then, to make matters worse, I went through the menopause early. It was as if the cancer was telling me that I was finished as a woman,” she says. “This hit me really hard and, although I was still young, I felt as if I was no longer a sexual being.

“So I decided to try to change things and booked a week away for myself and Niall. This was a really positive step as it brought us closer together and made me realise that I was still alive in that respect. This in turn made me feel more confident and determined to get back on track.”

Revitalised by her short break, Yvonne decided to volunteer for the Marie Keating Foundation as she believes it is vital for people to talk about surviving cancer and realise that they are not alone in their feelings of despair.

“A lot of people survive cancer physically but they can often be nervous wrecks after the ordeal,” she says. “I got over the emotional impact by getting involved with the Marie Keating Foundation and talking to other women who were going through the same thing.

“It is so important for people to talk because it will help them to get their confidence back little by little. They may not realise at the time, but they will recover emotionally and be able to laugh at the little things in life again.

“When you are diagnosed with cancer you start to think that the world doesn’t make sense because it was never meant to happen to you.

“Once the treatment is over, I would advise all survivors to talk to someone about the emotional scars as they also need to be healed.”

Breast cancer: the news is good

Domini Kemp: ‘When you are told you have cancer'

Irish breast cancer research centre to be first of its kind

Snacks that won’t slow you down
The Health Centre Go back to the main page
Disclaimer: The information contained in these pages is for reference only and is not intended to be a substitute for medical advice. If you have any concerns about your own health, or that of someone close to you, please consult your doctor.