‘Your resolution was to become part of the Irish coaching staff. How did you get on?’ 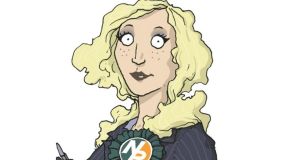 “It’s an amazing way of celebrating our Irishness in this period of historic centenaries,” claims Sorcha

I’ve been tackled in my time by 250lb of prime Newbridge College beef. I’ve had my eyes gouged, my testicles twisted and my head trod upon more times than a man who failed pass maths in the Leaving Cert could ever possibly count. I’ve been spear-tackled, stiff-ormed and punched in the face. I’ve had nine concussions, three broken orms and one hip replacement operation.

And yet I can honestly say that there is no more terrifying vision in the world than my wife coming at me with a pen and an A4 pad – especially during that period between Stephen Zuzz Day and New Year’s Eve.

Making lists is one of the great joys of Sorcha’s life. But the kind of lists that she enjoys making usually involve work for everyone within earshot of her. Which is why me and Honor have developed a special signal that we use when one of us happens to hear her opening the stationery drawer in the week following Christmas. It basically involves one of us shouting, “Run! Hide!”

While me and Honor have had our differences over the years, this arrangement has worked well, since it’s based on what my daughter calls “our mutual self-interest”.

Occasionally, though, we make the mistake of letting our gord down? Yeah, no, like this morning. The two of us are sitting there stuffing our faces with Quality Street while watching videos on YouTube of celebrities seriously injuring themselves. And that’s when Sorcha walks into the room.

“Oh my God,” she goes, “is that Beyonce with her hair caught in an electric fan?”

Me and Honor immediately stop laughing because we spot the 250-page Pukka in her hand.

Honor stands up, puts her face in her hands and goes, “Yes. And I’m so upset that I think I need to be alone.”

I’m there, “I’ll come with you. Poor Beyonce. I’m a bit teary myself.”

But Sorcha sees straight through it. She goes, “Sit down, both of you! We’re going to make our New Year’s resolutions!”

We both realise that resistance is pointless so we end up doing what we’re basically told.

“Okay, first,” Sorcha goes, “I thought it might be fun to look back on the resolutions we made this time last year to see how we all got on! Okay, mine were, one, to increase by 10 percent all of my Direct Debits to the various charities I contribute to, which I actually did from the first day of January! Two, to maintain the platinum status of my Brown Thomas loyalty cord, in which endeavour I was successful, too! And, three, to graduate to the Advanced level in Reformer Pilates, which – oh my God! – I also achieved!”

She looks at me, then at Honor, then back at me again, grinning like – what’s the phrase? – a cheddar cat? I realize she’s waiting for one of us to say something.

Mount Anville girls are like Leap Cords. They have to be validated.

Sorcha’s there, “Okay, let’s look back at your resolutions now. Ross, you only had one. That was to become an integral port of the Irish coaching set-up. How did you get on with that?”

“Focking great,” I go. “As a matter of fact, you’ll have to excuse me – Joe Schmidt is calling around in 15 minutes and I haven’t picked the team for Paris yet.”

“Okay,” she goes, “there’s no need for sorcasm. What about you, Honor? Let’s see what you wrote down. You promised to stop using foul and abusive language towards me and your father.”

“Yeah, that was more your idea? You pair of saps.”

“Then you promised to tidy your room before the cleaner got here every week.”

“Er, that’s Lyudmila’s job. If I did that, I’d feel like I was taking bread from the mouths of her children.”

“Then you promised to stop trolling Niall Horan on Twitter.”

“Yeah, he blocked me. So now I’m trolling Danny O’Donoghue instead.”

“Okay, well, I suppose that’s kind of keeping your resolution. Overall, though, I think you two will be very disappointed with how 2017 went in terms of, like, trying to be The Best You.”

I’m there, “I think we already said fair focks to you, Sorcha.”

“I’m just making the point that that was, like, the third year in a row where you two have made New Year’s resolutions, then failed to follow through on them.”

“Yeah,” Honor goes, “once a Head Girl, always a Head Girl. Can we go back to watching this video? I want to see do they have to cut Beyonce’s hair.”

Sorcha goes, “I was thinking this year we could make, like, a family resolution – as in, one promise that we all agree to abide by for the whole of 2018.”

Me and Honor look at each other. The woman has obviously got something in mind.

I’m there, “What?” with a sense of definite dread.

She goes, “Well, do you remember Muadnait? We were, like, really good friends in UCD.”

Muadnait? Seriously, where do they get these names? It’s like they take a word search puzzle, put a circle around eight letters and go, ‘Yeah, no, let’s call her that – except spell it backwards.”

I’m there, “I don’t recognize the name,” because I tend not to remember the friends of Sorcha’s who I didn’t get off with?

She goes, “You do know her, Ross. She has those three lovely little boys – Horper, Atticus and Boo!”

“Those kids are knobs,” Honor goes.

“They’re not knobs, Honor. They’re just very well behaved children who are grateful for everything they receive and who never give cheek to their parents.”

“Anyway,” Sorcha goes, “Muadnait told me that last year their resolution was to make Irish the first language of their home!”

I’m like, “And that’s what you’re suggesting we do?”

“It’s an amazing way of celebrating our Irishness in this period of historic centenaries.”

Honor goes, “You’re the only one in this house who speaks any-,” and she suddenly stops. And our eyes meet and we smile at the thought of living in a house where Sorcha can talk to us all day without us understanding a single word of what she’s saying.

Takeaway kebab at home: this chicken shish is delish
8