We asked, you told us. It’s the little things that bring the biggest smiles #IrishTimesHappy 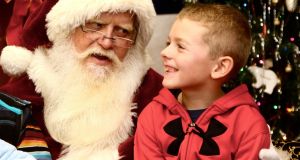 #IrishTimesHappy Tonight's carol concert where my eight year old sang her heart out. Two Christmases ago I was in the throes of chemo. So very glad to be here to enjoy it all.

My first walk to work from my brand new home #IrishTimesHappy

#IrishTimesHappy David and I will be celebrating our anniversary, our daughter turns one on the 23rd and we’ve just spent the weekend surrounded by friends & family celebrating love, life and health. Tweeting this with my daughter asleep in my arms 💖 happy doesn’t cover it!

Hugs Roisin. What's making me #irishtimeshappy is this man making my daughter so happy in Our Ladys Hosp earlier (& she's home today!) 😍💕🎄🤗 pic.twitter.com/SpLASXelmr

My sister just sent me a picture of her at her wedding dress fitting! First time I’ve seen it, can’t wait for her big day!#IrishTimesHappy

Spotted this and it made me #IrishTimesHappy .... New family tradition me thinks pic.twitter.com/2uANjbUDCq

Listening to @SarahMillican75 on @StandardIssueUK podcast talking about her book and generally not giving a crap about what other people think she (and women in general) should be makes me #IrishTimesHappy https://t.co/dZudBJB5gM

Having a nostalgic read of these Santa letters which himself brought home from the office when he retired. #IrishTimesHappy # Christmas pic.twitter.com/1Amro0g9g8

What things, big and small, are making you happy this week? Email happy@irishtimes.com or use #IrishTimesHappy on Twitter