Cycle of life with a difference in inner city Dublin

A Dublin project lets teenagers fix and build their own bikes, giving them not only mechanical skills but life skills 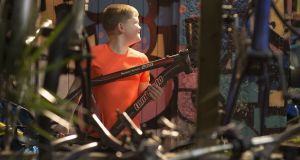 At the entrance to Bradog Youth Service I step out of the way of a child on an oversized bike. “Sorry!” he says as he nearly collides with the door.

“Where’d you get that?” asks youth worker Mandy Shaw.

They have to be careful, Shaw tells me later. “Occasionally kids turn up with stolen bikes, and that’s the type of thing we’re trying to keep them away from.”

I’m visiting the Bradog Bike Project in Dublin 1 where every Thursday teenagers fix bikes or build new ones using a stock of donated parts.

Shaw has been running this project for the past two years with the help of lead bike mechanic Barry Semple.

The project was started originally five years ago by a youth worker called Ray Corcoran (known as Sparky) who now works in a youth centre in Poppintree. “It started because Sparky helped some young person fix a puncture,” says Semple, “And then someone said ‘could you fix mine as well?’ He realised there was a real need for it.”

Semple was at the time involved with a bike workshop at the experimental social space Social Spraoi. “And I worked in a bike shop for a few years, and part of my job was a build-a-bike programme [in schools]. I always thought it was a shame it was only six weeks long.”

The bike project’s programme officially runs for seven weeks but they encourage participants to keep coming beyond that. Though the catchment area is Dublin 1 and Dublin 7, kids come from as far as Finglas. “We’d never refuse a young person,” says Shaw.

In the room where the workshops take place there’s a bright mural, anti-bullying posters, a pool table and a kitchenette with a pot of spaghetti Bolognese on the hob. “Some of them,” says Shaw, “wouldn’t be getting food at home.”

There’s a junior group for under 15s and then a senior group, and before each session young people wander in and start fetching bikes labelled with their names from a yard filled with bike parts. One newcomer complains about dirtying his hands. “They’re such prima donnas,” says Shaw.

The project is funded by the Irish Youth Foundation and Bradog Youth Service. Some local councillors gave them access to a disused flat on Dominic Street, where they store a lot of the bikes. Gardaí also drop in from time to time, and the project has a close relationship with a couple of bike shops who give them supplies. “There’s a whole ecosystem,” says Semple.

A young asylum-seeker from Albania, Handi, is assisting 11-year-old Andrew Tran, who comes from Finglas. “This is the third bike I’ve built,” says Andrew. “I don’t need another one. I just like building them. I’ll give this one to my mother.”

Ten-year-old Cameron Ivory is crouched down beside an even smaller boy called Jack who is wearing a school uniform. “That’s good enough there, Jack,” he says after screwing in a nut.

“If I get the chain on and the wheels on, am I done?” asks Jack

“No, it’s a lot more complicated than that,” says Cameron. “Do you want to grab a saddle?”

Jack wanders out to the yard to find a saddle. “Last week [a youth worker] said I might be a junior leader,” says Cameron proudly. “She says she sees leader potential in me.”

Bikes are a symbol of freedom for young people. They’re affordable (and if you come to the bike workshop and build one, they’re free) and citizens of Dublin have become accustomed to seeing groups of teenagers navigating the inner city balanced on one wheel.

“I’m the best at wheelies,” says 15-year-old John Kavanagh, on my second visit to the project.

“Look at this,” says John, by way of proving his point. He balances his can of energy drink on its edge in a wheely-style. “See.”

I tell Calvin I recently saw a guy wheelying the length of the North Strand.

“That was probably me,” he says confidently.

“You sometimes see lads with no front wheel on the bike,” says Semple, and he laughs. “There should be a wheely championships, really.”

“Some would be at very high risk of crime,” she says. “Some would be coming from deprivation and poverty, and this gives them something positive to focus on… You can see them sit back sometimes and go, ‘Wow, I built that bike’.”

It’s a busy place. There’s a constant refrain of, “Barry, could you help with this?”

“There’s an element of a managed chaos to it all that I like,” says Semple. “Sometimes it’s the right thing to do to hit something with a hammer and that’s kind of cool when you’re 10.”

There’s some good-natured bickering. 15-year-old Robin Comiskey has found a “very good” saddle, which she carefully hides at the end of each session . “It’s too good,” she says.

Two boys argue. “He took my spanner!” says one boy.

“There are loads of spanners,” says Semple. “It’s grand.”

Over the course of the evening one duo seems the most intensely focused. Martin , aged 11, and Bosco (real name Patrick), aged 12, have moved on from building mountain bikes to fixing up 1980s racers. Bosco can barely get up on his.

“Martin has a bike trailer and a yoke with an arm that attaches to his saddle ,” says Semple. “Bosco stands on the back.”

What’s the trailer for?

What do you do with the scrap?

“If it’s wire you peel it and you take it to the scrap yard and you get money for it,” says Bosco.

“Martin and Bosco are amazing,” says Semple. “You’ll see them cycling with the bike trailer around town…I saw them on Capel Street. There were no tyres on the trailer. I told them to come in here to put tyres on the thing…The bike project is really good for them.”

How so? He thinks for a moment.

“The Men’s Sheds people say men are better talking shoulder-to-shoulder than face-to-face. The idea is that as you’re working on a project together you might talk about your feelings.... The same thing happens here. The kids talk to me about how they’re getting on in school or at home. The bike mechanics are secondary to them being engaged in something and building up trust with us and each other, and having a safe space to work.”

He talks about the health and fitness benefits, the personal development benefits, the benefits to the environment (“This is recycling”). Similar project are operating now in a number of different youth centres around the country.

“For some of these kids,” says Shaw, “this might be the only positive thing they’re engaging in from week to week. They might be developing their bike skills but it’s really about building up their life skills.”

John Kavanagh emerges from the yard waving huge chopper handle bars like a trophy and he proceeds to take the existing handle bars off his mountain bike so he can replace them.

“Hmm, I think the brake cables will be too short for those handle bars,” warns Semple.

“It will look classic,” agrees Calvin, who’s leaning across the pool table.

Three of the older kids who worked with the bike project recently did City and Guilds bicycle mechanics exams and are working full time in local bike shops.

“What’s gas is some of the first professionally qualified bike mechanics in Ireland are either young people who came through Bradog or Traveller lads from the Clondalkin Travellers Group,” says Semple. “I think that’s pretty cool.”

Eighteen-year-old Darrel Edgar has his certificate, works full time in the Bike Institute, a shop on Dorset Street, and comes back here regularly to help out.

“I knew the majority of [the exam syllabus] just from being here,” he says. “Fixing bikes is my thing now, but it’s nice to get a cert to say I’m qualified.”

The project also endeavours to get the participants cycling and out of the city and some have participated in the Paris2Nice charity cycle as part of the Irish Youth Foundation’s team.

“We also had a group of lads that did the Wicklow 100 ,” says Semple. “All our lads on these weird looking bikes blowing past all these lads on super-fancy carbon bikes, there was something very satisfying about it. Darrel had a little portable speaker in the back pocket of his jersey banging out tunes as he passed.”

Darrel is now an avid road cyclist. I ask him what he would be doing if he hadn’t discovered this project? “I’d probably have been arsing around doing nothing,” says Darrel. “Instead I was going to work after school…It opened up my mind.

“It never occurred to me to cycle up the mountains before. Forty minutes away and you’re on top of the mountains on a bike and can see everything, and if you keep going you go to more places and then more places. You realise there’s a lot more out there.”