The shortest day: Celebrate the solstice like the Celts 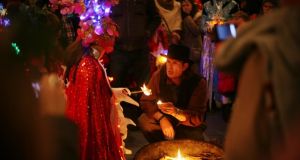 Lighting the solstice fire at last year’s celebration, at the Grangegorman DIT campus.

The celebration of the winter solstice has its roots in many cultures worldwide, particularly the Celtic tradition, where druids – wise women and men – would cut the mistletoe that grew on the oak tree and offer it as a blessing each year.

The winter solstice tradition dates back to before the Celts, however, as evidenced by the underground cairn in Newgrange, Co Meath, constructed in 3300BC, which is illuminated by the sun at dawn on December 21st.

On the solstice this Thursday, Smashing Times Theatre and Film Company and Slí an Chroí, in partnership with Dublin City Council and Dublin Institute of Technology (DIT), are running the eighth annual City of Dublin Winter Solstice Celebration Festival.

The event, involving storytelling, poetry, music, arts and craft, a parade and a fire ceremony, is based on the Celtic celebration of the shortest day, and longest night, of the year. It marks the return of the light, as the days begin to lengthen once more, which is seen as an occasion of rebirth and renewal.

Smashing Times and their partners are inviting visitors and citizens to come to Grangegorman DIT campus to join in in the family-friendly festival, which includes a storytelling session, a grand céilí, face-painting, and craft-making, followed by a parade as attendees gather together and journey from Grangegorman down to Smithfield Square.

The event is a colourful gathering of local communities and national and international visitors which will culminate in a powerful and moving fire ceremony in Smithfield Square.

The celebration invites people of all ethnicities and cultures to take part. All activities are free of charge. Additionally, participants can meet with the sun and snow princesses, and throw their withies in the flame as they make their wishes for the coming year.

Warm clothing is advised, while red and yellow colours are preferable. Battery-operated lanterns, drums, or rattles are also welcome.

Below is the timeframe of the festival on the day: