‘A three-stor hotel? For me that’s the equivalent of a stable’ 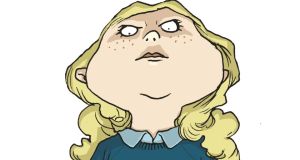 Honor goes, “What the fock are we doing in Cork anyway?” and I end up having to laugh because it’s honestly like listening to myself.

We’re here for the wedding of some random girl who was in UCD with Sorcha. We’re supposed to be staying in Jurys Inn on Anderson’s Quay, except there’s a problem. They don’t have our reservation – and that’s mainly due to the fact that I didn’t bother my orse making one.

Sorcha is giving the dude on reception absolute hell. She’s going, “Well, you should have our booking because my husband made it – how long ago was it, Ross?”

And I’m like, “Er, yeah, no, it was the day the wedding invitation arrived. You told me to go and book the hotel and I did it straight away.”

We’re going to end up staying somewhere with only three stors. Which for people like us is like staying in a stable

The dude goes, “Do you know who you spoke to?”

“It was, er, a woman with an up-and-downy accent. And that’s not me being racist against Cork people. Anyway, can we not just make a reservation now?”

“I’m sorry,” the dude goes, “we’re full. You’re going to find it very difficult to find a room in the city in Christmas week. I could give you a list of B&Bs. There’s some nice ones on the Western Road. ”

Sorcha tells him she expected more from Jurys Inn and she wonders what the new owners of the group will think about this because she’s certainly going to write to them to tell them. Then she storms off.

The dude hands me the list of B&Bs and goes, “You didn’t make a reservation, did you?”

Sorcha is in a fouler anyway. She insisted on driving down here in her – believe it or not – Nissan Leaf and the battery capacity bor was for some reason stuck at one hundred percent the entire way. So there was the stress of not knowing how much power was actually left in it and I possibly didn’t help matters by saying that, if I had my way, the only cors that would be allowed on motorways would be German-made with an engine size of not less than two litres.

I follow Sorcha and Honor out to the cor pork and that’s when it hits me. “Oh my God,” I go, “it’s Christmas week – and we’ve literally just been told there’s no room at the Inn.”

“And now,” I go, “we’re going to end up staying somewhere with probably only three stors. Which, for people like us, is the equivalent of staying in a stable.”

Sorcha takes out her cor keys.

“Well,” Honor goes, “at least we’re not travelling there on a donkey.”

The Nissan Leaf beeps. I end up having to bite my lip.

A short while later, we’re knocking on doors on the Western Road and we’re getting the same answer we got at the Inn – you’ll be lucky to find anywhere this close to Christmas.

After a third PFO in a row, Sorcha’s phone suddenly rings. She looks at the screen. “Oh my God,” she goes, “it’s Treasa Dorsey,” whose daughter Maoliosa is in Honor’s class. “Why is she ringing me at this time of night?”

I can tell that Honor knows why from the way she arranges her features in a look of defiance.

Sorcha listens for five minutes without saying anything except, “She did what?” and, “Treasa, I’m so sorry!” and, “You can rest assured I’ll speak to her!” and then she hangs up.

Sorcha’s there, “Her problem, Honor, is that you upset Maoliosa.”

“She said on Facebook that her Mom took her to Disneyland Paris last weekend. She actually took her to the Disney Store on Grafton Street.”

“And you posted that underneath her selfie with Donald Duck and humiliated her online.”

I’m there, “I wouldn’t agree one hundred percent with that analysis, Honor. Sometimes we have to tell lies to protect ourselves.”

“What, like when you pretended back there that you made the reservation for Jurys Inn?”

We’re in an unfamiliar land where I’ve never felt one hundred per cent safe. But I feel weirdly at peace

Sorcha ends up totally losing it. “No,” she goes, “let’s not just move on. Why do you have to be so horrible, Honor?”

“You heard me. Maoliosa’s parents can’t afford to take her to Disneyland so she engaged in a bit of hormless make-believe on social media. And you couldn’t wait to burst her bubble.”

“Er, you could actually see that it was Grafton Street?”

“You who’s been spoiled rotten since the day you were born, who’s been given everything you’ve ever asked for in life and who doesn’t have a kind word or thought for anyone.”

I’m about to go, “Okay, Sorcha, enough,” because it’s like listening to someone slagging off Leinster. I’ll only listen to it up to a point. Then I’ll go, “Hey – that’s my team.”

And that’s my daughter.

But that’s when Honor says it – totally out of the blue. She goes, “I’ll pay for them to go to Disneyland Paris.”

I’m like, “Don’t be a mug, Honor. An apology should be enough for them.”

But Sorcha goes, “No, Ross, let’s hear what she has to say.”

“I’ll buy them the tickets,” she goes. “Out of my savings,” and she walks ahead of us towards the next B&B on the list.

I look up at the sky. Father Fehily used to say there’ll be times in your life when everything will feel so right with the world that you’ll look up at the stors and feel like God put every one of them up there for you.

I have literally no idea where we’re going to sleep tonight. The Nissan Leaf would be my guess. Like Joseph and Mary, all those – I don’t know – millions and millions of years ago, we’re in an unfamiliar land where I’ve never felt one hundred per cent safe. But I feel weirdly at peace.

Honor looks over her shoulder and goes, “But don’t you dare tell anyone I did it. I don’t want people to think I’m weak.”

And Sorcha slips her orm through mine and she whispers, “There it is, Ross. There’s your Christmas miracle.”