Women’s Podcast: ‘I declared out loud that I wanted to be chief executive of eir’ 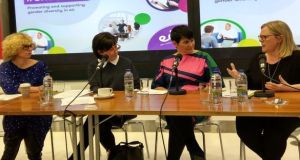 “I made myself visible and I actually declared out loud that I wanted to be CEO of eir,” says Carolan Lennon, three days into her job as the first woman to lead the telecoms company.

Lennon, who is in favour of gender quotas on boards, says companies hiring a new chief executive will often go for someone who resembles the last person to hold the job – generally a man – even if just subconsciously.

As a woman, saying out loud that you want the job can make a difference.

“I do think with women that if you want it, you need to declare it . . . the big problem for women is that visibility,” she told Kathy Sheridan, on a special live episode of the Women’s Podcast in association with the Dress for Success campaign.

It’s not just the saying, but the doing too, says Lennon, who took short maternity leaves with her three children and told her boss not to forget about her, to keep her in the loop while she was not in the office.

It worked and she came back to work each time with a promotion, after being made aware of opportunities as they arose.

“I think my boss, if I hadn’t told him, ‘don’t forget about me, let me know’, probably would have thought he shouldn’t disturb me on maternity leave. But I gave him permission to keep me in the loop,” she said.

Lennon was joined by Dress for Success founder, the designer and businesswoman Sonya Lennon, and AIB’s head of diversity and inclusion, Gillian Harford, for a wide-ranging conversation about women in the workplace on the podcast, recorded at eir HQ in Dublin.

The panel recalled challenges that they have faced in their careers, with Harford sharing a story about being on an interview panel with a male colleague who gave female interviewees extra points for matching shoes and handbags.

“I was sitting there thinking, ‘do I have to give a boy extra marks if he has a shirt and tie that are matching?’ And none of them could understand why I thought this was a little bit strange,” she said.

Harford has overseen the implementation of policies such as paid paternity leave and Minding the Gap – a programme aimed at integrating family absences like maternity leave into career planning – in her role at AIB.

She says that men and women both want flexibility at work, but it is viewed as career limiting and that needs to change.

“If we can make family absences still be part of a career, rather than separate, then it becomes more attractive to both men and women,” she said.

Also up for discussion on the podcast was the gender pay gap and the figures coming out of new mandatory reporting in the UK last week, which found that at the more than 10,000 firms that submitted details on wage transparency, 78 per cent pay men more than women on average.

Similar wage transparency legislation is due to be initiated in Ireland and Dublin Dress for Success founder Sonya Lennon will be at Leinster House for the first all-party committee to look a gender equality in the workplace next month.

She says there is a real opportunity for legislators here to get it right the first time.

“What people are saying is, ‘yeah, yeah we know that there’s a problem. How do we fix it?’ And that’s where companies can get great kudos for getting ahead of the march, for disclosing early and having the right ethos around how to make it better.”

Billie Eilish: Her stance that her body is not public property is still a radical act
7

Irish in Britain: How do you feel about ‘Brexit day’?
9