Tryanuary: the best time of the year to sample new beers

Beerista: Initiative aims to support small breweries at one of the quietest months of the year 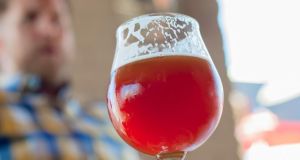 January is a great month to try something a little different, like a barrel-aged ale or a fruity sour

January is a tricky month for many small businesses, particularly breweries and bars that are hit hard in the aftermath of Christmas – not to mention all the talk of new year’s resolutions. Add to that the increased VAT rate, which comes into force this month, and the hospitality industry is facing into a very challenging start to the year.

So it’s a good time to support your local independent brewery or pub. Even if you are trying to cut down on alcohol, there are plenty of lower and non-alcohol craft beers available now while many pubs have upped their game in terms of more interesting alcohol-free options.

It’s also a good month to branch out and try something a bit different – which is the idea behind Tryanuary. Founded in the UK, the initiative aims to support smaller breweries during this quiet month by encouraging people to get a little more adventurous in their tasting habits. So if you’re a dedicated stout or IPA drinker, next time you’re out try something from a new brewery or a different style of beer like a barrel-aged ale or a fruity sour. And if you haven’t tried a cask beer yet, the Franciscan Well’s Strange Brews and Cask Beer festival is taking place in Cork at the end of the month and is definitely worth a visit.

There were a few bar openings in 2019 that I’ll be catching up on too this month, such as Waterford’s Grady’s Yard and the Big Romance on Dublin’s Parnell Street. I’m also curious to try beers from the new Wide Street Brewing in Ballymahon, Co Longford, that specialises in mixed and wild fermentation, while Dead Centre’s new brewery and taproom in Athlone is due to open early this year and is already looking very interesting.