Who is Carrie Symonds, the UK’s ‘first girlfriend’?

Boris Johnson’s partner overhauled his image. Will she also influence his premiership? 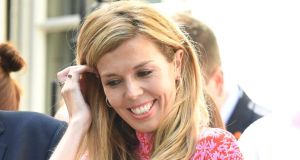 It’s official: Carrie Symonds has moved into Downing Street with Boris Johnson, making them the first unmarried couple to live in the British prime minister’s official residence. That earns her the title of “first girlfriend”, at least according to some British newspapers.

So who exactly is Carrie Symonds, and how did she find herself as one of the chief supporting characters in the Brexit drama?

The 31-year-old is the daughter of Matthew Symonds, a founder of the London Independent, and Josephine McAfee, a former lawyer at the now online-only newspaper. She was educated at the prestigious Godolphin and Latymer School, in London, an upper-class institution that refers to its alumni as Old Dolphins. Other past pupils include Nigella Lawson, the actor Kate Beckinsale and the politician Annunziata Rees-Mogg (sister of Jacob).

After school Symonds studied art history and theatre at the University of Warwick; while she was a student there she became one of the victims of John Worboys, the serial sex offender known as the Black Cab Rapist. She gave evidence against him at his trial and later, after waiving her anonymity, campaigned against his early release.

After university she was hired as a press officer by the Conservative Party; she also worked on Boris Johnson’s campaign to be re-elected mayor of London in 2012, and became an adviser to Sajid Javid, Amber Rudd and Michael Gove.

After the British general election of 2017, at the age of 29, she became the Conservative Party’s director of communications – its youngest ever – and was named the UK’s second most powerful public-relations professional by PR Week.

She left that role last year – the Daily Mail quoted an “insider” who said Symonds had sometimes been “shockingly indiscreet in her loyalty to Boris and criticism of Theresa May” – and now advises Oceana, a conservation charity whose celebrity supporters include Pierce Brosnan, Sting and Barbra Streisand. Indeed, she describes herself as a conservationist in her Twitter bio, and regularly tweets about puffins, trophy hunting, and overfishing.

Symonds reportedly became romantically entangled with Boris Johnson last year. He was among the guests at her Abba-themed 30th-birthday party, where he is said to have demonstrated himself to be a surprisingly good dancer. (In fairness, the bar is low when it comes to Tory heavyweights dancing to Abba.)

Last autumn, after it was announced that Johnson had separated from Marina Wheeler, his wife of 25 years, amid allegations of infidelity, Symonds was quickly unmasked as the proverbial other woman. The papers were soon full of intimate details about their relationship, including that she affectionately refers to him as Bozzie Bear and that he calls her Otter.

Since then Symonds has been credited with overseeing Johnson’s physical transformation and nudging him to the left on issues around feminism and the environment. The Daily Mail referred to her as the woman who’s reinvented Boris – “The slimmer figure! The sleeker hair! The whale-hugging image!” – while the Daily Express called her “the steely blonde who’s whipped Boris into shape”.

Her red dress inspired countless articles, and quickly sold out. That in turn inspired more articles, and prompted the Telegraph to ask, ‘Is Carrie Symonds fashion’s new favourite influencer?’

But it hasn’t all been plain sailing. Last month police were called to the couple’s London apartment after neighbours heard the pair fighting. Symonds reportedly told Johnson to “get off me” and “get out of my flat”.

Johnson later dodged questions about the incident, which the neighbours had reported to the Guardian newspaper; Symonds considered the publicity to be a politically motivated stitch-up, according to the Sun. A few days later a not-so-candid photograph of the couple “smiling in the Sussex countryside” made its way to the newspapers. The photographer’s identity was never disclosed, leading to accusations that the scene had been staged by Johnson’s PR team.

Nevertheless, the couple rode out the storm, and last week, as Johnson arrived at Number 10 after becoming the UK’s new prime minister, Symonds was standing on Downing Street to welcome him. Her red floral dress, from the British label Ghost, inspired countless articles, and the dress quickly sold out. That in turn inspired more articles, about where to source copycat looks, and prompted the Daily Telegraph to ask, “Is Carrie Symonds fashion’s new favourite influencer?”

Some of her friends are hopeful that she will also influence Johnson’s premiership. Last week Nimco Ali, an anti-FGM campaigner, wrote a piece in praise of Symonds for Grazia. “Carrie, like me, is someone who wants to deliver a better world for the next generation and she is a woman who gets things done.”

In other words, this is likely not the last you’ve heard of Carrie Symonds.