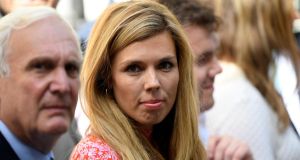 Carrie Symonds is moving into Downing Street with Boris Johnson today after weeks of speculation about whether she would join him.

The new British prime minister and his partner will occupy the large flat above No 11, despite the chancellor, Sajid Javid, having a bigger family with four young children.

Johnson’s deputy spokeswoman said the couple would be moving in officially today, with Symonds taking up residence there with him. There had been speculation that she might not join him in Downing Street after she was seen moving furniture into a house in southeast London with her mother.

Johnson and his partner have not been seen publicly together since they were recorded by a neighbour in the Camberwell area of London having a late-night row during the Conservative Party leadership contest. After the row, newspapers printed an apparently old photograph of the couple that seemed to have been released by Johnson’s campaign team as part of its PR strategy.

But Symonds joined staff members and supporters of Johnson outside the steps of No 10 as he entered for the first time as prime minister last week.

Johnson split with his second wife, Marina, last September. The couple had been together for 25 years.

Johnson is not thought to be moving any of his children into Downing Street, and the spokeswoman declined to comment on whether they would get police protection as members of the prime minister’s family.

After reports that Johnson had asked for new furniture to be bought, his spokeswoman said: “There will not be any additional cost to the taxpayer of her [Symonds] living there.”

Symonds is not believed be getting taxpayer support for an adviser or a clothing budget as some previous occupants of Downing Street have done.

Javid is expected to stay in his family home in west London rather than move to the two-bedroom flat above No 10. – Guardian

Should women erase men from their lives? This writer thinks so
10